Dead Reckoning, directed by John Cromwell, is a 1947 film noir about a man (played by Humphrey Bogart) who sets out to find out what happened to an army buddy whato disappeared immediately after returning from World War 2. It has all the standard noir elements – smooth gangsters, colourful hoodlums, night clubs, a flashback with voiceover, and of course a femme fatale.

The femme fatale in this case is played by Lizabeth Scott, and she sizzles. But then she always did. Once you hear that husky voice of hers you know you’ve entered the world of film noir. Her performance in this movie has been much criticised, and quite wrongly in my opinion. The movie has its problems but she’s not one of them. 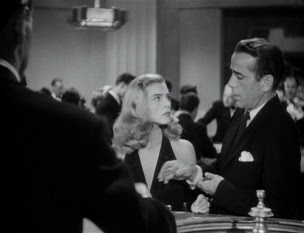 Murdock tells the tale in an extended flashback. He and Sergeant Johnny Drake are on their way to Washington. The war is over and they’re both going to collect medals, but Johnny disappears. He disappears because there might be press photographers at the medal presentation and that could be embarrassing since he isn’t Johnny Drake at all. In fact he’s a man wanted for murder who joined up under a false name. 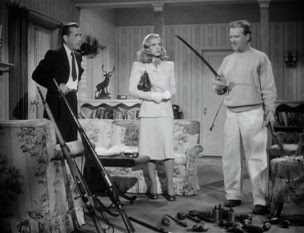 Murdock sets off to find his buddy but what he finds is a badly burned corpse in the morgue. Is the body Johnny’s? Murdock’s starting point is that he knows Johnny couldn’t have been mixed up in murder and know he’s determined to unravel the mystery.

His next step is to find Johnny’s girl. Dusty (Lizabeth Scott) is a singer. He thinks she’s the key to the mystery, and he’s right. But falling in love with her means that Murdock doesn’t want to believe she’s the murderer. He also doesn’t want to believe Johnny is the murderer but somebody shot Dusty’s husband and if it wasn’t Dusty and it wasn’t Johnny then he’s left with an embarrassing lack of plausible suspects. 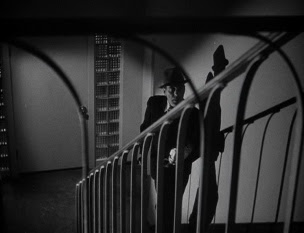 Dead Reckoning has been accused of having a totally incoherent plot. Which is perfectly true. But this is film noir and plot coherence is less important than atmosphere and style and those qualities it has in spades. It also has enough classic film noir dialogue to keep any fan happy, as when Murdock observes that, “Maybe she was all right. Maybe Christmas comes in July.”

And it has Bogart, and he’s in top form. He knows that Dusty is the kind of girl you should never ever fall in love with but somehow he desperately wants to believe that all his instincts are wrong. Bogart and Scott work well together and Scott not only makes Bogart want to believe in her she makes the audience want to as well even though we know as well as he does that she’s probably no good. So maybe it’s not one of the great noirs but it’s consistently entertaining, it looks good and it’s dripping with noirness. And it has two of the iconic noir stars demonstrating why they’re such iconic figures. So I say check it out.
Posted by dfordoom at 5:12 PM