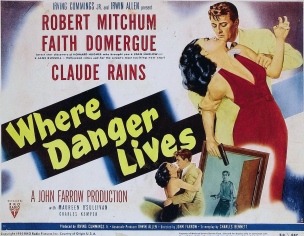 Australian director John Farrow made only a handful of movies that could be described as film noir but the ones he did make are exceptionally interesting, and the best of them may well be his 1950 production for RKO, Where Danger Lives.

This is a somewhat underrated entry in the noir cycle and it’s rather odd that it hasn’t received more attention. It was an A-picture with some big name stars (Robert Mitchum and Claude Rains) made by a well-respected director and it not only ticks most of the noir boxes it also has some interesting features of its own.

Mitchum plays a dedicated young doctor named Jeff Cameron. He loves his work, he’s highly thought of and he’s engaged to be married to an equally dedicated nurse (Julie, played by Maureen O’Sullivan). Life is good and it promises to get better. Then fate steps in. Just as he’s about to leave the hospital to go on a date with Julie he’s called back to attend an emergency, an attempted suicide. 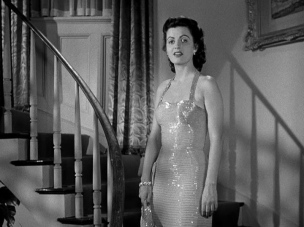 The attempted suicide is Margo (Faith Domergue). She’s not in any real danger but she seem a little evasive, and the guy who brought her in seems even more evasive. The following morning when Jeff goes to check on her he discovers she’s given a false address and has discharged herself. Then he gets a cable from her, asking him to meet her at a night-club.

He’s instantly smitten by her. She’s sexy and glamorous and (given the fact that she’s just tried to kill herself) she’s obviously emotionally disturbed. He’s a sensitive man who’s devoted his life to helping people (we discover as the movie progresses that he really is a man who chose medicine as a career for the highest motives and is relatively indifferent to money). A man like that really doesn’t stand a chance - here’s a chance to save somebody who also happens to be sex on legs. Pretty soon they’re dating. 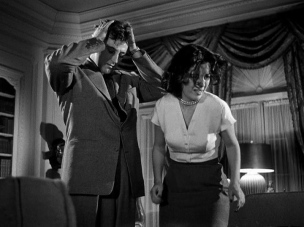 She tells him her sad story. She lives with her father, an elderly man with not long to live who is something of a control freak. He could, and would, cut her off without a penny (and he’s a wealthy man) if she wanted to mary a man he didn’t approve of. And it sounds like he’s a man who’s unlikely to approve of a penniless young doctor who doesn’t even have a practice of his own. Of course she loves Jeff and wants to marry him but she tells him it’s going to be tricky handling her father. Jeff doesn’t care about her father’s money. He just wants to marry her. After having a few too many drinks he turns up at her house with the intention of trying to talk the old boy around and he quickly discovers that nothing that Margo told him was true. Most importantly, Mr Lannington (Claude Rains) is not her father.

Things get out of control rapidly, there’s a struggle and Mr Lannington attacks him with a poker. Jeff punches him and Lannington is knocked out cold. Jeff had received a very nasty blow on the head and he’s extremely groggy but everything is OK, he’ll just get some water and bring Lannington around and then he can leave and go back to his decent ordinary everyday life. He just needs to put his head under some cold water to clear it a bit. When he returns from the bathroom he finds that everything is not OK and he’s not ever going to be able to go back to the daylight world. He’s trapped in the noir nightmare world and there’s no escape. Margo announces that Lannington is dead. 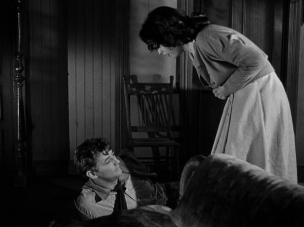 Jeff still thinks everything is not lost. After all it was a clear case of self-defence. But he’s very groggy and he just can’t think straight and Margo tells him nobody will believe him but it’s OK because she has two plane tickets booked for Nassau and they should just head for the airport. Jeff isn’t sure that’s a good idea, they should just call the police and explain everything, but his head is swimming and maybe Margo is right. The airport turns out to be a bad idea and pretty soon they’re in her car heading for the Mexican border and the noir nightmare world has claimed them well and truly.

Jeff is not your typical noir protagonist. He’s not a chump. He’s not the kind of guy who would normally be caught in this kind of nightmare. He’s not a Walter Neff, with the seeds of corruption already inside him just waiting to blossom. It’s the blow on the head that dooms him. All the evidence he needs to work out what is really going on is there before him and normally he’d work it out in quick time but his head just keeps spinning and he can’t put his thoughts together.

Mitchum is terrific, as always. Faith Domergue is the big surprise. She’s not particularly well thought of as an actress (she got her contract with Howard Hughes for the usual reasons) but she’s perfectly cast and does a fine job in a difficult role. Margo isn’t quite the typical femme fatale -she’s clearly not playing with a full deck and we’re never quite sure just how conscious she is of what she is doing and the effects it has on others. The ambiguity is never fully resolved, one of the features that make this movie slightly unusual as 40s Hollywood movies go. 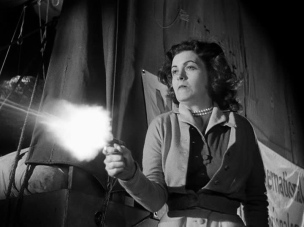 John Farrow shows himself to be a master craftsman. His framing of the scenes involving Mr Lannington, Jeff and Margo is constantly shifting reflecting the unstable dynamics between the three of them, with Jeff and Margo seeming to be drawn together at one moment only to be split apart the next. At times Lannington recedes into the background and seems insignificant only to be suddenly brought into the foreground as the power shifts. The scenes between Margo and Jeff show the instability and ambiguity of their relationship. One moment they seem to be synchronised and then we realise they’re not in tune at all. It’s all done with subtle manipulation of the framing.

Farrow makes extensive use of long takes. One vital scene is done in a single shot, seven minutes without a single cut. Farrow was apparently a prickly character and even more than most directors he detested having his work interfered with. Perhaps long takes were his way of preventing studio interference. When you do your most crucial scenes in very long takes there’s not much the studio can do - they can’t eliminate the scene or shorten it or recut it. Either way it’s a technique that requires not only great skill and self-confidence from a director but also enormous confidence in his actors, and Mitchum and Domergue are equal to the challenge.

Farrow has the advantage in this film of having the great Nick Musuraca as his cinematographer. That, combined with an intelligent and literate script by Charles Bennett, superior acting performances and a director who is in complete command of his craft, makes Where Danger Lives an object lesson in just how good classical Hollywood film-making could be. Highly recommended.
Posted by dfordoom at 3:29 PM