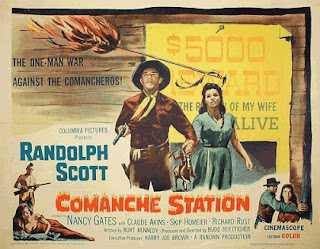 Comanche Station was the last entry in the Ranown cycle of Budd Boetticher-directed westerns starring Randolph Scott. Connoisseurs of westerns rate these films very highly indeed. I’d previously only seen 7 Men From Now which I loved. Comanche Station was released in 1960.

The movie starts with Jefferson Cody (Randolph Scott) riding into a Comanche village to trade. What he’s trading for is a woman, a Mrs Low (Nancy Gates). We lear later that many years before Cody’s wife had been taken by Comanches and that he’s still obsessively looking for her. Every time he hears a rumour that the Comanches have taken another white woman he sets out to get her back.

Cody and Nancy Low make it to Comanche Station, a coach stop, before the Comanches attack. Cody fights them off, with some help from Ben Lane (Claude Akins) and Lane’s two followers, Frank (Skip Homeier) and Dobie (Richard Rust). In some ways it’s help Cody could have done without. He knows Ben Lane. He got Lane drummed out of the army years before. He knows that Lane is is totally untrustworthy and unscrupulous. And there’s worse news. Mrs Low’s husband has posted a reward of $5,000 for the return of his wife. $5,000 is likely to be a mighty big temptation for a man like Lane.

What Cody doesn’t know is that Mrs Low’s husband has offered the reward for her return, dead or alive.

It’s a long way to the next town and they’re going to be shadowed night and day by the Comanches.

The stage is set for a suspense-filled movie but there’s plenty of character interest as well. Cody is one of those tortured 1950s western heroes, an obsessive man haunted by memories. Lane is a memorable villain but Lane’s two henchmen are more interesting. Especially Dobie. Dobie is not cut out to be a villain. He’s fundamentally a decent enough young man who’s lost his way. Maybe he could still find redemption. Maybe.

The plot really is very simple. Probably deliberately so. The focus is on the visual splendour of the landscape and the struggle between two obsessive men - one obsessed by the search for his long-vanished wife, a search that even he knows is hopeless, while the other’s obsession with money. Both obsessions might well be equally destructive.

Randolph Scott gave consistently excellent performances for Boetticher and he’s terrific here. Complex westerns such as this and Sam Peckinpah’s Ride the High Country certainly brought out the best in Randolph Scott. And the older Scott got the better he got, bringing a nice sense of world-weariness to his rôles. Jefferson Cody is a good man but there’s a certain emptiness to him - his obsession is all he has in life.

Westerns were changing in the 1950s, becoming more complex, more ambiguous and more grown-up. Comanche Station reflects this. There are some “adult themes” which wouldn’t have been dealt with so openly a decade earlier. It’s not actually stated but it is strongly implied that Mrs Low was raped by the Comanches. It’s also strongly implied that when a woman is taken by the Comanches and escapes or is returned to her husband in some other way the husband doesn’t always want her back, for this very reason. The fact that Nancy Low’s husband has offered the reward for her dead or alive suggests that he assumes that she will have given herself sexually, willingly or unwillingly, to the Comanches.

Or of course it could suggest other motivations. The matter is left ambiguous until the end.

Nancy Gates gives a solid performance but Mrs Low is a somewhat underwritten character. She’s just there to add some sexual tension and to make the stakes higher in the struggle between Cody and Lane.

Umbrella’s Region 4 DVD is totally barebones but it’s dirt cheap and it offers a good 16:9 enhanced transfer (the film was shot in the Cinemascope aspect ratio). There are various other DVD and Blu-Ray releases available.

Comanche Station is a simple rather poetic film with a definite mythic overtone. Cody could be the hero of a Greek tragedy, doomed to wander endlessly looking for something hopelessly and irretrievably lost. He doesn’t want the $5,000 and he doesn’t want Nancy Low. What he wants is something he can never find and he will never stop looking. Ben Lane can win if he can kill Cody, but even if Cody succeeds in killing Lane first he can’t really win.

Comanche Station is highly recommended.
Posted by dfordoom at 6:07 PM