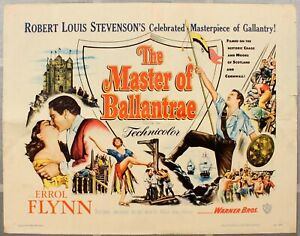 The Master of Ballantrae is a late Errol Flynn swashbuckler (released in 1953) but it’s worth a look.

Flynn plays Jamie Durie, the Master of Ballantrae. In the 45 Rebellion the Durie family comes up with a clever plan to preserve the title and their estates. Jamie, the elder brother, will join Charles Edward Stuart, the Young Pretender (popularly known as Bonnie Prince Charlie) in his rebellion. His younger brother Henry (Anthony Steel) will remain at home and will remain loyal to King George II. Whether the rebellion succeeds or fails one of the Duries will be on the winning side and the family’s fortune should be secure.

It’s a good deal for Henry. If the rebellion fails he will get to be Master of Ballantrae, which is what he always wanted. He will also get to marry Lady Alison (Beatrice Campbell). He always thought he would be a more suitable husband for her than Jamie. 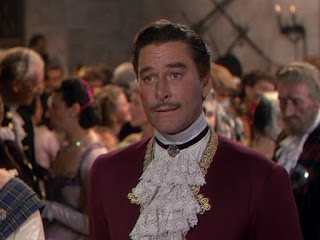 Jamie Durie is the elder but wilder brother, a man who likes wine, women and gambling. Henry is the dull sensible one. Not surprisingly they’re not overly fond of one another.

The rebellion ends in disaster at Culloden and the English take their revenge on the Scottish rebels. The rebels are now being hunted down. Jamie hopes to escape to France on a smuggling ship along with an equally wild Irishman with whom he has hooked up, Colonel Francis Burke (Roger Livesy). They are betrayed to the English, Jamie blames Henry, there is a fight and somehow Jamie makes it to the ship. But his adventures and his troubles have only just begun.

Jamie has a future as a pirate but Scotland is always in his thoughts. He dreams of returning to reclaim his inheritance, and to reclaim Lady Alison. But first he must make his fortune, and piracy is a competitive business. 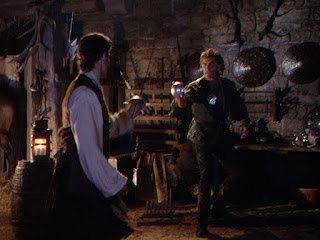 Returning to Scotland would be a dangerous thing to do. Which of course is unlikely to stop Jamie.

The years (or rather his debauched lifestyle) were starting to take their toll on Errol Flynn but he still has star quality and he can still play the swashbuckling hero. And he’s obviously well suited to playing an irresponsible but loveable rogue (being an irresponsible but loveable rogue himself). He looks dissipated but Jamie is a character who should look dissipated.

There’s no question that the English are the bad guys in this movie. The movie expects the audience to unhesitatingly take the side of the rebels. 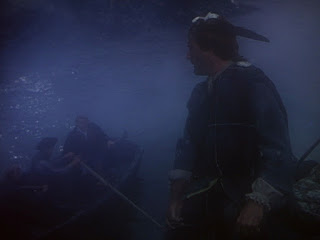 This Warner Brothers release was an Anglo-American production, shot in Scotland, England and Italy with a mostly British cast (and some great British character actors like Felix Aylmer). Having Jack Cardiff as the cinematographer certainly helped. Director William Keighley does a fine job as well.

This story of revenge, betrayal and adventure is based on the novel by Robert Louis Stevenson, a man who knew a thing or two about writing tales of adventure. Stevenson is a very underrated writer and The Master of Ballantrae is one of his most celebrated novels. The movie lacks some of the complexity that Stevenson could bring to such a tale and the focus is on the straightforward revenge plot. 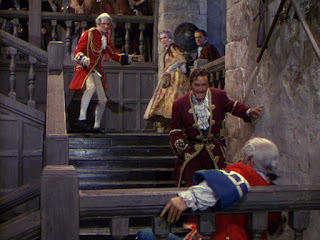 The film was shot in Technicolor. The Warner Archive release offers a reasonable transfer.

The Master of Ballantrae isn’t one of the great swashbucklers but like another late Flynn swashbuckler, Adventures of Don Juan, it’s better than you might expect. Flynn isn’t as energetic as he was in his heyday but he has lost none of his charisma and this movie still provides plenty of action and romance. And it looks great with some fine location shooting.

The Master of Ballantrae is an enjoyable ride and it’s recommended.
Posted by dfordoom at 2:12 AM