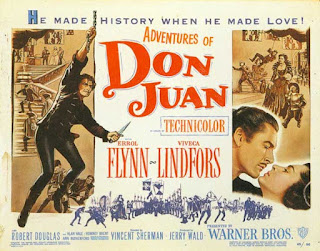 Don Juan de Maraña (Flynn) is a Spanish nobleman living in England. He devotes his life to the pursuit of pleasure and to Don Juan that means the pursuit of women. He enjoys extraordinary success in these endeavours. He also spends a good deal of time avoiding the vengeance of irate husbands. He is aided and abetted by his faithful servant Leporello (Alan Hale). Don Juan has the misfortunate to get himself mixed up in the projected marriage between a very important English lady and an equally important Spanish gentleman. He gets caught in the lady’s bedchamber, which leads to certain misunderstandings. He is sent home to Spain in disgrace. 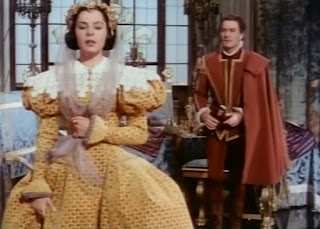 Queen Margaret of Spain (Viveca Lindfors), is inclined to be merciful. She gives him a job as a fencing instructor. Don Juan, who desires no more than to be allowed to continue his pursuit of pleasure, finds himself unwittingly caught up in intrigues at the Spanish court. The King, Philip III, is a well-meaning mediocrity caught in the middle of a power struggle between his minister the Duke de Lorca (Robert Douglas) and the Queen. The Duke wants war with England. Queen Margaret wants peace.

Don Juan tries to reform. He tries really hard. It’s just that somehow he keeps ending up in situations that husbands misinterpret. With an enemy at court as powerful as the Duke de Lorca he inevitably finds himself in trouble. In fact he finds himself imprisoned and awaiting execution. 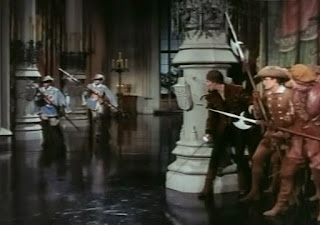 He’s not the only one in trouble. The Duke de Lorca is aiming to make himself the real power in Spain, with the King as a mere figurehead. And Don Juan’s old friend and protector, the Count de Polan, is also in trouble with de Lorca. Don Juan has to get himself and the Count out of trouble but he has an even greater task - he must find a way to save the Queen from the machinations of de Lorca.

It’s a recipe that offers plenty of opportunities for both romance and action. And also for humour. This is a rather witty swashbuckler with a certain tongue-in-cheek flavour.

Perhaps Flynn doesn’t quite have the manic energy he once had but he still has charisma to burn, he still has charm and he was always a much better actor than he was ever given credit for. Here he gives an amused slightly cynical performance with a definite twinkle in his eye. Don Juan is a rogue but in his own perverse way he has a very strong sense of honour. He has the pride of a Spanish nobleman. He dislikes violence which can lead his enemies to underestimate him. He will allow himself to be pushed only so far. He’s also a man who has no illusions about himself. He does not see himself as a hero - it is a rôle forced upon him by fate. Flynn captures the subtleties of the character extremely well. It’s a very fine performance. 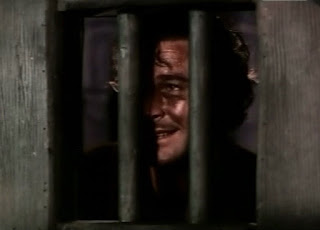 Robert Douglas plays de Lorca as a thorough-going villain, cruel and arrogant. He’s a worthy villain for our hero. Viveca Lindfors is fine as the Queen, imperious but human. Alan Hale is of course fun as he was in his many appearances with Flynn. Look out for Raymond Burr in a small part.

Warner Brothers spent plenty of money on this movie (and it did well at the box office). The sets are sumptuous, the costumes are gorgeous. It’s in Technicolor and generally it’s pretty visually impressive. The climactic fight on the staircase is a highlight.

The difficulty with the romance angle is that Don Juan has finally found a woman for whom he would gladly give up his wicked ways but she is a queen. She will have to choose between love and duty, as will Don Juan. It’s a difficulty but it does make this an interesting swashbuckler. 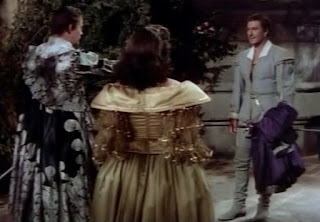 Adventures of Don Juan has had a number of DVD releases. I caught this film on TCM so I can’t comment on the quality of the DVDs.

Adventures of Don Juan has perhaps more of a bitter-sweet tone (even with just a hint of melancholy at times) but in its own way it’s a fine example of the Errol Flynn swashbuckler, with plenty of action, fun and wit and with a masterly performance by Flynn. Highly recommended.
Posted by dfordoom at 2:02 AM