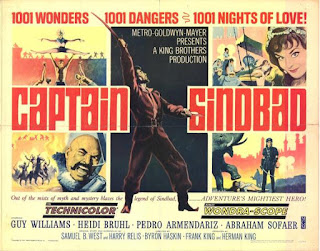 Before I go any further I should note that a lot of people seem to be very confused by the spelling of the hero’s name as Sindbad rather than Sinbad but in fact there’s no mystery - Sindbad is a perfectly acceptable English spelling of his name.

The king of Baristan is old and ailing and all real power is now in the hands of the tyrant-magician El Kerim. To cement his power he intends to marry the king’s beautiful daughter Jana. Princess Jana is appalled by the prospect. She is in love with the handsome dashing seafarer-adventurer Sindbad. 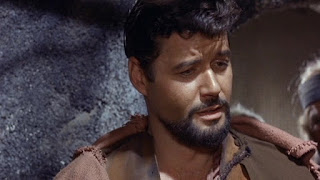 The kindly magician Galgo would like to help her but El Kerim has a hold over him. Galgo does what he can, such as turning Jana into a bird so she can fly off and find Sindbad.

El Kerim has plans to get rid of his rival. Sindbad’s ship is attacked by giant birds that drop huge rocks onto the deck, sinking the ship (a sequence that is executed extremely well). But it takes more than that to kill a mighty hero and we know that Sindbad will return to deal with El Kerim. He’ll have to be quick since the wedding of El Kerim and Jana is to take place soon, and of course he will have to face many dangers and many monstrous creatures along the way.

El Kerim has one huge advantage. He cannot be killed because his heart is not in his chest, it is safely locked up in a tower guarded by all manner of hideous monsters. Which is a pretty cool concept. 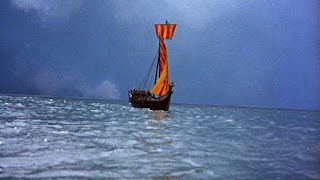 Guy Endore’s script provides plenty of scope for heroics. Director Byron Haskin was something of a specialist in this type of film and he knows what he’s doing. He certainly knows how to keep things moving which is of course the key to success when you don’t have a gigantic budget to work with.

The special effects were not done by Ray Harryhausen and they’re not up to his standards but they’re still fairly good. There are some imaginative monsters. There’s also a weird spider dance which I rather liked.

The movie was shot in Technicolor and has a bright comic-book look to it. The sets and the costumes are extravagant enough given that this was not a big-budget blockbuster. 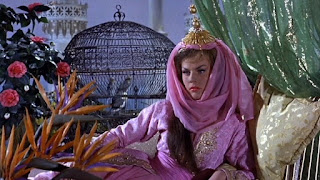 The cast members understand precisely what is expected of them and they ham it up accordingly. Guy Williams (already well known for the Zorro television series and soon to be much better known for Lost in Space) makes a fine hero and being of Italian extraction he has the right kind of Mediterranean good looks for the rôle. Hedi Bruhl is charming and attractive as Jana.

Pedro Armendáriz steals the movie with his outrageous performance as El Kerim but he has some stiff competition from Abraham Sofaer as Galgo. The performances are all delightfully silly and they all work. 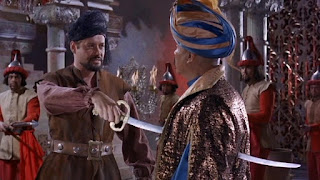 The Warner Archive DVD release offers a very good anamorphic transfer with dazzling colour. There are no extras.

Captain Sindbad is not one of the great adventure movies but it has charm and a sense of fun. It never makes the mistake of taking itself the least bit seriously. It’s cheesy, but in a good way. It’s a popcorn movie. If you can still get in touch with your inner ten-year-old you’ll enjoy it. I did. Recommended.
Posted by dfordoom at 12:41 AM