A Life at Stake is an oddity. It’s kind of a film noir, but it isn’t. The most curious thing about it is the casting of Angela Lansbury as the femme fatale. Yes, Angela Lansbury.

Edward Shaw (Keith Andes) is an architect-builder whose business has gone down the tubes after his partner gambled away all the firm’s money, leaving Shaw extremely bitter. Now he has received an offer that will allow him to get his business back on its feet again. It’s an offer he can’t refuse, but maybe he should have refused it anyway.

The offer, of half a million bucks, comes from a Mrs Hillman although actually it’s her husband putting up the money. Doris Hillman (Angela Lansbury) is a bored housewife and
Shaw suspects that she may be more interested in playing around on the side with him than in the business venture. He could be right.
He has soon has cause to be suspicious about other things as well. Like the fact that the Hillmans want him to take out a huge insurance policy on his life. That makes Shaw suspicious that they might be planning to bump him off. Which sounds silly but it’s already been established that Shaw is a guy who is suspicious of everybody. 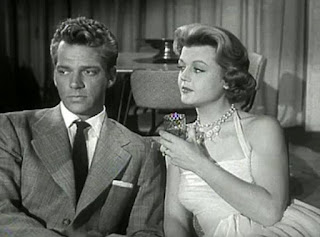 There are a number of things that tend to conform Shaw’s suspicions, including things that Doris’s kid sister Madge tell him. The cops don’t believe him when he tells them that the Hillmans are planning to murder him but his paranoia keeps on growing. He’s in love with Doris, but he’s also in love with Madge. It makes it hard for him to think straight. The brake failure that nearly kills him makes him more paranoid but then he’s also rather accident-prone. He’s so jumpy and distracted that he walks out in front of cars. So maybe it is just paranoia.

He and Madge cook up a scheme to find out the truth but it’s a pretty reckless plan wth lots of potential to backfire. 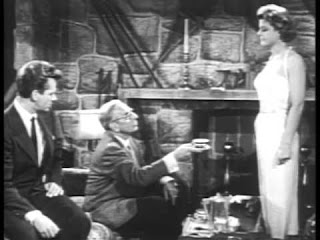 Hank McCune produced the movie from his own story idea (with Russ Bender writing the screenplay) and while there are no great surprises it’s quite a decent paranoia/suspense story. Director Paul Guilfoyle mostly worked in television. This movie probably needed a director with a bit more style and energy to bring out the suspense elements more effectively. 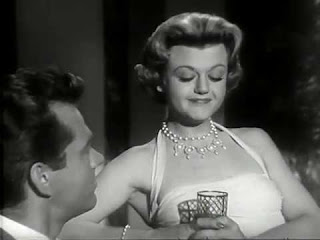 There is some amusing hardboiled dialogue.

Umbrella have released this one on DVD in Region 4. It’s not a spectacular transfer but it’s acceptable.

A Life at Stake is not a complete success but it’s interesting to see Angela Lansbury cast against type and managing to be an OK femme fatale. It’s a B-movie oddity that is enjoyable enough if you’re in the mood. It certainly does the paranoia thing very effectively. Don’t set your expectations too high but it’s worth a rental.
Posted by dfordoom at 2:17 PM