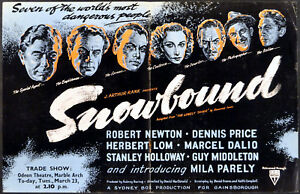 Snowbound is a 1948 British thriller based on the bestselling novel The Lonely Skier by Hammond Innes.

Blair (Dennis Price) is working as an extra at a British film studio when the film’s director, Engles (Robert Newton), recognises him and offers him a better job. Engles had been Blair’s commanding officer during the war. Engles later worked in Intelligence.

The job is simple. Blair, accompanied by cameraman Wesson (Stanley Holloway), will stay for a few months at a ski lodge in the Alps. All Blair has to do is report back to Engles on everything that goes on at the lodge, and in particular he has to look out for a young woman named Carla (although she’s probably calling herself something else now). 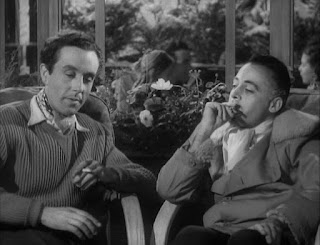 This ski lodge was, curiously enough, the spot at which a certain notorious Gestapo officer met his end a few years earlier.

Blair will be posing as a scriptwriter, doing research for a possible movie. Blair has no idea what this job he’s been given is all about but he’s the sort of man who automatically assumes that if his former CO is involved it can’t be anything shady. Besides, he needs the money and it sounds like fun.

There are plenty of potentially suspicious characters staying at the ski hut. There’s a voluble Italian, Valdini. There’s an Englishman named Mayne, who seems very suspicious of Valdini. And there’s a Greek named Keramikos (Herbert Lom) who makes a rather memorable entrance. 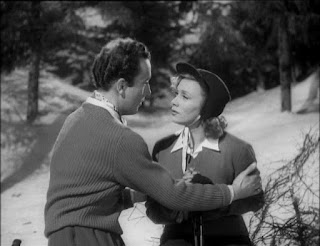 Carla is there as well, calling herself the Contessa Forelli. She takes something of an interest in Blair although whether it’s a sincere romantic interest or whether she’s just using him remains to be seen. She’s the sort of woman who might or might not turn out to be a femme fatale.

These are all people who seem very much out of place in a rather spartan ski hut, especially when there’s a very comfortable hotel at which they could be staying. They obviously have a reason for being there, and given that they seem like a somewhat disreputable group of people (all of whom seem to have something to hide) that reason is likely to be money. A great deal of money. It seems a fair bet that the ski hut contains the key to finding something very valuable.

It becomes clear to Blair that the game that is being played is a serious one when one of the group tries to kill him, out on the mountain. 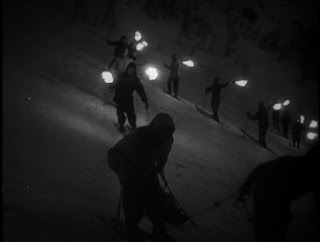 The details of the secret are revealed in a series of flashbacks and given the nature of the story flashbacks were unavoidable. The tale builds to a pretty satisfying conclusion.

The very strong cast helps. Dennis Price is a favourite of mine and he’s very good as the amiable Blair. Herbert Lom is another favourite and he gets to do some serious scenery-chewing.

The movie starts a bit slowly but once it his its stride director David MacDonald keeps the tension and the mystery going. MacDonald’s career wasn’t spectacular but he did direct the rather good swashbuckler The Moonraker a few years later. 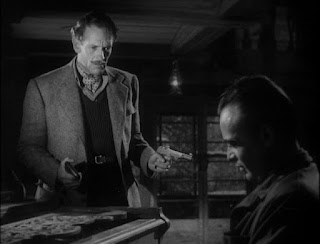 Hammond Innes is one of those writers who enjoyed immense popularity during his lifetime only to be more or less forgotten after his death. I’ve only read one of his novels, The Blue Ice, but it’s excellent.

Snowbound is included in one of Kino Lorber’s British Noir boxed sets although its claims to being film noir are very slender indeed. It’s just a straightforward thriller.

Don’t worry about the warning regarding the quality of the transfer (the original negative of the film has long since disappeared). There’s some insignificant print damage but overall the transfer is actually very good. There are no extras.

Snowbound isn’t terribly ambitious. It just aims to be a solid entertaining thriller and for the most part it succeeds. Recommended.