Death Goes to School is an obviously very low-budget 1953 British mystery (made by Independent Artists and shot at Merton Park Studios) about a murder at an exclusive girls’s school. The victim is one of the teachers, Miss Cooper.

The police have reason to believe that the murder must have been committed by a member of the staff. Since there are only seven staff members, the headmistress and six teachers (all women), and one of the teachers is now dead that limits the number of suspects.

Inspector Campbell of Scotland Yard (Gordon Jackson) believes that in such an environment there will be plenty of motives for murder. And he’s right.

Every member of the staff had reason to dislike Miss Coper, and to dislike her intensely. She clearly had an abrasive personality and a knack for treading on people’s toes and humiliating them. Not one of the teachers has what you could call a solid alibi and Inspector Campbell is certain that every one of them has lied to him.

The most promising clues are a footprint and a scarf found at the scene of the crime. The scarf was the murder weapon (Miss Cooper was strangled) while the footprint is pretty obviously the murderer’s. 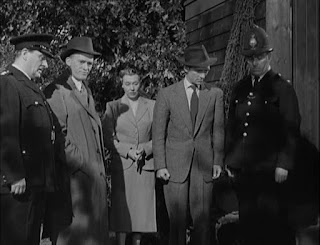 While the fact that all the suspects have told at least one lie under questioning makes things difficult for the Inspector there is plenty of gossip to provide him with useful information.

To add to his difficulties one of the other teachers then disappears.

There are lots of flashbacks as the various suspects reveal their reasons for hating Miss Cooper. There’s also a voiceover narration by one of the teachers who decides to try her hand at being an amateur detective. So we have the classic setup of a professional and an amateur detective both coöperating and competing to solve the crime. She’s intelligent and he’s a good solid detective so we’re not sure which of them will find the answer first. 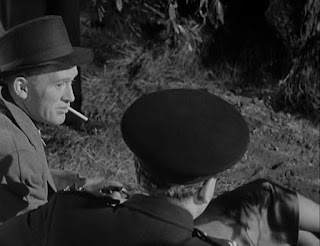 This movie has a few problems. It is a bit talky and a bit stagey (probably mainly due to the low budget which meant very few sets). The plot isn’t dazzling and the script isn’t exactly sparkling. I’m not much of a fan of voiceover narration and this movie would have worked better without it.

The most interesting thing about the film is the hothouse atmosphere of the school staff room and the all-female environment in which the murder occurs, and the fact that as a result the motive is likely to be a characteristically female motive. Which it turns out to be.

There are several elements that would have caused problems with the Production Code in an American movie of this period, especially the ending and also the very subtle hint of a lesbian infatuation. 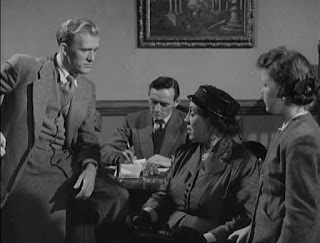 This was Stephen Clarkson’s only feature film as a director. With a running time of just 64 minutes he has to keep the plot moving along, which he does, even if he doesn’t display much inspiration. Clarkson co-wrote the screenplay with Maisie Sharman, who wrote the novel on which it is based.

Gordon Jackson (who of course went on to have a very successful television career) gets one of his few feature film lead rôles. Barbara Murray shares top billing as one of the teachers, Miss Shepherd. There’s no hint of romance between the Inspector and Miss Shepherd but there is a certain affectionate regard that springs up between them which works quite well. 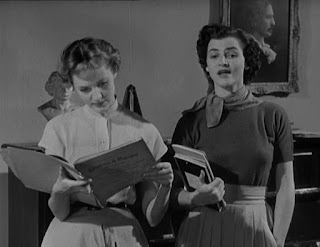 Sam Kydd (for some reason uncredited) is quite good as Campbell’s rather cheerful sergeant.

The good news is that this obscure movie is readily available on DVD since it’s one of the films in the Renown Pictures Crime Collection Volume 1 boxed set (a value-for-money set which includes nine feature films plus a short (31-minute) film. The transfer is quite good.

Death Goes to School is a routine mystery but the hothouse atmosphere and all-female roster of suspects adds a bit of interest. If you don’t set your expectations too high it’s worth a look.
Posted by dfordoom at 9:59 PM