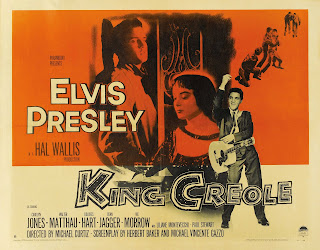 King Creole is a 1958 Elvis Presley musical drama. The movie was a major box-office hit and was well received by critics. Like several of his early films this one gives Presley a chance to prove himself as an actor and it was his favourite film rôle.

The movie was based on a 1952 book by Harold Robbins.

It opens in New Orleans. Danny Fisher (Presley) is about to graduate from high school. He lives with his sister and his father. His father (played by Dean Jagger) has fallen on hard times. He just gave up on life when his wife died. Danny loves his father but he despises him as well. Danny hates to see a man crawl and his father has spent his whole life crawling. Danny has to work before school and after school. At his job sweeping floors in a bar he encounters a girl named Ronnie (Carolyn Jones) who’s with a bunch of rich drunks. He rescues her but he’s late for school and when he gets to school he gets into a fight which means he won’t graduate. 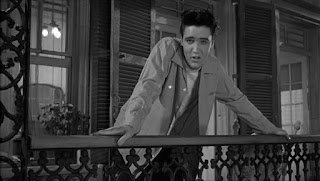 Danny is basically a decent kid but he’s a little embittered by a life that seems to be going nowhere fast and he’s getting fed up. He gets in with a juvenile delinquent gang led by Shark (played by Vic Morrow who specialised in such rôles although by this time he was ridiculously old to be a juvenile delinquent).

Danny also has a run-in with a big-time hoodlum named Maxie Fields (Walter Matthau). Ronnie is Maxie’s girl and Maxie gets real jealous.

Danny gets forced to sing one night and it turns out he’s a great singer, which attracts the attention of honest club-owner Charlie LeGrand (Paul Stewart) and Maxie. Danny’s singing career starts to take off at Charlie’s King Creole club but his problem is Maxie - Maxie doesn’t like the idea of there being anything good in the world unless he owns it. Maxie intends to own Danny Fisher. And Danny does not intend to be owned. 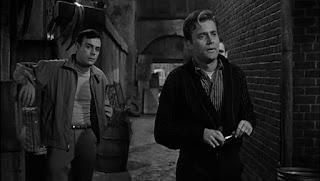 So Danny, who really doesn’t mean any harm to anyone, seems to be drifting inexorably towards big trouble. He just makes a few mistakes but when you’re dealing with a guy like Maxie one mistake is all it takes. Once he gets his claws into you he doesn’t let go, which is something that both Danny and Ronnie find out the hard way.

Danny has major woman problems, or rather the problem is that he’s caught between two women. Nellie (Dolores Hart) is a sweet kid but she wants marriage and babies. But there’s Ronnie as well. He’s not sure what Ronnie wants and maybe Ronnie isn’t sure either. But Ronnie is likely to get him into big trouble with Maxie. 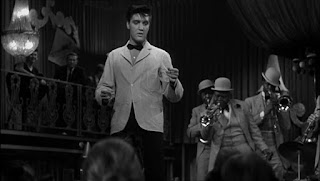 Elvis was a competent actor but as his movie career progressed he was given fewer and fewer chances to show his skills. In this movie however he has to do real acting and he handles the challenge pretty well. He'd shown real promise as an actor in Jailhouse Rock and he's even better in this movie. Naturally he gets to sing as well, and naturally his singing is terrific (and he gets some very good songs).

Walter Matthau as Maxie surprisingly makes a reasonably effective slimy villain. The whole supporting cast is pretty good. Dolores Hart’s problem is the problem that most of Evlis’s leading ladies had - Elvis just had so much charisma that (apart from Ann-Margret in Viva Las Vegas) that they tended to get completely overshadowed. Carolyn Jones is a better match for Elvis in that respect. In fact she’s excellent. She’s not quite a femme fatale but she’s about as close as you’ll get to one in an Elvis Presley movie. 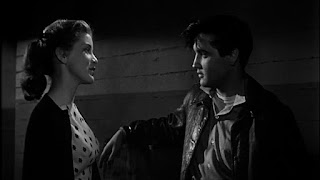 King Creole was directed by Michael Curtiz. Curtiz managed to make good movies in just about every genre going. Curtiz was maybe an artisan rather than an artist but he was an extraordinary skilled artisan.

King Creole looks great in an anamorphic widescreen transfer on DVD. The film was shot in black-and-white (which for some reason really seems to work for films set in New Orleans).

This is a musical but it’s not a frothy musical by any means. It’s quite hard-edged and almost qualifies as a noir musical. Maybe you could call it a noir musical melodrama. It is definitely melodrama but that’s OK because I like melodrama. Whatever you call it it’s an excellent movie with Presley in good form in both the singing and acting departments. Highly recommended.
Posted by dfordoom at 3:06 AM