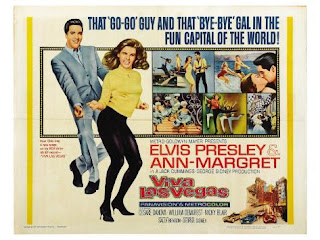 Viva Las Vegas is a pretty lightweight movie. Which is OK. It’s an Elvis Presley movie so you’e not going to be expecting Citizen Kane. The important thing is that it’s a great deal of fun. And unlike some of Elvis’s movies, it’s well-made stylish fun.

The plot is thin, and that’s putting it mildly. Lucky Jackson (Elvis) is an up-and-coming race-car river who heads off to Las Vegas to win enough money to buy a new engine for his race car so he can enter the Las Vegas Grand Prix. He wins the money at the gaming tables, and loses it in bizarre circumstances (well maybe not so bizarre since he was pursuing a young lady at the time). Now he’s forced to work as a waiter but the upside is that he’s met Rusty Martin (Ann-Margret) and he’s pretty sure that she’s the girl he’s been looking for all his life.

He has a rival both romantically and on the race-track, a suave Italian count Elmo Mancini (Cesare Danova). The count is actually a pretty nice guy but you might think twice about  trusting him with your car or your girl.

Rusty falls for Lucky just as hard as he falls for her but there’s a snag. She’s worried about his driving. She doesn’t want to be the widow of a race-car driver. Lucky is equally determined not to give up his dream of success on the race-track.

Lucky’s immediate problem is how to find the money for that engine he needs but at the same time he’s not going to give up on Rusty. That’s pretty much it for the plot, and for the type of movie this is it’s perfectly adequate. There’s the right mix of humour and romance. The humour isn’t overdone. The temptation to resort to overly broad comedy or slapstick is resisted, and quite rightly.

However slight it might be plot-wise and thematically this movie has several very big things in its favour. Firstly there’s Elvis. It’s not a demanding rôle (he was a decent actor and could handle more ambitious parts) and mostly what he has to do is to be charming, likeable, sexy and charismatic. All of which he manages with ease.

Secondly there’s Ann-Margret. She’s the perfect leading lady for him. She can match him charisma for charisma and star quality for star quality and she seems like exactly the sort of gal that a character played by Elvis would fall in love with. She gets to do several songs including a showstopper Las Vegas-style big production number. Her acting is more than adequate, she makes Rusty feisty but cute and she looks stunning. And she gets a memorable entrance that lets us know we’re in the presence of a star.

Thirdly there’s the fact that MGM spent some serious money here and they hired some very competent people. Screenwriter Sally Benson had written Shadow of a Doubt for Hitchcock and she wrote the screenplay for Anna and the King of Siam. Director George Sidney had helmed a string of classic musicals such as Anchors Aweigh, The Harvey Girls, Annie Get Your Gun, Show Boat. Viva Las Vegas is a slick, polished well-crafted musical and Elvis’s performance of the title tune in the talent contest is a highlight.

And lastly there’s the other major star of the movie - Las Vegas itself. There’s quite a bit of location shooting, in places like the Flamingo Hotel and the car race through the city. This was the old Vegas - brash, vulgar and pulsating with life and excitement.

This is also a very good-natured movie. There’s no villain. Count Elmo will try his darnedest to win Rusty but he won’t cheat to do it and he won’t cheat to win the Grand Prix either. He’s a sportsman. His rivalry with Lucky is a friendly rivalry.

Then there are the songs and on the whole they’re pretty good.

The Deluxe Edition DVD offers a very good 16:9 enhanced transfer, an audio commentary and an excellent documentary on Elvis in Vegas.