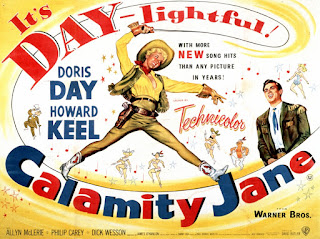 Having become quite a fan of Doris Day in other movie genres I thought it was about time for me to bite the bullet and attempt one of her musicals. Calamity Jane, made at Warner Brothers in 1953, seemed like as good a place as any to start.

Calamity Jane was an actual historical figure but don’t panic - this movie is not going to bother with anything as tiresome as historical accuracy. And in any case it appears that the real Calamity Jane was not exactly a sticker for accuracy when it came to recounting her adventures. 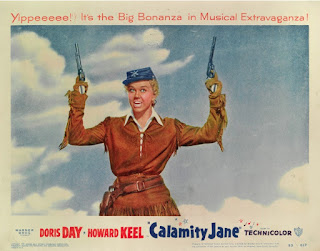 As the movie opens Calamity is saving a stage coach under attack from a Sioux war party. The stage coach is on its way to Deadwood in the Dakota Territory. Calamity’s account of the attack is embellished a little in the telling but it seems that the people of Deadwood are used to this. Wild Bill Hickok is particularly sceptical, which doesn’t prevent him from being a close and devoted friend to Calamity.

There is trouble brewing in Deadwood. The manager of the town’s only theatre has announced, with much ballyhoo, that he was importing a famous (and glamorous) actress from New York City. Unfortunately there was some confusion on the subject of gender and the actress who arrives is in fact an actor. The townsfolk (almost all of them men and exceptionally starved of female company) are most displeased and are about to trash the theatre when Calamity steps in. She will go to Chicago and bring back a real actress, a major star, the famous Adelaid Adams. 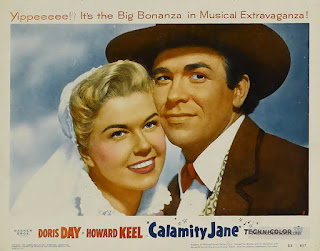 Calamity is not the most feminine of women and she’s a bit of a rough diamond. And her knowledge of the theatre is non-existent. She mistakes the great actress’s maid for the actress herself. The maid, Katie Brown, has always nourished the dream of a career on the stage and now sees her opportunity. She neglects to tell Calamity that she isn’t the great star.

As you might expect, her theatrical debut in Deadwood is somewhat eventful. The audience is initially pleased, Katie being an actual female and a fairly attractive one. When she tries to sing in the style of Adelaid Adams it becomes evident that she is an impostor. Once again Calamity comes to the rescue and when Kate is persuaded to simply be herself she becomes a surprise hit.

Katie and Calamity set up housekeeping together but there are complications. Both women are madly in love with a handsome young lieutenant. Of course you know that somehow or other true love is going to triumph.

Allyn McLerie, an actress I’d never heard of, is extremely good as Katie. Howard Keel is Wild Bill Hickok, and I’m afraid I’m not a fan of either his singing or his acting. 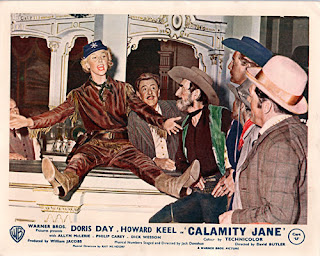 Doris Day on the other hand is a delight. She’s funny, she’s feisty, she’s convincingly butch  as the tomboy Calamity.

The movie has a very very artificial feel to it, which I like. It looks like it was filmed entirely on a sound stage and that gives it a very appealing unreal feeling. You don’t want anything as tedious as realism in a musical. It’s amusing, the sings are a bit uneven but they have their moments, it’s outrageously romantic and it’s just generally fun.

I wouldn’t go so far as to say that I’m a convert to 50s Hollywood musicals but I’ve now come across a couple that I’ve liked a good deal. Calamity Jane is recommended.
Posted by dfordoom at 3:13 PM