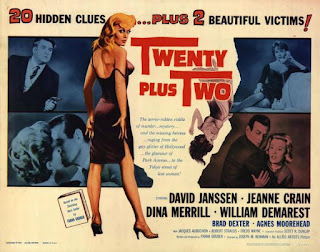 Twenty Plus Two (AKA It Started in Tokyo) is a 1961 American private eye movie. It’s more in the straightforward mystery rather than the hard-boiled mould but there are some definite hints of film noir.

David Janssen stars. He was already a fairy well-known star on television thanks to the Richard Diamond Private Detective series. In Twenty Plus Two he’s Tom Alder, a private detective of a very specialised type. He finds people. That doesn't mean he takes ordinary missing persons cases. He finds missing heirs. If someone dies leaving a large estate and there are no known heirs he goes looking for heirs who may have been overlooked. Distant forgotten relatives. He then gets a percentage of the estate. It’s a good arrangement. These people have no idea that they are in line for inheritances from relatives of whose existence they may only have been dimly aware so they’re more than happy to pay him a generous percentage. He’s happy because he makes a very comfortable living indeed for doing a job for which he was a peculiar talent - for him it’s easy work. 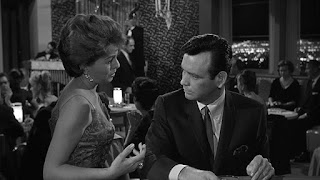 Alder would not normally have any interest in the murder of Julia Joliet, a middle-aged woman who makes a living running a fan club for Hollywood star Leroy Dane, but some newspaper clippings relating to the Delaney case were found in Miss Joliet’s apartment. Twelve years earlier sixteen-year-old schoolgirl Doris Delaney disappeared. Her parents were very wealthy and influential people and the case attracted a lot of attention, and it remained a fascinating unsolved mystery. The Delaneys spent a fortune on private detectives to find their vanished daughter. If neither the police nor an army of private eyes could find Doris Delaney you might think that one man picking up such a cold trail twelve years later would have no chance. But Tom Alder is very very good at finding people. And he may have found a link that no-one else had spotted.

Alder is also finding that the past is hard to escape. He has run into Linda again. Linda Foster (Jeanne Crain) was his first love. Ten years ago she dumped him. It hurt. It hurt a lot. He had learnt to handle it but now she’s back and she wants him back and he has a feeling that he may be once again heading for a whole world of hurt. 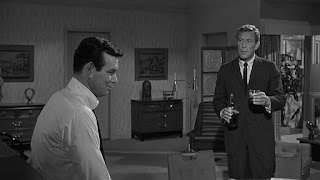 There are numerous plot strands that don’t seem to be connected but of course they are connected and they’re resolved pretty well. While the plot is not really all that dazzling there are some very interesting and unusual elements to this film. The hero is most emphatically not an action hero. He doesn’t carry a gun (he’s not really a PI as such) and he doesn’t get into any fistfights. More unusually he doesn’t get beaten up. He doesn’t even threaten anyone. There’s only one scene with a gun and he’s not the one holding it. In fact he doesn’t do a single heroic thing. It’s not that he’s a wimp. He’s just not a tough guy hero. He’s an investigator and what he does is investigate.

Also unusual is the fact that he doesn’t go around interviewing witnesses and trying to pump people for information. He uses other people (real private detectives and contacts he has in useful places) to gather information. His talent is for putting the pieces of the jigsaw together, not for collecting the pieces. He just happens to be very good at putting those pieces together. He sees connections that others don’t see (such as a very minor but very significant difference between two photographs of the same person). Mostly Alder makes phone calls, patiently utilising his courses to assemble his clues (and the audience gets the same clues that Alder gets). 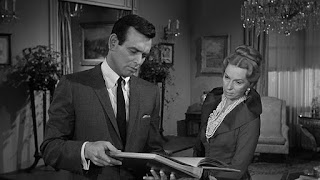 This is 1961, very much a transitional period in American movies. The Production Code was crumbling. This film deals much more openly with sexual subject matter than would have been the case even a couple of years earlier but it does so without ever getting sleazy or exploitative. It’s sex that drives the plot but sex is never used for titillation. There’s a flashback sequence in Tokyo in 1951 in which the young Alder meets a woman named Lilly in a bar. She’s obviously a whore but again the situation is handled subtly and without sensationalism.

Frank Gruber wrote and produced the film from his own novel. Joseph M. Newman directed, and quite effectively in a very low-key manner. 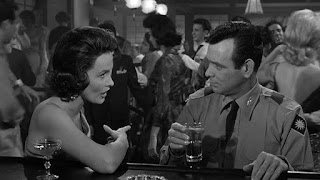 Janssen plays Alder with a certain quiet charm with perhaps just a touch of neuroticism lurking beneath the surface. It’s a fine performance. Jeanne Crain seems destined to be the femme fatale and she does it well. But then there’s Nicki (Dina Merrill) and she might turn out to be the femme fatale. And there’s also Lilly and she could qualify as well. One of the many interesting things about this movie is that the story arcs of the characters don’t develop as you expect they’re going to. Agnes Moorehead is in splendid form as the proud and rather shrewd mother of the long-lost schoolgirl.

Overall Twenty Plus Two is a low-key slightly offbeat slightly noirish mystery and it’s really quite appealing. I highly recommend this one.
Posted by dfordoom at 6:37 PM