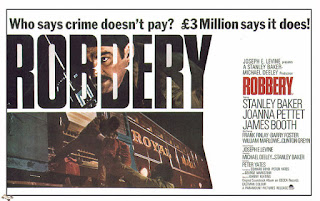 Robbery is a 1967 British crime thriller directed by Peter Yates and based on the Great Train Robbery of 1963. Steve McQueen saw this film and was so impressed, especially by the car chase, he hired Yates to direct his next film. That film would be Bullitt.

Robbery was produced by Stanley Baker who is also the star. In 1967 Baker was one of the most significant figures in the British film industry. He was a huge star in Britain and after Zulu in 1964 he was a pretty big star internationally. Baker wanted to be more than just a star and he was already establishing himself as a major force behind the scenes. Baker was the first major British film star to be unequivocally and unapologetically working class and as such he not only helped to change the whole character of he industry in Britain, he also paved the way for a new wave of working class stars like Sean Connery and Michael Caine. 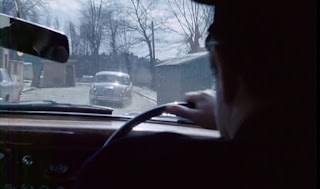 Robbery starts in the middle of what is obviously a heist but we don’t really know what’s going on. It’s a meticulously planned and timed operation, the sort of robbery that could only have been planned by someone who believes in obsessive attention to detail. It culminates in a car chase but it’s not until the heist is over that we discover it was a diamond robbery. But this movie is not about that diamond robbery. The diamond job was  merely a way of raising capital for a much bigger much more ambitious job. In fact the biggest robbery ever carried out in Britain up to that time.

The diamond robbery went without a hitch. Well, almost. There was one tiny mistake which lands one of the gang in prison. Not so much a mistake, more a case of one of those little things that goes wrong that cannot possibly be anticipated. This sets the tone for the rest of the movie. The mastermind behind the robberies is Paul Clifton (Stanley Baker). He plans his crimes like military operations. Every single detail is planned and rehearsed and then rehearsed again. 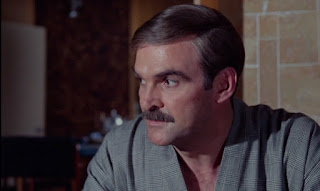 This is very much one of those heist movies in which the emphasis is on the buildup and then on the detailed unfolding of a complex plan. That’s not to say that it’s lacking in action, but the action is always balanced by slower scenes in which the tension builds remorselessly. Clifton’s robberies are so well planned that nothing can go wrong but of course we know that something will go wrong, we just don’t know what it is that is going to bring disaster, and we don’t know how bad the disaster will be since Clifton is the sort of guy who believes in having a contingency plan for everything. He doesn’t have a driver for every vehicle, he has two.

This movie also represents something of a major departure for heist movies in its emphasis on realism. The criminals behave like real criminals. The cops behave like real cops. The police investigation is obsessively realistic police procedural stuff. The cop leading the investigation, Detective Inspector George Langdon, might not be a man of brilliant insights but he overlooks nothing. 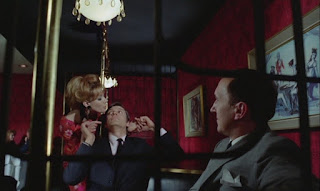 Even the car chase is grittily realistic. We really believe we’re watching a real police pursuit through real streets. It’s exciting but unglamorous - the excitement comes from the sense of realism.

The focus is on the nuts and bolts of both crime and police work. The characters are cogs in a machine, with no real personality. We have no idea what motivates Paul Clifton. He’s a criminal because that’s what he does for a living. He wouldn’t know how to do anything else. Inspector Langdon is a cop because he wouldn’t know how to do anything else. The one exception is Clifton’s wife Kate (Joanna Pettet), torn between her obviously genuine love for Clifton and her weariness of life as the wife of a career criminal. She is tired of waiting for him to get out of prison, tired of being a wife cut off from love (and very obviously tired of years without sex).

Yates was a fairly inexperienced director but the similarities in tone and approach between this film and Bullitt are so strong that he was clearly already starting to find his style. Having Douglas Slocombe, one of the greatest of all British cinematographers, on board would certainly have helped. Robbery has an overwhelming grinding sense of emptiness and futility. These are criminals who know they’ll eventually be caught, if not for this crime then for the next one. Their lives are interludes between prison terms. Escaping from the cycle is something that just doesn’t occur to them. 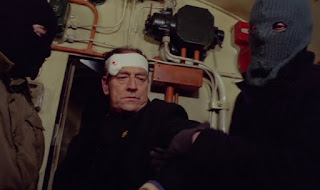 This is clearly a movie that had serious money spent on it, not surprising given Stanley Baker’s box office clout at the time.

The DVD from Kino Lorber offers a very nice anamorphic transfer. The main extra is an audio commentary that is unfortunately very disappointing, focussing mainly on trivial details that we could easily look up for ourselves.

It’s interesting to compare this movie with the excellent 1969 British TV series The Gold Robbers, also dealing with an intricately planned heist that slowly unravels due to the accumulation of small unanticipated factors that didn’t seem to be mistakes at the time but turn out to be fatal errors.