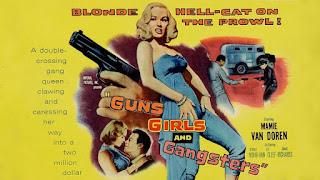 Chuck Wheeler (Gerald Mohr) has just been released from San Quentin and he has big plans - to rob an armoured car carrying the take from Las Vegas casinos to LA. The haul should be at least two million dollars (an astronomical amount of money in 1959). The only thing is, he needs Joe Darren (Grant Richards) because Darren is the one guy who knows how to launder the money. To get to Darren he intends to use his old cellmate Mike Bennett’s wife Vi Victor (Mamie van Doren). Vi is a canary working at one of Darren’s night clubs and Daren’s been making time with her. As well as the two million Chuck intends to get Vi as well. Considering that her husband Mike (Lee van Cleff) is insanely jealous and psychotically violent and is being released in three months’ crime any man thinking of putting the moves on Vi seriously needs his head examined. But of course the whole point of the movie is that any man who sets eyes on Vi is not exactly going to be thinking sensible thoughts. 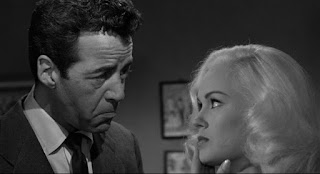 Chuck’s plan is a good one but Chuck is thinking more about Vi than anything else. His judgment is not as sound as it might be (I must say I can’t blame him).

The plan might have worked except that Mike has found out that his wife has been sleeping around while he was inside so he busts out and proceeds to create havoc for everybody, leaving an ever-lengthening trail of corpses behind him. Vi makes every man crazy but crazy doesn’t even begin to describe what she does to Mike.

The movie relies a lot on voiceover narration which is usually a bad idea but there’s a lot of plot to be packed into the 70-minute running time so it’s perhaps excusable. And it’s important to get the background to the crime sketched in as quickly as possible so we can get to what’s really important - Mamie van Doren. That’s what the audience for this film wants to see, and there has to be time to let her do a couple of musical numbers so we can see just how sexy she is. And she’s plenty sexy. 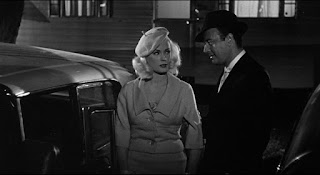 Vi is hardboiled and not very moral but she’s also rather sentimental. There’s a sweet kid underneath the bad girl exterior. Life hasn’t offered her much and she’s had to take what she can get, which she’s done without hesitation, but while she’s unscrupulous she’s not in the least evil. Miss van Doren does a pretty reasonable job here. She makes Vi believable and she makes her interesting.

As a singer and dancer she wouldn’t set the world on fire (although she’s OK) if it wasn’t for that body, but she has that body and she’s read the instruction manual that came with it. Her night club performances are what you’d expect in the old Vegas of the late 50s. This was the Vegas of the Rat Pack and the movie captures the atmosphere of money and seedy glamour. 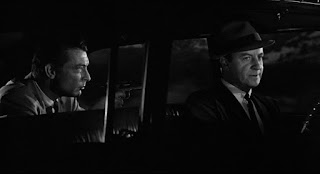 Cult movie fans will naturally be waiting to see Lee van Cleef make his entrance. He doesn’t disappoint. He’s bad and mad and dangerous and he’s totally out of control. He’s a killing machine. Gerald Mohr is pretty good too as Chuck. Chuck is a bit like Vi. His problem is that he’s not quite as bad as he thinks he is.

The heist scenes are done fairly well. This was a pretty low budget film but while it might lack sophistication director Edward L. Cahn keeps things moving along at a cracking pace. It’s also moderately violent by 1959 standards. Of course there’s no gore or anything remotely approaching it but there are a couple of killings that are chilling in their cold-bloodedness. This is a movie that tries to be hardboiled and mostly it succeeds. 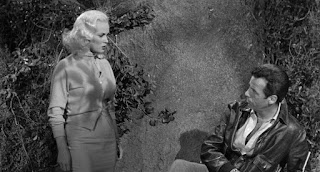 The anamorphic transfer is very good. There are no extras. The movie is in black-and-white and looks all the better for it.

This is a B-movie and it makes no apologies for this. It glories in it. It’s a celebration of tackiness and trash culture. It wants to be lurid, and it is.

This would be an entertaining little B-movie even without Mamie van Doren. With her it’s loads of fun. And she sure does fill a dress very nicely.

Guns, Girls and Gangsters is highly recommended.
Posted by dfordoom at 12:25 AM