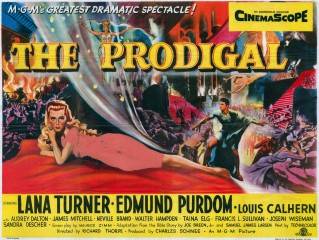 In 1955 the Hollywood studios were in big trouble. Television was slowly strangling them. They tried a number of gimmicks to tempt audiences back to theatres. Things like Cinemascope and 3D enjoyed some success but the studios placed much of their faith in big-budget blockbusters. Preferably costume epics. Shot, of course, in colour and Cinemascope. Some of these epics were box office bonanzas and won acclaim from critics. Some were popular with the public but disdained by the critics. And some won acclaim from neither the public nor the critics. Some films in the latter category did go on to become cult favourites for their considerable camp value.

Which brings us to MGM’s 1955 offering The Prodigal. It was a dismal failure at the box office and was regarded with contempt by critics. It hasn’t quite made it to cult favourite status but it has potential in that area - there’s certainly plenty of camp value, the premise is absurd, the script misfires badly, the acting is generally terrible. On the other hand it looks spectacular. It’s not so much high camp as high kitsch but visually it will get your attention.

And it has Lana Turner in full-on bad girl sex goddess mode, for a while at least.

It is, very very loosely, based on the biblical parable of the prodigal son. Micah (Edmund Purdom) is the younger son of the venerable and very pious Eli. Eli lives in a small sea port which is a stronghold of the strictly monotheistic followers of Jehovah. The rest of the country is dominated by polytheists worshipping a bewildering array of gods but the most significant of the pagan cults is that of the goddess Astarte. To say that the followers of Jehovah and the followers of Astarte do not get along would be a masterpiece of understatement.

Micah is to be betrothed to Ruth, the eminently respectable daughter of a neighbour. Ruth is sweet and pretty, she comes from a good family, she is pious and she is determined to be a good wife. She even assures Micah that she can cook. Since Ruth and Micah actually like each other it seems destined to be a successful marriage and Micah has every intention of making a go of it. Unfortunately the day before the betrothal Micah sets eyes on Samarra (Lana Turner). And all Micah’s good intentions go out the window. Samarra oozes sex from every pore. She is not a nice girl and she is most certainly not respectable. Whether she can cook or not we never find out but we’re pretty sure it’s not her skills in the kitchen that interest Micah.

Samarra is the high priestess of Astarte. Like all the priestesses of Astarte she is a temple prostitute. To the followers of Astarte it’s a religious ritual and they consider it to be perfectly normal but the fact remains that her religious duties involve selling her sexual favours for money. She might not be a common woman of the streets but she is certainly technically a prostitute. Surprisingly enough the movie is very explicit about this. There’s no hedging about, no nonsense about her being a dancing girl or anything like that. She is, not to put too fine a point on it, a whore. I have no idea how MGM got away with this in 1955.

In fact the movie goes even further than this. Temple prostitution is at least a religious obligation but in one early scene the high priest is negotiating a very large loan from a money-lender and throws in Samarra’s sexual favours to sweeten the deal (which doesn’t seem to bother Samarra in the least). So Samarra is apparently quite willing to sell her sexual services in any circumstance in which it might be advantageous to do so.

I’m also not sure how they got away with having a character like Yasmin. She’s a ten-year-old girl in training to be the next high priestess and given what we know about the high priestess’s duties that might be considered slightly disturbing.

There are several sub-plots, one involving a scheme by the high priest to enrich himself by starving the people. From time to time the film cuts back to life in Micah’s home town where we’re treated to some boring interludes with his sanctimonious father and brother. Of course the only thing the audience is going to care about is whether Micah can be persuaded to pay the price demanded to gain access to Samarra’s bed and whether Samarra will succeed in corrupting our innocent farm boy.

This movie relies very heavily on the sex and sin angle. In fact it relies on this almost entirely.

There’s plenty of decadence here. There’s the party in Damascus (apparent the Sin Capital of the region) with girls being auctioned off, there’s the card game with a girl as the stake. This is a wicked world in which everything is for sale and the most valuable currency is female flesh. Samarra as high priestess of Astarte clearly has skills beyond compare when it comes to the art of love, or so she assures Micah in order to torture the poor boy. And of course there’s the forecourt of the temple of Astarte, which is plainly and unequivocally a brothel where the temple priestesses/prostitutes service their clients.

The movie’s biggest asset is Lana Turner. I’m not going to try to convince you that Miss Turner was a great actress. She wasn’t. She wasn’t even a very good one. But she was a star. Once she makes her first spectacular appearance she dominates the movie completely. You’re watching her and you don’t care what else is happening. It’s not sexual allures (although she has plenty of that). It’s charisma. It’s old-fashioned star quality. And when she plays a bad girl she’s like a very beautiful very deadly package of pure sex.

Edmund Purdom is pretty awful. The film didn’t need a great actor as male lead but it did need one with the kind of charisma that Miss Turner had. It also needed a male lead who could convincingly attract Samarra’s lust. Someone like Victor Mature would have had great fun with a rôle like this. Turner and Purdom also simply don’t have any chemistry.

Could anything have been done to save this movie? Perhaps. One major problem is the character of Samarra. For the first half of the movie she’s a dangerous and wicked man-eater. Then the screenwriters seemed to lose their nerve. They tried to make her more sympathetic. Maybe she might even be Redeemed By Love. This was a mistake. Firstly, Lana Turner is a lot more fun when she’s being wicked. Secondly, it shifts the focus away from the Micah-Samarra relationship and onto Micah as Hero. And Micah isn’t a very exciting hero. Had they kept Samarra as scheming evil temptress the movie might have maintained its momentum more successfully. The first half, with Samarra as the queen of sex and sin, is fun. The second half drags badly.

There’s also the problem that Micah is not only dull, he’s thoroughly detestable. If you had any sympathy for him I guarantee that the ending will leave you hating him.

Warner Brothers have released this film as an individual DVD and as part of a camp classics set. The transfer is superb and there’s an audio commentary.

This is unquestionably a bad movie but the first half is visually lush thoroughly enjoyable slightly risqué nonsense (and at times very risqué). Lana Turner fans will certainly not want to miss this one. You have to be in the mood for The Prodigal. If you are in that mood it’s recommended.
Posted by dfordoom at 10:00 PM