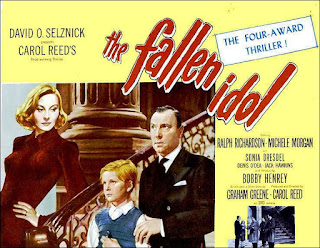 The Fallen Idol, released in 1948, was the first of three very successful collaborations between director Carol Reed and writer Graham Greene. Reed had come up with the idea of doing a film based on Greene’s 1935 short story The Basement Room and asked Greene to write the screenplay.

The story had been set in the past in a large house in Belgravia but in 1948 such houses with a multitude of servants were becoming a thing of the past. Reed decided that an embassy would be the closest modern equivalent so the movie is set in the French Embassy in London. The early stages of the movie follow the short story fairly closely but towards the end it diverges from the short story in a number of very significant ways. 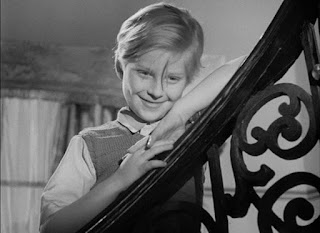 Phillipe (Bobby Henrey)  is a small boy growing up in the embassy. In fact he’s the son of the ambassador. His mother is away and has been for quite some time, recovering from a serious illness. His father is of course too busy to spend much time with Phillipe. The boy doesn’t mind because he has Baines (Ralph Richardson), the embassy’s English butler, whom the lad hero-worships. Phillipe believes every word of the tall stories Baines tells him of his adventures in Africa as a young man. 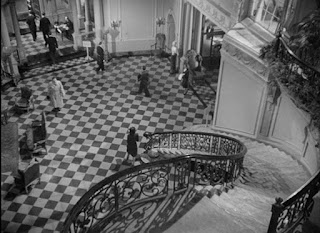 The secrets become important when tragedy strikes. Is it best to tell the truth or to tell lies? Everything Phillipe has seen of life so far suggests that lies are the best policy.

At the point where you think the story has more or less reached its finale it’s actually only just getting into top gear. Now the twists kick in. The lies multiply. There are so many lies that when someone tells the truth it sounds like a lie, and when someone tells a lie it sounds like the truth. Now we’re well and truly in Greeneland, and if you’ve seen the later Graham Greene-Carol Reed collaborations The Third Man and Our Man in Havana you know how cleverly Greene can deal with a world of deception. Once you start telling lies you just have to keep going but there’s quite an art to keeping the lies straight. 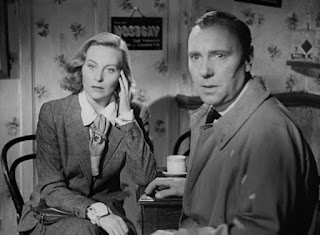 But this film not only has a superb script by Greene it also has the visual brilliance that one expects from Carol Reed. The scene with the boy on the fire escape is a typical Reed tour-de-force. This being a 1940s Carol Reed film you’ll be expecting some Dutch angles and other visual flourishes and he provides them, but with Reed the visual pyrotechnics always serve a purpose. This is a twisted world of deceit. Reed was at the top of his form in the late 40s and Greene was just starting to reach his peak.

What’s really interesting is that the lies are not told by bad people and they’re not really told for malicious purposes. Sometimes they’re told with the best of intentions. But they become a habit. Just as secrets are not necessarily a bad thing but they become a habit too. Lies and secrets can be a kindness, but they can be dangerous. 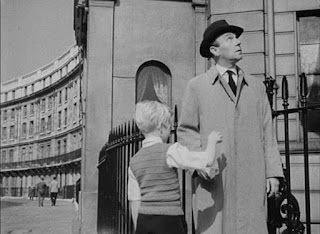 There’s some definite seriousness here but this is not Greeneland at its darkest. There’s some humour and there are even touches of genuine human warmth. One thing you need to bear in mind is that this was an early short story by a writer still learning his craft. When Greene wrote the screenplay for The Fallen Idol thirteen years later he was an established writer just about at the top of his game.

The Studiocanal Region 2 DVD offers a lovely transfer and quite a few extras. There are several other DVD and Blu-Ray releases.

The Fallen Idol is a quirky film. It’s part murder mystery, part suspense film and part psychological drama. Surprisingly perhaps it was a major box office success. This is a truly great movie, one of the classics of British cinema. Very highly recommended.

My review of the original short story can be found here at Vintage Pop Fictions.
Posted by dfordoom at 5:16 PM