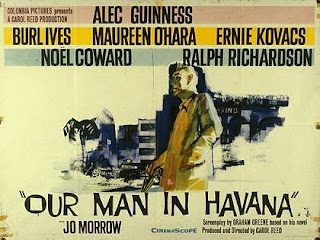 Graham Greene had been appalled by the 1958 film adaptation of his novel The Quiet American. He felt, quite correctly, that it entirely missed the point of his novel. If any more of his books were going to be adapted for the screen he was going to make very sure he did the job himself. So when Carol Reed directed the film version of Our Man in Havana in 1959 Greene wrote the screenplay (he would also write the screenplay for the 1967 film of his later book The Comedians).

Greene has a well-deserved reputation for being dark and pessimistic but Our Man in Havana caught him in a playful mood. It’s certainly a very cynical spy story but it’s wickedly amusing, bitingly satirical and remarkably good-natured. The tone of the movie perfectly reflects that of the book. 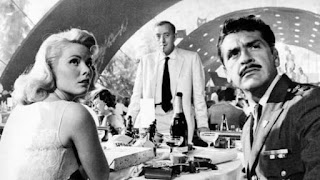 The setting is Cuba just before Castro’s revolution. Mr Wormold (Alec Guinness) sells vacuum cleaners in Havana. He does reasonably well but he has a daughter. Milly is a charming schoolgirl but daughters can be very expensive. And now Milly wants a horse. Mr Wormold knows how expensive horses are. They’re even more expensive than daughters.

So it seems like a stroke of good fortune when he is approached by Hawthorne (Noël Coward). Hawthorne is the Caribbean station chief for the British Secret Intelligence Service (MI6). And MI6 needs a man in Havana. Hawthorne feels that Wormold is ideal spy material. Why he would think this is a mystery although it may have something to do with the fact that Hawthorne is a not a very competent spymaster. Wormold has no interest in being a spy but the $150 a month plus expenses (tax free) that MI6 is offering would buy a lot of horse feed so he accepts the offer. Things are definitely looking up. Mr Wormold is happy. Milly is happy. The horse is happy. 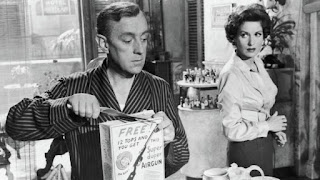 The real trouble starts when London, excited by the extraordinarily valuable intelligence he is supplying, sends him an assistant. So now he has to persuade this assistant, Mrs Severn (Maureen O’Hara), that he really is a spy. Worse follows. Much worse. Someone else, someone from the other side, is also convinced that he is a real and very dangerous spy and they start taking very serious steps to remove Mr Wormold and his espionage network from the scene. 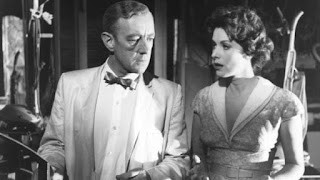 The whole situation is of course farcical but the farce isn’t so funny when people start to get killed. It’s still played for comedy but now it’s black comedy.

Carol Reed was the ideal person to bring the novel to the screen. He was a stylish director and had shown a gift for combining ironic cynical espionage tales in his earlier masterpiece The Third Man which of course was also written by Graham Greene. Quite a few of the visual flourishes that gave that movie its distinctive display make a re-appearance in Our Man in Havana (lots of Dutch angles for example).

Alec Guinness is in sparkling form. I was dubious about Burl Ives as a German doctor but he carries it off rather well. Noël Coward as Hawthorne and Ralph Richardson as ‘C’ are delicious as Wormold’s self-important but ridiculously inept superiors. Comedian Ernie Kovacs is surprisingly good as the secret policeman Captain Segura, a man with an evil reputation and a cheerful disposition. 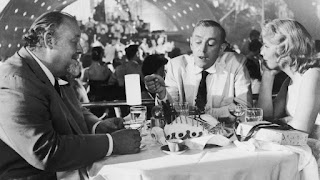 The DVD release from Sony is 16:9 enhanced (the movie was shot in the Cinemascope ratio) and the black-and-white cinematography looks great. There are alas no extras.

Graham Greene, having been an actual MI6 agent himself, understood the absurdities and the deceptions (and self-deceptions) of the game of espionage. This movie adaptation of Our Man in Havana is a delight. It’s witty and lively and combines a light-hearted tone with some truly savage satire. The superb cast certainly helps. Highly recommended.
Posted by dfordoom at 3:39 AM