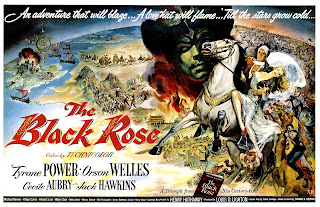 The Black Rose is a 1950 Technicolor swashbuckling adventure film from 20th Century-Fox. It was shot partly on location in Morocco with the studio sequences done in England. And it stars Tyrone Power, one of the greatest swashbucklers of them all.

Every country has its myths and one of England’s most enduring myths is the oppression of the noble Saxons by the cruel and wicked Norman conquerors. That’s the starting point of this movie. Young Walter of Gurnie (Tyrone Power) is a Saxon, the illegitimate son of the Earl of Lessford. His father married a Norman lady and that’s why Walter hates the Normans so much - his father’s half-Norman son inherited everything and he was left with nothing. To rub further salt into Walter’s wounds his father expressed a dying wish that Walter enter the service of the king. Since Edward I (Edward Longshanks) is a hated Norman young Walter is particularly unhappy about this. His situation is difficult enough but things get much worse when Walter joins bowman Tristan Griffin (Jack Hawkins) in freeing Saxon hostages from his villainous half-brother. After which it becomes obvious the it would be a very good idea for Walter and Tristan to get out of England. 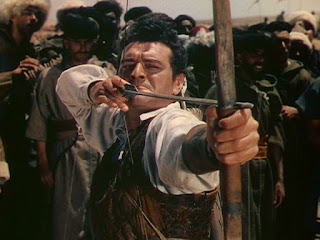 Walter was briefly a student at Oxford and has heard of a place called Cathay, a fabulously wealthy and incredibly advanced country. That seems like a good place to head to. Having managed to get as far as the Holy Land he wangles his way into a caravan bound in the right general direction, laden with gifts for Kublai Khan who is about to conquer China. The caravan is to be escorted by the army of the renowned and much-feared Mongol general Bayan (Orson Welles). Tristan’s prowess with the longbow attracts Bayan’s attention and this combined with Walter’s ability to play a passable game of chess convinces Bayan that these two Englishmen might be of some use to him.

This is a promising development but Walter is about to get himself into hot water again, having been convinced (against his better judgment) to help rescue an English girl known as the Black Rose. She is one of the presents being sent to the great Khan. It turns out that Maryam is not exactly English but she’s keen to go to England since the is part of a miracle that has been promised to her. 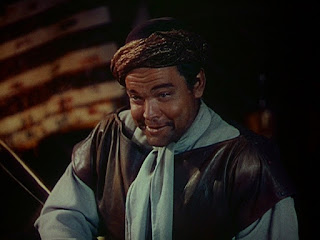 Walter and Tristan enter Bayan’s service. Bayan’s ruthlessness appals the bluff honest Tristan but it doesn’t seem to bother Walter. In fact Bayan’s philosophy that it’s either conquer or be conquered appeals to the embittered dispossessed Saxon. Walter and Tristan will get to see Cathay where they will play a rather equivocal rôle, serving Bayan without being entirely convinced that that’s the right thing to do.

This is a swashbuckler that is to a surprising extent character-driven, and with characters who are not quite straightforward good guys and bad guys. Walter is a good guy but he’s motivated by irrational hatred and bitterness, his judgment is often poor and his moral compass has gone sadly astray. This is the kind of rôle in which Tyrone Power excelled - slightly ambiguous slightly flawed heroes. Power is prepared to take the risk of making Walter a character who is not always likeable. 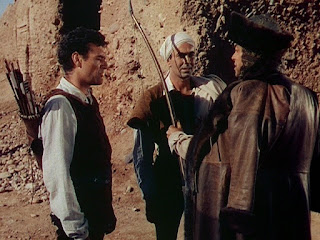 The relationship between Walter and Bayan is the most interesting part of the movie. Bayan (played with gleeful relish by Welles) is a man not particularly troubled by moral scruples. He believes that the best way to win wars is by killing his enemies. All of them. He has no qualms about using terror as a weapon. He’s a villain of sorts, but it was a violent world and he does what he considers to be necessary. He is charming but unpredictable, intelligent and charismatic and Walter falls under his spell. Bayan is also, in his own way, genuinely fond of Walter. He likes men with spirit. Bayan is not a stock villain - he’s complicated and fascinating.

Cécile Aubry as Maryam is very odd. She was twenty-one when she made the film but looks sixteen. She’s exasperating and impossible to reason with. The romantic chemistry isn’t quite there. Aubry had a brief film career followed by a much longer and much more successful career as a writer of children’s books. Jack Hawkins is the perfect brave noble Englishman but he could get away with such stereotypical performances. Michael Rennie is hampered by the script’s insistence on portraying Edward Longshanks as a perfect king. 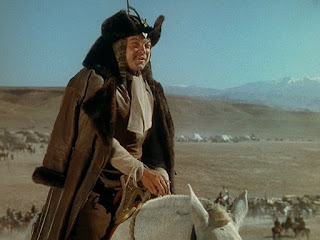 A major plus in this movie is Jack Cardiff’s stunning cinematography. When we think of Technicolor we think of bright glorious saturated colours but Cardiff demonstrates that it was possible to do a lot more than that with the medium - there are some wonderful atmospheric night scenes.

This is one of the five adventure movies included in the superb Tyrone Power Collection boxed set. The DVD transfer is very good. It’s full frame which is perfectly correct and the colours look fine.

This is a typical Tyrone Power swashbuckler, offering adventure and romance with some unexpected touches of moral complexity.

The Black Rose is not the best of the Tyrone Power swashbucklers but it’s still pretty good. Highly recommended.
Posted by dfordoom at 12:57 AM