The Miami Story is a 1954 Sam Katzman production released by Columbia. It belongs to a genre very popular at that time, the crime movie done in a semi-documentary style, sometimes with slight film noir overtones.

Organised crime is out of control in Miami. A committee of concerned citizens has decided that the police are powerless so they’re going to take matters into their own hands. They’re a kind of Chamber of Commerce vigilante committee, although thy have the backing of the police. And they recruit reformed gangster Mick Flagg (Barry Sullivan) to do the active vigilante stuff.

One thing that doesn't quite make sense is that there’s no real explanation of why the police can’t take action themselves. The obvious explanation would be that they’re on the take but the film-makers don’t want to suggest such a shocking thought.

The organised crime kingpin in Miami is Tony Brill (Luther Adler). He’s just had two Cuban mobsters rubbed out (in a very good opening sequence) and a girl travelling with the Cubans, Holly Abbott (Beverly Garland), is afraid she’s going to be next although we never find out why. Mick decides she might be useful to him. 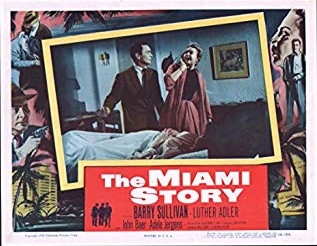 Mick’s idea is to scare Brill into thinking that he’s the new head of a Cuban gambling syndicate about to take over the Miami underworld. His reasoning seems to be that this will put pressure on Brill and maybe Brill will make a mistake. He also figures he might be able to subvert Brill’s second-in-command and chief muscle-man Teddy Delacorte (John Baer) or at least tempt him into making a move against his boss.

It’s best not to think too much about the plot. It’s serviceable but it doesn’t always quite add up. At the beginning we get a message from a state senator assuring us that there is  now no organised crime whatsoever in Miami. There was some but everything’s fine now, honestly.

Being a Sam Katzman production you expect this movie to look very very cheap but it’s not as bad as you might fear. 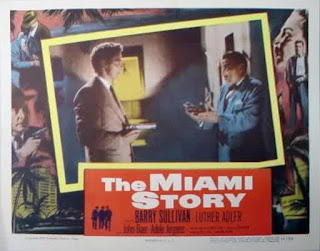 Fortunately there’s plenty of action and suspense. The violence is also rather strong - there are even corpses dripping with blood, rather unusual in 1954 but Katzman was at heart an exploitation producer and this movie is pretty close to being an exploitation movie. Mick Flagg might be the good guy but he slaps women around a lot.

The movie’s big strength is the very good cast. Barry Sullivan is a convincing tough guy. Luther Adler is fun as the big-talking but basically cowardly Tony Brill. Adele Jergens is very good as Holly’s big sister Gwen, definitely a Bad Girl and as hard as nails. I’ve never understood why Beverly Garland didn’t become a bigger star. She does well as Holly, the Good Girl who’d like to save her wicked sister. John Baer is nicely sinister as the smooth thug Delacorte. The Brill-Delacorte relationship is definitely creepy.

The 1954 high-tech surveillance equipment used by the cops adds some more fun. 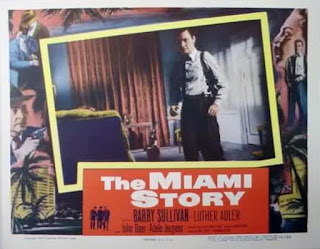 The Miami Story was shot widescreen in black and white. It’s been released in the nine-movie Noir Archive Blu-Ray set from Kit Parker Films. The idea of the Blu-Ray release was really just a way to fit nine movies on three discs. The anamorphic transfer is DVD quality.

The Miami Story is lurid, sleazy, pulpy, violent and tawdry. And the more lurid, sleazy, pulpy, violent and tawdry it gets the better it gets. This is a fun low-budget crime melodrama with a lot of exploitation movie overtones and if that’s what you’re looking for it delivers the goods and the fairly ridiculous plot doesn’t matter. Recommended.
Posted by dfordoom at 2:26 AM