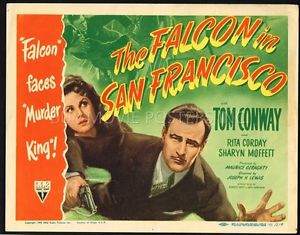 The Falcon in San Francisco was the eleventh of RKO’s very successful Falcon B-movies and the eighth to star Tom Conway as The Falcon. It was released in 1945.

Tom Lawrence (AKA The Falcon) and his sidekick ‘Goldie’ Locke are heading for San Francisco for a well-earned vacation, but of course when detectives go on vacation you can be sure that murder will follow them. On the train they meet a cute little girl named Annie Marshall, along with her cute little dog named Diogenes. Annie solemnly informs them that he is being kept a prisoner in her own house. Of course it’s the sort of crazy thing that eight-year-olds do say so they don’t take much notice.

And then Annie’s nurse turns up dead. Tom Lawrence has a suspicion that it might be murder. So now he’s definitely interested. 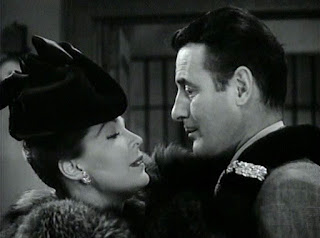 On arrival in San Francisco Tom volunteers to take Annie to her home, and is promptly arrested for kidnapping. He is bailed out by the mysterious Doreen Temple and he is then beaten up. Now Tom is very interested indeed.

He does have one promising clue to what is starting to look like an intriguing mystery. The nurse’s name was Carla Keyes and Tom finds a photo of an Abel Keyes, first mate on the S.S. Citadel, a ship with a colourful past. And there’s a connection between Annie Marshall’s sister Joan and a shipping line, Star Costal Lines, the one for which Abel Keyes works. 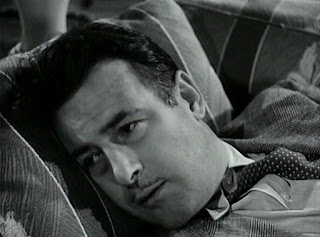 It’s obvious that Doreen Temple is telling lies, but then Joan Marshall isn’t telling the truth either, and neither is the shipping line’s manager, De Forrest Marshall. There’s at least one conspiracy, undoubtedly criminal, at work but there may in fact be more than one. Rather than just blundering about The Falcon sets to work to follow up all the leads. There are double-crosses and the people doing the double-crossing are also being double-crossed. It’s a pretty neat little mystery plot for a B-feature.

Surprisingly for a B-picture there’s some actual location shooting. Joseph H. Lewis, who went on to become a film noir legend as director of Gun Crazy and The Big Combo, was still learning the ropes at this stage but he’s already more than competent and there are a few typical Lewis touches. 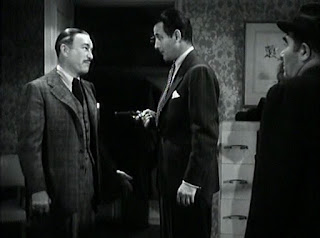 Perhaps not surprisingly for a Joseph H. Lewis movie there’s some effective atmosphere and even a hint of film noir in both the visuals and the tone. This is a well-crafted little film.

Tom Conway breezes through his part with his usual easy-going charm. Edward Brophy as the likeable rough among Goldie provides low-key but non-irritating comic relief. Fay Helm is a serviceable femme fatale. Sharyn Moffett as Annie is cute without being annoying. Rita Corday is fine as Annie’s sister Joan. Carl Kent is excellent as the smooth but sinister gunman Rickey. Overall the acting is very solid indeed. 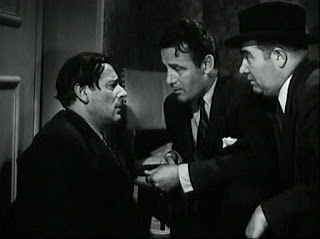 All the Falcon movies are available in two made-on-demand DVD sets from the Warner Archive series. The Falcon in San Francisco is included in the second set. I saw this movie on cable TV so I cannot comment on the quality of the DVD sets although the Warner Archive releases are usually pretty good.

This is an above-average entry in the Falcon cycle (and all the Falcon films are at the very least reasonably entertaining) and it’s an above-average B-movie. It’s well-acted, well-plotted and well-made. The Falcon in San Francisco is highly recommended.
Posted by dfordoom at 5:22 AM