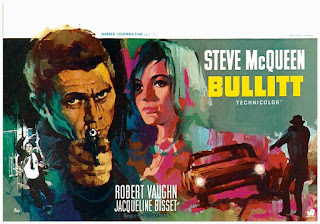 Bullitt was a somewhat ground-breaking movie at the time of its release in 1968. This fact is less obvious today simply because just about every cop movie made since 1968 has been influenced, consciously or unconsciously by Bullitt.

It was not of course the first movie to feature a car chase but it was the first to have a car chase as its centrepiece and its main selling point. It marks a crucial step in the development of the modern action movie. It was the first Hollywood cop movie to be done in an uncompromising gritty and realistic style. It was also unusual for its time in being shot entirely on location.

It’s also the ultimate Steve McQueen movie. If you want to know why McQueen was a very big deal this is the film you need to watch.

McQueen had seen an obscure 1965 British movie called Robbery and had been extremely impressed. Impressed enough to insist on having that film’s director, Peter Yates, direct Bullitt. It was a lucky break for Yates in more ways than one. McQueen wanted Yates to have pretty much complete artistic control and McQueen had enough clout in Hollywood in 1968 to ensure that this happened. 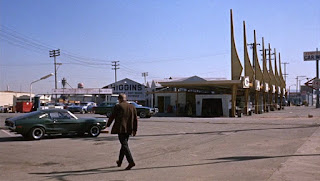 There are, as director Peter Yates explains in his audio commentary, two plot strands and it’s the secondary one that is the important one. The main plot concerns Chicago hoodlum Johnny Ross who is about to testify before a Senate enquiry and of course the Mob is determined he’s not going to live long enough to do that. The secondary plot concerns the cop, Lieutenant Frank Bullitt (McQueen), assigned the job of keeping Ross alive until Monday morning. The real focus of the film is on Bullitt’s story rather than Ross’s.

Right from the start Bullitt clashes with the ambitious, oily, ruthless D.A. Chalmers (Robert Vaugn) for whom Ross is going to be a star witness at the enquiry. Bullitt is not quite a stereotyped maverick cop. On the whole he’s happy enough to follow the rules but he’s increasingly forced into the maverick cop rôle by his own stubborn refusal to compromise (a bit like the hero of Fritz Lang’s The Big Heat).

Acting as bodyguard for Ross turns out not to be so simple. In fact it all starts to go very wrong. Bullitt has the suspicion that it may have been a setup but untangling the details is going to mean putting his career on the line. 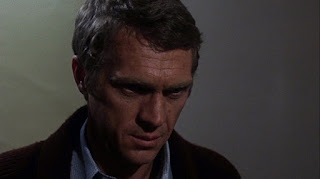 There have been plenty of actors who have encapsulated coolness, but none did so to quite the same extent as McQueen. This is a guy who can play a scene wearing a cardigan and still seem cool and dangerous. McQueen was very much a minimalist actor and it works to his advantage here. He doesn’t seem to be doing very much but what he does do invariably works.


Robert Vaughn gives the performance of his career as Chalmers. Chalmers is evil but it’s not a melodrama villain sort of evil. This is the evil of men who take short cuts, who start making compromises and then can’t stop, who cannot resist the siren song of ambition. Vaughn, like McQueen, deliberately underplays his rôle and the quiet intensity of these two men who despise each other gives the movie its edge.

There are great supporting performances from Don Gordon as Bullitt’s sergeant, Delgetti, and Simon Oakland as his boss, Captain Bennet. Bennet has his own career to consider but he’ll back Bullitt as far as he dares. 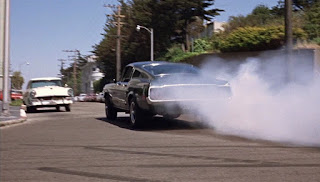 Jacqueline Bisset as Bullitt’s girlfriend Cathy is there to humanise the hero a bit. We need to see that Bullitt is not a single-minded machine, that he does care about people. It’s a thankless rôle for Bisset since the focus is entirely on Bullitt and she really doesn’t have much to do. That’s unfortunate for her as an actress but had her character been more fully developed the movie would have lost focus.

The location shooting is quite superb. The hospital proves to be an incredibly effective location, as does the airport. The action finale at the airport is perhaps even better than the famous car chase.

As for the car chase, I love the way it starts very low-key with Bullitt just shadowing the bad guys’ car with the music building up the tension then as soon as the chase itself starts the music stops. The engine sounds are the only soundtrack needed for the chase. 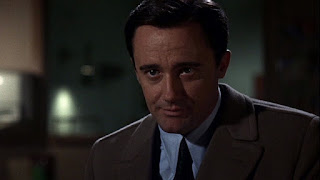 Whether McQueen did all his own driving is a matter of dispute. He certainly seems to have done most of it.

The famous car chase was not filmed, as you might expect, by the second unit. Peter Yates wanted to direct it himself and of course since much of the stunt driving was being done by the star it was a logical enough decision. Maybe later movie car chases are more spectacular but this one still holds up pretty well.

The Special Edition DVD includes plenty of extras. Peter Yates provides an extremely informative audio commentary, there’s a documentary on McQueen and one on film editing plus a contemporary featurette on the making of the movie.

Bullitt redefined the action cop thriller so it has considerable historical importance. It doesn't feel at all dated and it’s great entertainment. Highly recommended.
Posted by dfordoom at 12:59 AM