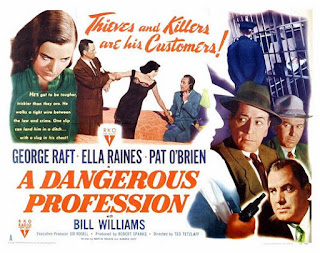 A Dangerous Profession is a 1949 RKO film noir staring George Raft. Not everyone likes George Raft but I like him a lot. His co-star is Ella Raines and that’s another reason for me to be interested in this movie. She’s a rather underrated film noir player.

Raft is Vince Kane, an ex-cop who is now a bail bondsman. He likes it better and it pays better. A while back there was this dame by the name of Lucy Brackett and he thought maybe there might be something between them but it didn’t work out. She had a husband but he didn't know that at the time. He hasn’t forgotten her though. And there was a securities robbery and a cop who got killed and a guy named Claude Brackett that the police wanted to talk to. Brackett claimed to be innocent. Maybe he was. Either way he took a powder and that was the end of that. Until now. Now Vince’s buddy Nick Ferrone (Jim Backus), a cop, has picked up Claude Brackett. The D.A. is pretty interested in Brackett and the bail is set very high - $25,000. 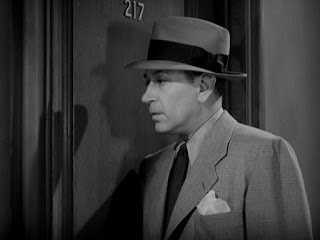 Claude Brackett cannot raise that sort of money and Lucy Brackett can't either. It would be crazy for Vince to put up the money but Vince likes to gamble and he likes women and he likes Lucy and if he’d thought about it maybe he wouldn’t have done it but he does put up the money. To no-one’s surprise Claude skips out again but this time it’s more complicated and this time it ends in murder and Vince is in a bit of a spot.

There are a lot of angles to this case. There’s a less than reputable lawyer called Dawson who put up a lot of money for the bail as well even though Claude Brackett had never heard of the guy. And there’s the guy that Vince spilled coffee on. Vince is interested in that guy. 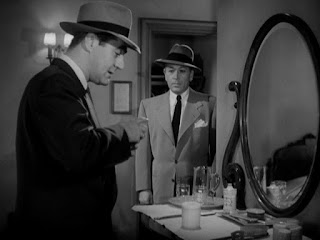 Nick Ferrone is plenty worried though, and he’s not happy about Vince and that dame.

The essence of film noir is a protagonist who isn’t evil but has a weakness and it drags him into the noir nightmare world. In this case Vince has been tempted into playing a very dangerous game with some very dangerous people. But exactly what game is it that he’s playing? Which side is he playing on? And what is he playing for? Is it the girl? Or is it the money? Is he a hero or a villain? Maybe Vince isn’t sure of the answer to that question.

This is a typical George Raft performance. Raft was an actor who played tough guys in an admirably effortless way. Raft really was a tough guy. He didn’t have to act it. But what he was really good at was playing tough guys who were kind of sympathetic, and especially tough guys who took big chances because they liked taking chances. Vince Kane takes a lot of chances. This is a case he should have steered well clear of but that was never going to happen. 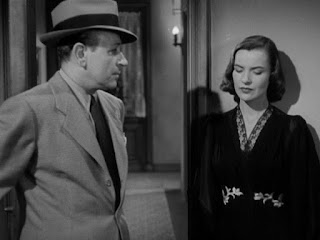 Ella Raines plays Lucy Brackett and she’s not an obvious femme fatale but sometimes it’s the ones that aren’t obvious that you really have to be careful of. Lucy tells a lot of lies. Sometimes maybe she tells the truth, but you can never be sure. She’s a pretty good liar.

The supporting cast is excellent. Jim Backus is better remembered for comic rôles (he was the millionaire in Gilligan’s Island and did a lot of cartoons including Mr Magoo) but he was actually quite versatile and here he does a fine job as a hardboiled cop. Pat O’Brien is terrific as Farley. 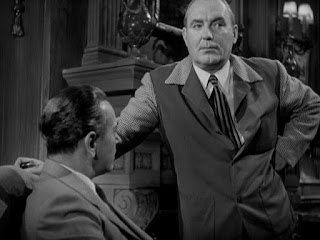 Everyone in this movie is a bit ambiguous. It’s hard to know who’s on the level and who’s a crook and who isn’t.

Ted Tetzlaff was at best a journeyman director but he does OK here. The script has some nice twists. It’s a bit confusing at times but in a film noir that can be a feature rather than a bug.

A Dangerous Profession may not be top-flight noir but it’s fine entertainment. It helps if you’re a George Raft fan (which I obviously am) but even if you’re not there are fine performances from all the other cast members. Highly recommended.
Posted by dfordoom at 5:20 PM