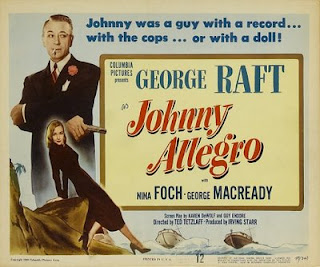 Johnny Allegro is a 1949 Columbia film noir starring George Raft. Now if you’re a regular reader you’ll know that George Raft’s name in the credits is more than enough to entice me.

Johnny Allegro (Raft) is a florist, and apparently a fairly successful one. Then Glenda Chapman (Nina Foch) waltzes up to him in the lobby of the hotel in which his florist shop is situated and starts kissing him. Which is slightly surprising since he’s never set eyes on her before. She hurried explains that she needs him to pretend to know her so she can get out of the building. She’s being tailed by some guy (and Johnny has already spotted the guy as being a cop). What can you do when a beautiful blonde you don’t know asks you to help her out in that kind of situation? You help her out. She is a beautiful blonde after all.

Within the first few minutes Raft, in the most effortless manner, has let us know everything we need to now about Johnny Allegro. He has a shady past (people without shady pasts don’t recognise someone as a cop with a single glance), he’s a guy with a sublime confidence in his ability to handle himself, he likes women and he’s prepared to take risks. 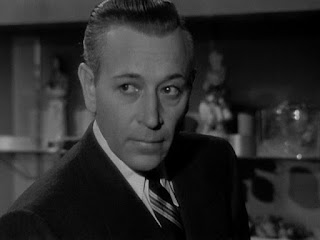 We find out a bit more about him later on. He used to go by the name of Johnny Rock. He’s been in Sing Sing and he left the prison several years ago without bothering to let the prison authorities know he was leaving. We also find out that he was a war hero. He may have had his differences with the law but he’s more than just a common hoodlum.

As for Glenda, she’s a Woman of Mystery. Johnny has no idea what she’s up to. He doesn’t care. He’s hooked.

In fact he’s hooked in more ways than one. He’s had an interesting conversation with a guy called Schultzy (Will Geer). Schultzy is a Treasury Agent and he’s real interested in Glenda. He wants Johnny’s help in the case and he holds out the implied promise that Johnny’s difficulties with the authorities can be made to go away. Johnny doesn’t care too much about that either. He the kind of guy who only cares about the important things in life, like beautiful blondes. 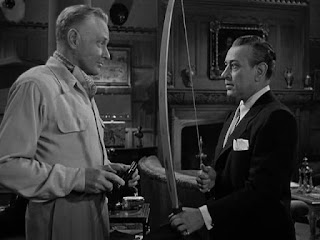 Glenda wants to disappear somewhere and she wants Johnny’s help. At this point he’s going to follow her wherever she decides to go.

Johnny is a fairly typical noir protagonist. He’s an ex-criminal but that was in the past and now he’s a respectable citizen with a solid business. He has an eye for the ladies but he’s a pretty nice guy. He’s well-liked. But like any good noir protagonist he has a couple of weaknesses. His weaknesses are dames and his tendency to take risks. Those weaknesses are going to get him deeply involved with dangerous people. People like Morgan Vallin (George Macready), and people like Glenda.

George Raft is close to being my favourite actor of this era. He has a minimalist acting style which to everyone likes but it’s a style of acting that I like very much. I’m also a fan of Alan Ladd and Robert Mitchum. It’s an acting style that is much harder to pull off successfully than it looks. George Raft practically invented it and no-one does it better. He doesn’t have to go around slugging guys to convince you he’s a tough guy. In this movie we see him arranging flowers and he does it in a way that lets you know that his confidence in his toughness is absolute. Raft also had charm, and he had cool in prodigious quantities. 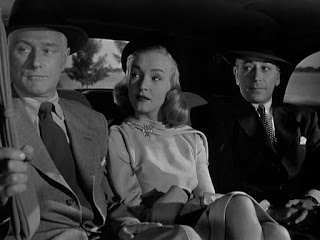 Nina Foch had an unbelievably long acting career (65 years in the business) and she was no stranger to film noir. She handles the femme fatale rôle without any difficulties and her chemistry with Raft is subtle but effective.

George Macready of course was always a great villain. In this case he combines menace with hints of craziness and does so with panache. Will Geer is excellent as Schultzy, the Treasury Agent who has plenty of tricks up his sleeve.

Ted Tetzlaff was a cinematographer turned director. As a director he has an honest workman rather than an artist but he knows what he’s doing here. The script, by Karen DeWolf and Guy Endore from a story by James Edward Grant, has some nice hardboiled dialogue (which the three main stars relish) and a decent plot. It’s a movie that moves along at a brisk pace and it has enough noir style to satisfy those who enjoy such things. 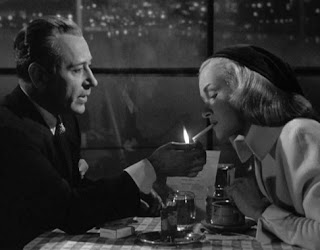 The climactic hunt scenes on the island are pretty exciting.

Johnny Allegro was released on DVD by Sony and it’s also available in the nine-movie Noir Archive Blu-Ray set from Kit Parker Films. The Blu-Ray release was essentially a way to fit nine movies on three discs. Johnny Allegro gets a transfer that is basically DVD quality, but good DVD quality. Image quality is excellent.

As George Raft movies go it’s not quite in the same league as the superb Nocturne or even the underrated Johnny Angel but Johnny Allegro is still a treat for George Raft fans. He’s in top form and this movie delivers solid entertainment. Highly recommended.
Posted by dfordoom at 7:43 PM