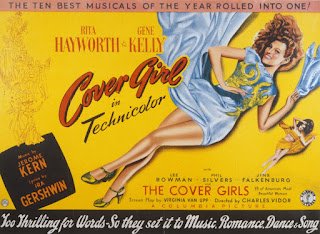 What ingredients do you need for a successful musical? You need songs, dancing, a few laughs, some romance and you need glamour. Columbia’s 1944 Technicolor musical extravaganza Cover Girl has all these elements. The songs are pretty good. The dancing is provided by Rita Hayworth and Gene Kelly so it’s obviously top-notch. The comedy is provided by Phil Silvers and Eve Arden and it’s reasonably good. The romance angle works. And it has absolutely outrageous amounts of glamour. Cover Girl should work perfectly, and to a large extent it does.

The plot is your standard off-the-shelf backstage musical plot as used in countess other musicals. It doesn’t matter. This movie has more than enough going for it in every other department. 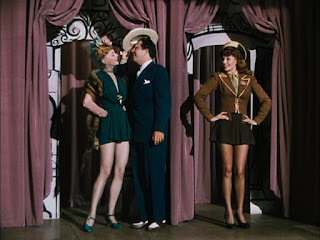 Rusty Parker (Rita Hayworth) and Danny McGuire (Gene Kelly) are a dancing team in Danny’s Brooklyn night club. Danny is grooming Rusty for stardom. It’s not something you can rush. Danny knows that if it happens too fast it won't last. You need patience and careful judgment. And then Rusty, more by accident than anything else, is picked as the cover girl for Vanity magazine’s 50th anniversary issue and it all starts happening much too fast. Maybe not too fast for Rusty, but too fast for Danny. Danny thought that he and Rusty would reach stardom together but now Rusty doesn’t need him. Which is a double blow since he’s madly in love with her.

It’s not that Rusty is selfish or ungrateful to Danny. She’s not that kind of girl. It’s just that opportunity has beckoned and she can’t very well say no to it. And before she knows what’s happening she’s on a roller-coaster road to fame and fortune and she couldn’t get off if she tried. 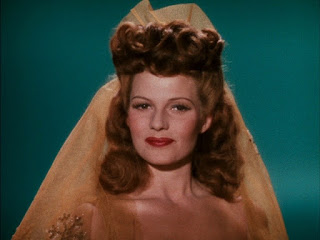 Vanity magazine publisher John Coudair (Otto Kruger) had had a disastrous romance with Rusty’s grandmother Maribelle forty years earlier and he wants to recapture his past by marrying Rusty. There are several flashback sequences, some successful and some less so, with Hayworth as Maribelle. Broadway impresario Noel Wheaton (Lee Bowman) is also after Rusty although whether he’s really in love with her or just sees her as a potential star who will make him a lot of money is open to debate. Sooner or later Rusty will have to make her choice.

In 1944 Gene Kelly was not yet a major star but he was ambitious. Not just ambitious for stardom. He and his co-choreographer Stanley Donen wanted to take the movie musical in new directions. Cover Girl is a sort of dry run for their later collaborations. They didn’t yet have enough clout to do exactly what they wanted but this film did give them the chance to put some of their ideas into practice. The famous sequence of Gene Kelly dancing with himself, trying to work through his fears and doubts, is a pointer to the future. 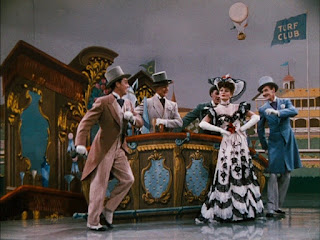 At this stage Rita Hayworth was a star but not yet in the top rank. Cover Girl would make her a very big star indeed. While Kelly is very good the movie belongs to Hayworth. She demonstrates her star quality in no uncertain terms.

Eve Arden is terrific and very funny as Coudair’s assistant. Phil Silvers is a matter of taste. I don’t mind him and in the 40s the hero in a movie like this had to have a comic sidekick.

This is an odd sort of musical. It’s an old-fashioned backstage musical trying rather tentatively to push the boundaries of the genre. The thin script is the main problem. It undermines the attempts to give the characters more psychological depth than was customary in a mid-40s musical. 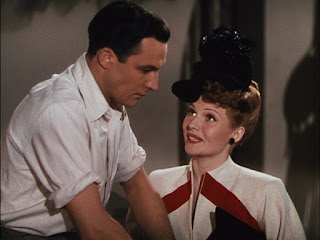 The Region 4 DVD doesn’t have much in the way of extras, apart from a very brief but perceptive interview with Baz Luhrmann. It offers an excellent transfer. The colours look great.

Despite some weaknesses this is a must-see for Gene Kelly fans. The innovations he introduced to the genre are all here, albeit in embryo. And it’s a must-see for Rita Hayworth fans who want to see her at her most seductive. Cover Girl is highly recommended.
Posted by dfordoom at 5:28 PM