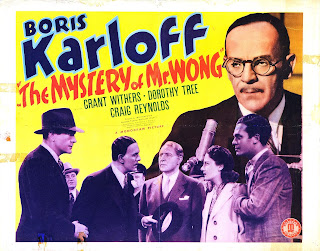 The Mystery of Mr Wong is the second of the series starring Boris Karloff as the great Chinese detective Mr Wong. It was released in 1939.

The subject of Hollywood attitudes towards Asia and Asians from the 1920s to the 1950s is a fascinating one. There was a considerable interest in Asian subjects on the part of the American public and Hollywood saw those subjects as being good box office. In particular there was a huge vogue for Asian detectives. There was the immensely successful series of Charlie Chan films. 20th Century-Fox enjoyed comparable success with their Mr Moto crime/spy thrillers. And then there were Monogram’s Mr Wong movies.

All of these movies featured Chinese (or in the case of Mr Moto Japanese) characters as heroes. They were characters who were brilliant, brave, resourceful and noble. The other Asian characters who appeared in subsidiary rôles ran the gamut from the heroic to the entirely villainous. 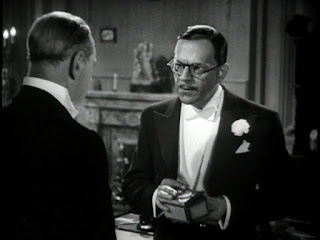 These days of course the very idea of having a Chinese character portrayed by a Caucasian actor would be regarded by many as offensive in itself. But this is Karloff, a great actor, and Mr Wong is certainly not a mere stereotype. Karloff avoids any temptation to play the character for laughs or to ham it up, and in fact he underplays his performance. He also doesn’t look or sound remotely Chinese! He plays Mr Wong as an English gentleman, which given the fact that the character was supposedly educated at Oxford this is perhaps not as as bad an acting choice as you might think. And Karloff had a genius for endowing every character he ever played with dignity.

The reality was that these B-movie series rely a great deal on the charisma and star quality of the lead actors, and there was at that time no Chinese actor in Hollywood with both the ability and the box office clout to carry it off. When Karloff departed after the first five films Keye Luke took over the part but sadly he lacked the star appeal of Karloff (and he was also hampered by the fact that Karloff had stablished the character as a rather stately middle-aged man). 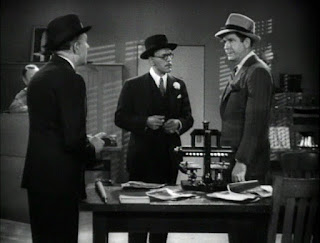 At least some of the supporting roles are played by Chinese actors, and none could really be regarded as stereotypes. Of course this was 1939, and growing US hostility to Japan (engaged at that time in a war with China) was going to encourage favourable attitudes towards China, so it’s possible that this political background is partly responsible for the generally sympathetic tone of the movie.

So how does it stack up simply as a murder mystery? It has an incredibly convoluted plot generously littered with red herrings, and it’s entertaining enough without being anything wildly sensational. A wealthy American collector named Edwards has obtained possession of a fabulously valuable jewel known as The Eye of the Daughter of the Moon. This jewel was looted during the Japanese sack of Nanking, it has considerable cultural significance, and both the Chinese government and many Chinese-Americans are distinctly unhappy that it has been taken out of China. When the collector is murdered this could well be the motive, but it’s not by any means the sole possible motive. And to make things more interesting, the collector predicted his own slaying and left behind a letter naming his future murderer! 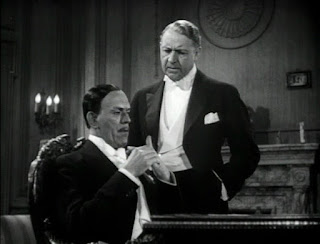 The murder itself is done cleverly and with great style, during a game of charades.

There are other possible motives, apart from The Eye of the Daughter of the Moon. Edwards was an insanely jealous man and had quarrelled with a number of men he suspected of taking an excessive interest in his wife. He had also changed his will, providing another very strong motive. The plot is complex but satisfying.

Karloff is excellent, naturally. Grant Withers is in all the Wong movies, playing Wong’s policeman friend Captain Street. Street is a sympathetic character, a cop who does his best and is smart enough to know that it’s always a good thing to have Mr Wong’s help on a case. Dorothy Tree plays Edwards’ wife with perhaps a bit too much hysteria. 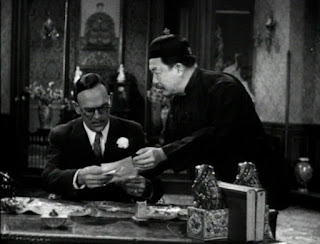 This movie series was based (very very loosely) on Hugh Wiley’s James Lee Wong stories (which I reviewed here). Wiley’s version of the character is also an educated man but he’s a Yale man rather than an Oxford man. He’s also a youngish man and he’s a special agent with the Treasury Department. The stories themselves are also much more hardboiled compared to the movies.

The Mr Wong movies have all fallen into the public domain and have had some very dubious DVD releases. All six movies have recently been released in a two-disc set from VCI and the transfers are really very good.

The Mystery of Mr Wong is a B-movie but it’s a quality B-movie, and it’s extremely enjoyable. Highly recommended.

You might also want to read my review of the next movie in the series, Mr Wong in Chinatown.
Posted by dfordoom at 1:32 PM