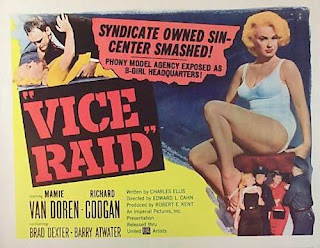 Tough but honest cop Sergeant “Whitey” Brandon (Richard Coogan) has been trying to break up a vice racket run by mobster Vince Malone (Brad Dexter). The reason he’s been having so much trouble (as the audience finds out right at the beginning) is that Malone has so many crooked cops on his payroll.

Malone is getting tired of the pressure from Brandon and he cooks up a plan to deal with the problem. 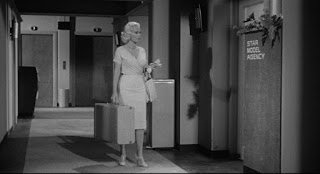 For the plan to work Malone needs a girl with looks and brains and the Syndicate has just the right girl - Carol Hudson (Mamie van Doren). This is a rôle that gives Miss van Doren a chance to strut her bad girl stuff. Carol is one dangerous broad. She has the body of a goddess and the morals of an alley cat.

Carol’s job is to set Brandon up so he looks like a corrupt cop. The plan succeeds and Brandon is out of a job. But Brandon is not a guy who gives up. Now he’s on a one-man crusade against the vice racket and everyone associated with it, including corrupt cops. He just needs to find a weakness in Malone’s setup. He has one big advantage - this is a personal vendetta and he’s happy to risk his own skin if it’s necessary. 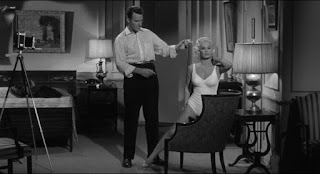 Carol’s problem is her kid sister Louise (played by the delectable Carol Nugent), fresh off the bus from Iowa. Louise is physically all grown up but she’s as naïve as they come. The only thing Carol cares about, apart from money, is little sister. The smart thing would be to put Louise straight back on that bus to Iowa, but persuading Louise to go proves to be a challenge. Louise can’t believe how much money her big sister makes as a model. She naturally doesn’t know that Carol is no model. This is Louise’s first glimpse of the glamour of the big bad city and she likes what she sees.

Brandon starts to make his moves in a dangerous game of bluff with Malone. Malone is a tough customer, tally untroubled by moral scruples. He does have a weakness however. He understands the rackets but he doesn’t understand women. 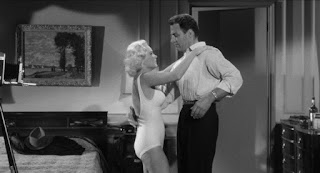 The plot is fairly routine. You can predict most of what’s going to happen. Which doesn’t really matter. It’s executed with plenty of energy and a fair amount of sleaze (a lot of sleaze by 1959 standards) although the sleaze is mostly implied. This is pretty close to being an out-and-out exploitation movie. Since it was released by United Artists it’s perhaps not a true exploitation movie, but it has some of that grungy feel to it. This is a very cheap movie with just a limited number of very basic sets but it was photographed by Stanley Cortez so it manages to look better than it has any right to look.

Mamie van Doren is in fine form. She’s hardbitten and sexy but as she often did van Doren manages to make her character believable. She wasn’t a great actress but she gives it her all and she dominates the movie. 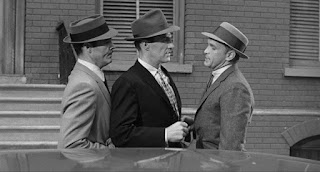 Vice Raid belongs to an era in which movies like this tried desperately hard to be salacious but they had to pull their punches. They can’t actually tell us that Malone’s model agencies are fronts for prostitution (or that Carol is a prostitute) but they can make sure we figure it out. And perhaps surprisingly they do tell us outright when one of the female characters is raped (and while we only see the lead-up to the rape the woman’s obvious terror is quite harrowing).

Vice Raid is a routine B-movie potboiler but it has Mamie van Doren and she’s reason enough to see it. Recommended.
Posted by dfordoom at 12:44 AM