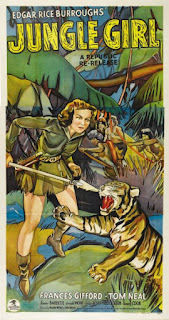 Jungle Girl is one of the series of excellent late 1930s/early 1940s Republic serials directed by William Witney and John English. This one was released in 1941 and introduced Nyoka the Jungle Girl who would also feature in a later William Witney-directed serial, Perils of Nyoka.

Jungle Girl is supposedly based on a novel by Edgar Rice Burroughs. Now Burroughs did indeed write a novel called Jungle Girl. And a very good novel it is too - you can read my review here. But there is absolutely no connection whatsoever between this novel and the Jungle Girl serial. Obviously Republic bought the rights to the book since the Edgar Rice Burroughs name would be a definite box-office asset and then proceeded to create their own story. Which doesn't matter. Jungle Girl is a fine novel, and the Jungle Girl serial is terrific as well. They’re just not related in any way.

Nyoka (Frances Gifford) does seem a little bit like a lady Tarzan. She travels through the jungle by swinging through the trees on vines, she rides elephants and she knows the jungle like the back of her hand. But Nyoka is not an orphan raised by apes. She lives in the depths of the West African rainforest in the unexplored region of the Simbula Swamps, in the territory of the Masamba tribe. She lives there with her father, Dr John Meredith. Many years earlier Dr Meredith saved the life of the chief of the Masamba and as a result he was made the tribe’s witch doctor or medicine man and he has spent the intervening years bringing the benefits of modern medicine to the Masamba.

There is a reason that Dr Meredith has chosen to remain deep in the jungle and and has chosen to raise his daughter Nyoka there. He has an evil twin brother named Bradley, a notorious criminal now serving a long prison sentence, and his self-imposed exile is his way of avoiding any contact with his brother, and avoiding the scandals associated with his brother. Nyoka is therefore, like Tarzan, caught between two worlds. She has picked up a western education from her father and she has picked up the lore of the jungle as well. 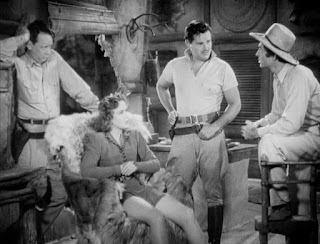 Everything is fine until Jack Stanton (Tom Neal) arrives in his aeroplane with a passenger, a certain Slick Latimer (Gerald Mohr). Latimer tells Dr Meredith that his brother is dying and that he must go to him immediately. But maybe it isn’t a great idea to trust Slick Latimer. Nyoka has some problems to deal with as well. When Dr Meredith became the tribe’s witch doctor the previous holder of that office, Shamba, was displaced. And he’s been brooding about it ever since. Now he’s ready to do something about it. He’s ready to perform some nasty voodoo rites and to take more direct steps as well, with Nyoka as his target.

The key is the Lion Amulet, which is not only the badge of office of the current medicine man, it also allows across to the Caves of Nakros. That’s where the tribe keeps its treasure. And that treasure consists of an immense hoard of diamonds. 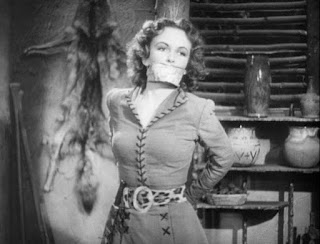 Frances Gifford is an energetic and appealing heroine. She looks convincing athletic and she’s very attractive. She’s not a great actress but she’s quite adequate. Tom Neal as Jack is an interesting choice for the hero rôle. He’s remembered today for his off-the-wall and disturbingly intense performance in Edgar G. Ulmer’s bizarre but fascinating 1945 film noir Detour. He’s intense here as well, making him intriguingly different to most serial heroes. In fact his acting is pretty decent. So we have a genuinely interesting heroine and a genuine interesting hero.

We also have a pretty cool villain in Slick Latimer, played by Gerald Mohr who positively drips with evilness.

It’s quite amusing that very few of the Masamba tribesmen look even slightly African. In fact I think the actors playing those parts cover just about every ethnicity except African. The Masamba chief is played by a Hawaiian while the evil witch doctor Shamba is played by a Syrian. 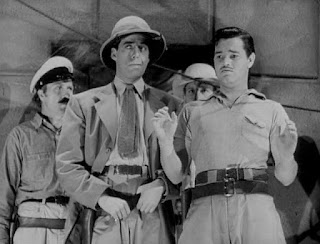 There are all the usual hazards for our heroes to face. The only problem with jungle serials is that you pretty much know you’re going to get a guy in a gorilla suit, poison darts, the hero wrassling crocodiles and lions, etc. What matters is that being a Republic serial of this era the fights, the stunts and the cliffhangers are all without exception extremely well executed. There’s an excellent cliffhanger ending that is incredibly similar to an equally excellent cliffhanger in an earlier William Witney-John English serial, the superb Daredevils of the Red Circle. And one cute touch is that in this serial it’s the heroine, not the hero, who wrassles crocodiles and lions barehanded. She gets captured a lot and has to be rescued, but Jack and his sidekick Curly also get captured a lot and Nyoka does her share of rescuing.

With most serials you have to put up with at least one filler chapter made up of flashbacks from earlier chapters but that’s not the case here. There are also no real pacing problems - the action keeps moving along pretty nicely. 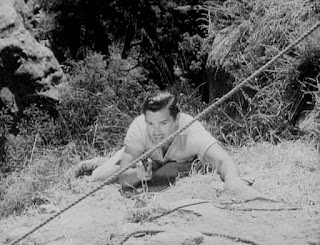 The fact that Jack has a plane which plays an important part in the story adds some further interest and there’s an aerial action climax.

VCI’s DVD release is very pleasing. The transfers are very good. The earlier VHS releases of this serial have a very poor reputation (even by VHS standards) for image quality but there’s nothing to complain of here.

Jungle Girl is certainly a superior serial. It’s better acted than most, the jungle setting is utilised well, the cliffhangers are great and it’s generally very enjoyable viewing. Highly recommended.
Posted by dfordoom at 4:52 PM