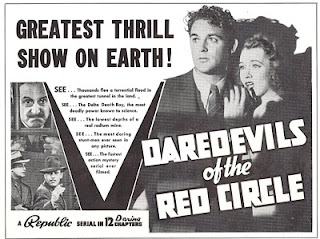 Daredevils of the Red Circle is a 1939 Republic serial directed by John English and William Witney. Which means it’s probably going to be very good. We shall see.

It starts off with a bang, literally. An escaped convict (played by Charles Middleton - yes, Ming the Merciless!) who goes by the name of 39013 (his prison number) is systematically destroying the business empire of a man named Granville. He’s destroying it by blowing it up, piece by piece. His current target is the Granville Amusement Park and his bomb outrage there makes him three implacable enemies - three carnival daredevils. One is a high diver, one is a strongman and one is an escape artist. All useful skills for the heroes in a serial!

The first episode offers everything you could ask for. It has lots of action, impressive visuals, a whizz-bang cliffhanger, a touch of tragedy and a touch of mystery - we know what 39013 is up to but we don’t really know why or what his ultimate intentions are. 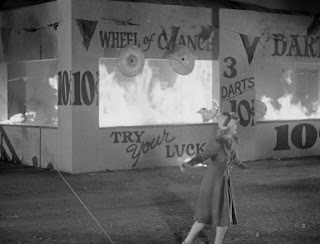 The mention of tragedy is important. This is a serial in which real people really can get hurt, or even killed. That’s a daring strategy for a serial but it does give the suspense a definite edge. If they’re prepared to kill off a character (and a sympathetic character) in the first chapter you know that none of the characters is entirely safe. When they seem to be in danger you really believe they are in danger. 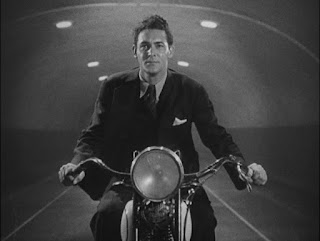 Willian Witney (who apparently directed most of the action scenes) had a reputation for doing extremely good cliffhanger endings. And this serial has plenty of great examples of just that. The circus fire in the opening chapter, the destruction of the mighty tunnel, the burning oil well - these are superb action set-pieces and they provide thrilling cliffhangers.

Now you might be thinking this all sounds swell but if only they’d managed to get a death ray into the story somewhere. Well don’t despair - there is indeed a death ray!

The acting is very decent. It’s no surprise that Charles Middleton makes an absolutely  splendid villain (which is not a spoiler since we know he’s a bad egg right from the start). Miles Mander has a fascinating rôle which presented some subtle acting challenges (he’s not always quite what he seems to be) and he carries it off with style and confidence. Carole Landis is a fine leading lady who adds a touch of glamour. The actors playing the three daredevils (Charles Quigley, Herman Brix and David Sharpe) may not be great actors but they’re convincingly athletic heroes and in this serial that matters a lot more than acting ability. 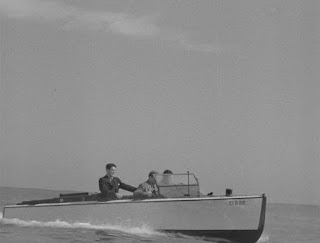 Carole Landis makes a perfectly fine heroine. Mention must also be made of Tuffie, the daredevils’ dog, who not only gets to do clever things but reasonably convincing clever things.

They didn’t have the budgets that Universal had for their serials (Daredevils of the Red Circle was made for just $126,000) but Republic really knew what they were doing when it came to making to getting plenty of bang for their buck. The special effects and the stunts really are excellent. The miniatures work is generally very impressive. Even the rear projection shots are done competently. There are explosions and there are some great fires. William Witney was renowned for doing terrific fight scenes and there are lots of them here. 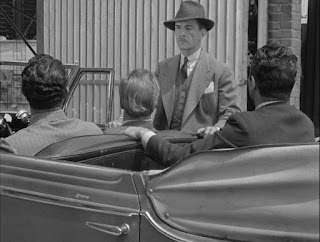 There’s also a lot of location shooting and the locations have been very cleverly chosen (and are used with great skill). The Granville house itself is riddled with secret passageways which provide endless opportunities for thrills and surprises.

Kino Lorber’s DVD presentation offers an extremely good transfer indeed and it even includes audio commentaries (by film historian Michael Schlesinger) on several of the episodes.

Daredevils of the Red Circle is one of the best of the Republic serials, which means it’s one of the very best of all the serials of its era. It’s entertainment plus and it’s highly recommended.
Posted by dfordoom at 10:14 PM