Wrong Number is a 1959 British crime thriller. Now I love mysteries and thrillers set on trains so when a movie opens with a pretty girl emerging from hiding in a laundry basket in the baggage compartment of a speeding train and said girl starts helping herself to the mail bags it’s got my attention right from the start.

Unfortunately we don’t see any more of trains but we do get a simple but clever little plot. Dr Pole has been the brains behind a series of daring robberies, including that train robbery. The gang’s next job is an armoured car heist. As usual Dr Pole has come up with a sound plan but a criminal mastermind is only as good as his underlings and Dr Pole’s underlings make a right old hash of this job. Killing one of the guards is just one of their blunders. Even worse, Max (Barry Keegan) addresses Angelo by name during the robbery and the surviving guard hears him do it.

Even taking these mistakes into consideration the gang should get away with the crime. Dr Pole is careful to use underlings without criminal records. And although the robbery nets the gang eighty thousand pounds Pole is smart enough and cautious enough to insist that all the five pound notes included in the haul should be destroyed - fivers are just too easy for the police to trace. That leaves forty thousand but forty thousand quid was a great deal of money in 1959 and it’s a safe forty thousand. 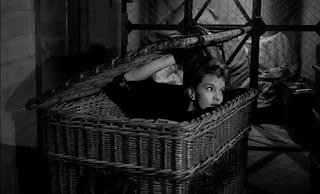 But there is one misfortune that Dr Pole didn’t count on. Part of the plan was for Angelo to telephone Maria after the robbery to let her know that everything went smoothly. Unfortunately an eccentric old lady named Miss Crystal (Olive Sloane) is very worried about her beloved little dog that night and decides to ring the local vet. She gets a wrong number - she rings Dr Pole’s house by mistake and Maria answers the ’phone and since she assumes it is Angelo she uses his name.

This wouldn’t matter except that Miss Crystal is an avid reader of the crime news in the newspapers and the account of the heist mentions that one of the gang members is named Angelo. After discussing the matter with her dog Miss Crystal feels it is her civic duty to notify the police of that odd telephone call. 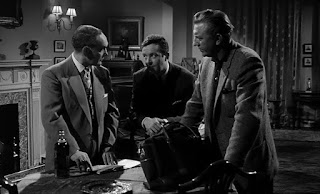 Sadly Superintendent Blake has to break the bad news to Miss Crystal that her evidence is of no use - there is no way to trace a wrong number if the number was dialled through an automatic telephone exchange, as this call was.

In fact that telephone call will turn out to be vital after all, and in a way that is simple but quite clever and effective.

The plot is driven to a large extent by mistakes on the part of the thieves and some very bad luck but the mistakes and the bad luck are quite plausible - even the major plot twist turns out to be entirely plausible. 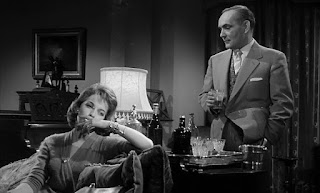 This movie is typical of the cheapies churned out by Merton Park Studios at this time. In other words it’s a lot better than you might expect and everything about it is very competent. Vernon Sewell was the kind of guy who could be relied on to direct this type of movie briskly and efficiently (he also directed the rather good Spin a Dark Web). James Eastwood’s screenplay is not fancy but it is effective (Eastwood also wrote the excellent The Counterfeit Plan).

And the acting is top-notch. Paul Whitsun-Jones is very good as the easily panicked gang member Cyril. Peter Elliott does a fine job as Dr Pole, described rather neatly by a member of his gang as a clever man, but not quite clever enough. He’s also an interesting mix of menace and weakness. Peter Reynolds is fine as Angelo. Olive Sloane overacts outrageously as the delightfully dotty Miss Crystal, which is absolutely the correct approach. The acting standout though is Italian bombshell Lisa Gastoni as Maria. She captures Maria’s smouldering sensuality without playing her overtly as a sexpot or a femme fatale. Maria is just one of those women who make men do crazy things. They can’t help it and she can’t help it. 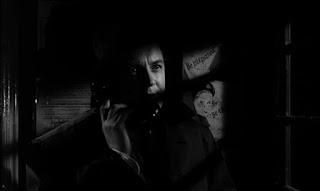 The budget was obviously not going to stretch to any spectacular action set-pieces but the heist sequences are well executed.

This DVD is precisely what we expect from Network in the UK - no extras, an excellent 16:9 enhanced transfer and a reasonable price tag.

Wrong Number has a neat little plot, terrific acting and just the right amount of humour (in other words the humour is kept within very strict limits). It’s a movie that achieves its strictly limited objectives without making a fuss about it. It’s just a totally unpretentious crime B-movie. The running time of just one hour ensures that it’s unlikely to wear out its welcome. Highly recommended.
Posted by dfordoom at 4:27 PM