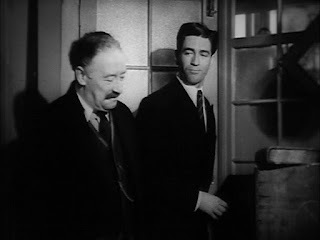 The Frightened Man, released in 1952, is a thoroughly unpretentious and conventional but very enjoyable British crime B-picture. It was produced by Robert S. Baker and Monty Berman (who would enjoy great success as television producers in the 60s) and written and directed by John Gilling (who did some very underrated crime melodramas in the 50s and a couple of extremely good gothic horror flicks for Hammer in the mid-60s). The Frightened Man also has at least some claims to being a film noir.

Elderly antiques dealer Rosselli (Charles Victor) is immensely proud of his son Julius. Julius is at Oxford, studying to become an architect. Only Julius isn’t at Oxford any more, having been sent down for being a drunken violent thug. Julius is in fact pretty much entirely worthless but his doting dad just can’t see it. 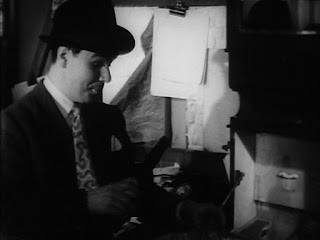 Julius certainly has ambition. He intends to be a big man some day. He has no intention of actually working to achieve success. He just assumes that he’s entitled to it. His first step on the road to riches is to steal sixty quid from dear old dad to buy himself a car. He needs the car to impress Amanda (Barbara Murray). Amanda already has a boyfriend, a very decent chap named Harry, but that’s not going to stop Julius. Amanda is a nice enough girl but she has zero judgment when it comes to men. Julius is clearly the sort of man that a woman should steer clear of but she thinks he’s handsome and exciting and misunderstood.

Julius’s next step on what he thinks is his path to success is to get a job. Not a real job or an honest job of course, but something much cleverer and better than that - driving the getaway vehicle in a robbery by the Camden Mob. He proves to be a failure as a wheelman but he isn’t deterred. Through Amanda he has discovered an opportunity too good to pass up - a shipment of diamonds just begging to be stolen. And being convinced that he is a budding criminal genius he comes up with a plan to steal those rocks and he manages to sell his idea to the leader of the Camden Mob. 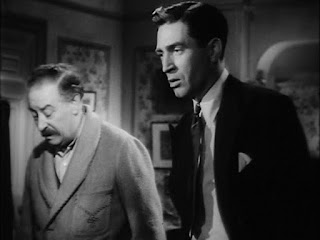 Of course like so many criminals before them these would-be jewel thieves have never even considered the possibility that Scotland Yard might be one step ahead of them. Actually Inspector Bligh is one step behind them but he’s a professional and he’s catching up fast. He knows a big job is going down, there are some major gaps in his knowledge (he doesn’t know the details or the identity of everyone involved) but slowly and methodically the Yard is filling in those gaps.

There is a sad inevitability about the outcome and that’s one of the things that gives The Frightened Man a slightly noirish flavour - the criminals are rats about to enter a trap and you know they’re just not smart enough to realise that they’re not going to make it.

There is as I said an inevitability about the failure of this ill-advised criminal scheme but the movie does have some plot twists up its sleeve. 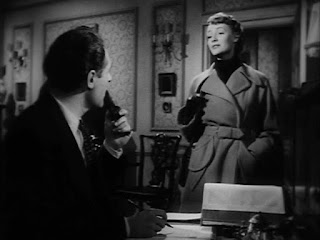 The acting is excellent. Dermot Walsh makes a fine arrogant but stupid and deluded bad boy who thinks he is destined for great things. Barbara Murray does well as Amanda, making her sympathetic in spite of her shallowness and folly. Charles Victor is extremely good as poor old Rosselli. The supporting players are uniformly good. I particularly liked John Blythe as the cocky but not overly bright thief Maxie and Annette Simmonds as the possessive gangster’s moll Marcella.

There’s more location shooting than you might expect in such a low-budget movie. There are no spectacularly noir visuals but Gilling achieves an effective mood of futility and inescapable failure. 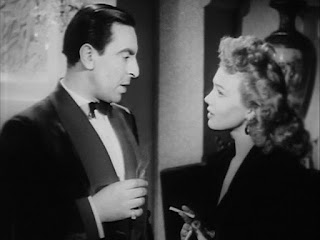 With these kinds of B-movies you’re never quite sure whether you’re going to get a neatly wrapped-up happy (or at least vaguely hopeful) ending or whether it’s going to be totally downbeat. I’m not going to tell you which way this film jumps but the ending is I think quite satisfactory.

The Frightened Man is one of six films included in VCI Entertainment’s three-disc British Cinema: Classic 'B' Film Collection, Volume 1 DVD boxed set. The transfers are nothing to write home about, being television prints (and in the case of The Frightened Man the image quality is quite iffy at times). On the other hand these are six interesting movies which any self-respecting fan of B-movies in general or British mystery/thriller films will want to see.

The Frightened Man is a low-key but well-crafted and very well-acted crime melodrama with a dash of film noir. Recommended.
Posted by dfordoom at 12:00 AM