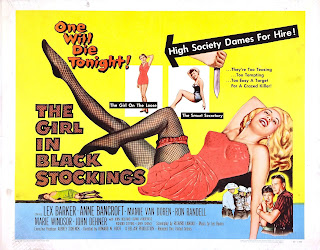 The Girl in Black Stockings, released in 1957, is part of Kino Lorber’s three-movie set of steamy crime potboilers featuring the legendary blonde bombshell Mamie van Doren although she actually plays only a supporting rôle in this particular movie.

A women’s body is found in the bushes at a resort hotel in Utah. The young woman apparently had a less than respectable reputation. The body is found by lawyer Dave Hewson (Lex Barker) and Beth Dixon (Anne Bancroft). The obvious suspect would be Edmund Parry (Ron Randell), the owner of the hotel and a man who thoroughly hated the dead girl (in fact he doesn’t seem overly fond of women in general). Parry is looked after by his devoted sister Julia (Marie Windsor). But Parry is completely paralysed so that pretty much eliminates him as a suspect. Fortunately (or from the sheriff’s point of view unfortunately) there are plenty of other suspects. 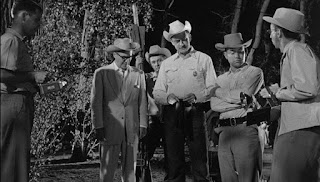 Pretty soon the bodies start to pile up. The sheriff knows he’s dealing with a psycho but there seem to be plenty of potential psychos among the suspects.

Apart from those mentioned above there’s a faded movie star, his blonde good time gal girlfriend Harriet (van Doren) and a local Lothario. I was pretty certain I knew what the solution was going to turn out to be but I admit I was totally wrong.

This was 1957 so while there are plenty of brutal murders the violence occurs off screen. The sexual content is obviously entirely implied as well but Mamie van Doren still manages to heat things up in her inimitable style. 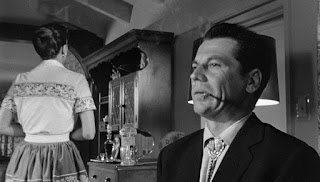 For a cheapie B-budget this film boasts a pretty strong cast. Anne Bancroft and Lex Barker are the headliners but of course there’s Mamie van Doren and Marie Windsor, both B-move favourites. And in one of his most substantial rôles, as the local sheriff, there’s John Dehner and he’s one of my favourite American character actors. Ron Randell doesn’t let the fact that the character he’s playing is paralysed stop him from chewing the scenery.

All the performances are very good. The players are giving it everything they’ve got and there really aren’t any weak links among the cast. Ron Randell is the standout - he really is scary and creepy. 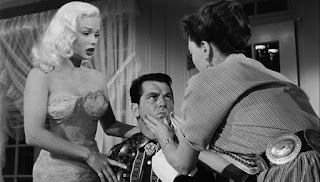 This is very much a B-picture but it has absolutely everything you could wish for in a B-picture. There’s some reasonably lurid subject matter, there’s glamour and there’s a well-constructed script by Richard H. Landau with some good red herrings and an effective shock ending. Director Howard W. Koch does a fine job. Given the low budget he can’t do anything too fancy but he gives us some nicely atmospheric moments and there’s certainly no reason to complain about the pacing. It’s a well-crafted little movie.

Location shooting was done at the Parry Lodge in Utah. It’s a great location which was used in countless movies and I believe it still exists. 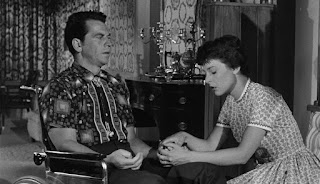 The anamorphic transfer is excellent. The extras include a fascinating interview with Miss van Doren (who is at the time of writing still very much alive). She talks about the three movies included in the set (of which she has fond memories) and about her 1950s career in general.

The Girl in Black Stockings is a solid murder mystery with perhaps some very faint noir tinges. It’s content to be a B-movie, but it’s a good and very entertaining B-movie. Highly recommended even if Mamie van Doren doesn’t get anywhere near enough screen time.
Posted by dfordoom at 6:47 PM