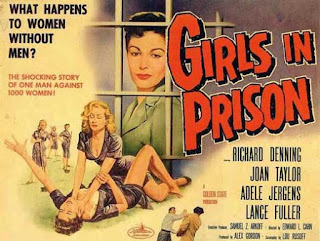 When a movie has a title like Girls in Prison you could be forgiven for thinking it’s going to be one of those hair-raisingly sleazy women-in-prison (WiP) movies of the 70s and early 80s. But this particular movie was made in 1956 so you know you’re not going to get graphic torture and lots of bare female flesh. So what exactly are you going to get?

There were relatively respectable mainstream movies dealing with women in prison, movies like Caged (made by Warner Brothers in 1950). Of course there’s no getting away from the fact that the subject matter is going to have at least a slightly lurid tinge but these movies at least tried to deal with the subject without too much sensationalism.

Girls in Prison seems to be a bit of a hybrid. It’s a low-budget B-movie which is not quite an exploitation movie but it veers pretty close to the line. 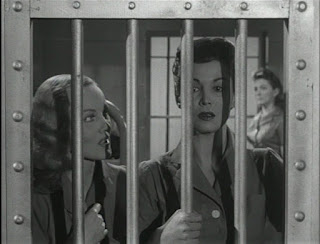 The movie’s pedigree may provide some hints as to the intentions behind it. Producer Alex Gordon made lots of movies for American International Pictures. Director Edward L. Cahn and writer Lou Rusoff had much the same sort of background. Executive producer Samuel Z. Arkoff was the man behind countless very cheesy although often very entertaining very low-budget flicks. This all suggests that this movie is not going to be an actual exploitation movie but it is going to be very much drive-in fodder. The film’s tagline - What happens to girls without men? - certainly has nicely lurid overtones.

Ann Carson (Joan Taylor) has earned herself a nice long stretch in the women’s penitentiary for her involvement in a bank robbery. Naturally she claims that she had no idea those men she was with actually intended to rob the bank. The court didn’t buy her story and the prison governor doesn’t either. But Rev Fulton (Richard Denning), the youngish very handsome do-gooder prison chaplain, swallows it hook, line and sinker. He just can’t believe that such a sweet innocent young girl (she’s supposed to be just twenty although Joan Taylor was twenty-seven and looks it) could have been mixed up in anything illegal. 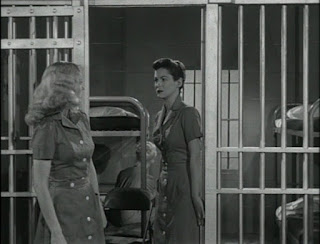 While this is very definitely a women-in-prison movie and almost all the action takes place in the prison or in the fields where the women are put to work it’s also a crime thriller. A lot of money was stolen in that bank robbery. Everybody believes that Ann has the proceeds of the robbery stashed somewhere. And everybody wants it. Rather cleverly the movie keeps things a bit ambiguous. We figure out right from the start that the story Ann told in court was probably not strictly true in every detail but we’re still not sure of the precise nature of her involvement in the robbery. It is possible that she was an innocent dupe, or perhaps mostly innocent, or perhaps manipulated. Or she might even be totally guilty. It’s not just that her story is not absolutely convincing. Her behaviour is just a little odd.

Some of those who want that money are prepared to take drastic steps to get it. Ann shares a cell with Jennie, the tough-as-nails queen bee among the prisoners, and Melanee, a southern belle who’s probably never been within five hundred miles of the South. Jennie and Melanee are not exactly pals but they’re willing to work together to find a way to separate Ann from the money. There’s also a hoodlum on the outside who thinks he can get the money through Ann’s dear old dad (who is actually a conniving old ex-con). Given the pressure Ann is under you’d think she’d be delighted that Rev Fulton is trying to get an appeal ring on her behalf but she seems strangely hostile to the idea. Which doesn’t bother Fulton - he’s found someone to save and he’s going to save her whether she likes it or not. 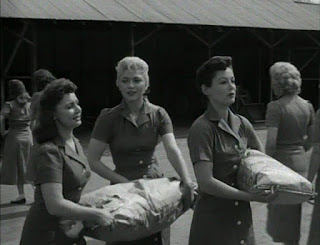 It all leads up to a fairly outrageous climax.

There is a certain theme that plays a major rôle in every women-in-prison movie made from the late 60s onwards. There’s going to be at least one female prisoner who is perhaps just a little too fond of other girls, if if you catch my drift. This theme is introduced in Girls in Prison very early on. Poor Ann finds herself being fondled and she’s not too happy about it. She doesn’t really like Melanee (Helen Gilbert) at all, and she certainly doesn’t like her in that way.

Joan Taylor’s performance as Ann is quite effective. She makes her just ever so slightly hardboiled but vulnerable as well and mostly she makes her ambiguous which is why the film requires. Adele Jergens is terrific as the totally amoral Jennie, as is Helen Gilbert as the frustrated lesbian Melanee. Phyllis Coates adds a disturbing touch as Ann’s other cellmate Dorothy, a completely insane murderess who thinks that every new prisoner is Lois, the woman she blames for the murders of her husband and son (of course Dorothy actually killed them in an insane rage after her husband ran off with this Lois woman). 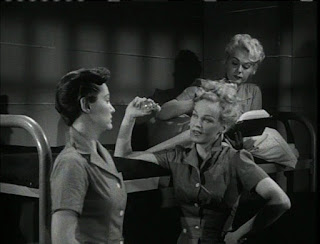 The weak link is the reverend. He’s way too good to be true and he’s irritating. It’s a credit to Richard Denning’s natural charm that he doesn’t come across as so irritating that he spoils the movie.

Girls in Prison ticks most of the women-in-prison boxes. There’s lesbianism, there’s a catfight, Ann gets a beating. Of course this being 1956 it’s all very much toned down and very tame compared to later WiP films. The one thing missing is the sadistic prison warder. All members of the prison staff are paragons of virtue and overflowing with kindness. On the other hand the women prisoners are an appalling bunch so we can still understand why Ann isn’t having a good time. As a crime thriller this movie isn’t too bad.

Girls in Prison is not just a B-movie it’s on the cheap end of the B-movie spectrum but it’s fairly entertaining in a mildly disreputable and slightly trashy way. Recommended.
Posted by dfordoom at 1:06 AM