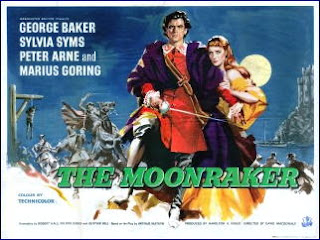 The Moonraker is a 1958 British swashbuckler with George Baker as a Royalist rebel in Cromwell’s England.

In 1651 Cromwell routed the Royalist army at the Battle of Worcester and Charles II found himself a fugitive. Luckily the Moonraker is on hand to help him escape the country. The Moonraker (who is in fact the Earl of Dawlish) is an unrepentant Royalist who had vowed to kill a Roundhead every month as revenge for the execution of King Charles I. So far he has kept his promise. There is a price on his head but he has led the Parliamentarian armies a merry dance and despite their best efforts he remains at large, a constant thorn in Cromwell’s side. Cromwell increases the price of his head but the Moonraker merely takes this as a compliment. 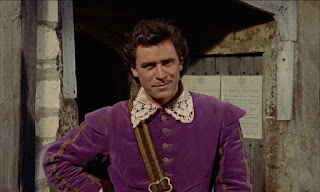 As the movie opens Charles II, accompanied by the Moonraker and one of his supporters, is just one step ahead of Cromwell’s New Model Army. The Moonraker has arranged for a ship to take the King to safety. Cromwell is determined to prevent the King from reaching that ship.

It’s all just an excuse for a series of adventures, and the movie provides all the action required of the genre. There is swordplay aplenty and an abundance of narrow escapes. 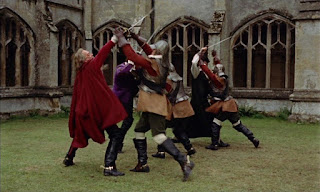 Of course anyone who knows their history knows that Charles II is unlikely to fall into Cromwell’s hands. The movie is clearly pro-Royalist but the focus is on adventure rather than politics and the viewer is spared any tedious speechifying. The Moonraker’s Roundhead enemies are portrayed as rather serious men with little sense of humour but the movie avoids making them outright villains.

Scottish director David MacDonald had a long if not terribly distinguished career. On the other hand he learnt his stuff serving as a production assistant to Cecil B. DeMille so it’s not surprising that he approaches his task quite confidently. He makes good use of some nice locations. The budget was by no means lavish but it was enough to get the period look fairly effectively. Mutz Greenbaum’s cinematography is suitably lush. 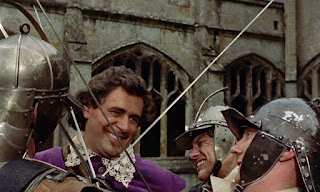 George Baker went on to become a familiar face in British television but before that he had a brief career as a romantic leading man. He’s no Douglas Fairbanks or Errol Flynn but he gives an enthusiastic and energetic performance which comes off quite well, and as usual he gives the role considerable warmth.

Marius Goring does well as Colonel Beaumont, whose job is to catch the fugitive King and the Moonraker. John le Mesurier was an unusual choice to play Cromwell but he gets away with it. Look out for Patrick Troughton (the second Doctor Who) as a Roundhead captain. Paul Whitsun-Jones goes close to stealing the movie as the bumptious but engaging Parfitt who makes his Royalist sympathies all too plain without any heed for the consequences. Peter Arne, an actor who specialised in villains, does good work as an itinerant Puritan preacher who is not quite what he seems to be, as does Sylvia Sims as the very pro-Parliament Anne Wyndham who finds herself torn between love and what she conceives to be her duty. 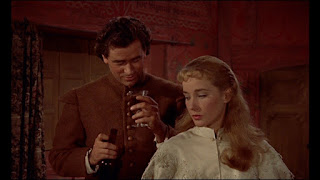 Optimum’s Region 2 DVD offers a splendid transfer, but without extras. The movie was shot in Technicolor and the transfer preserves the gorgeous colours extremely well. At the reasonable price being asked it represents good value.

The Moonraker is an entertaining and high-spirited swashbuckling adventure and fans of that genre (and I certainly number myself among that company) will have little to complain of. Highly recommended.
Posted by dfordoom at 6:52 PM