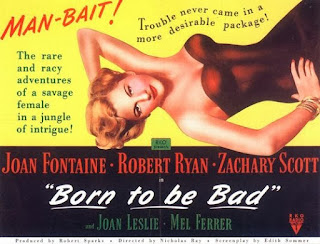 Nicholas Ray’s 1950 RKO feature Born To Be Bad is often categorised as a film noir. It does include some definite noir elements but really it’s a fully fledged melodrama. That’s quite OK with me since I happen to be extremely fond of melodramas. And this is a very good melodrama indeed.

Christabel Caine (Joan Fontaine) is penniless but ambitious. She is an orphan who has been living with her aunt and uncle but now she’s moved to the big city to share an apartment with her cousin Donna (Joan Leslie). Donna is engaged to the fabulously wealthy Curtis Carey (Zachary Scott).

On her arrival Christabel encounters Nick Bradley (Robert Ryan). He’s an aspiring novelist and to say that he’s a forceful character would be an understatement of epic proportions. It is both love and lust at first sight for both Christabel and Nick. Nick however has one major flaw in Christabel’s eyes. He is not fabulously wealthy, and she intends to marry a man who has that important qualification. Curtis Carey would be quite suitable for her purposes. The fact that Curtis is engaged to Donna is a minor detail in Christabel’s eyes. It is a detail she can soon take care of. But getting rid of Nick Bradley will be a problem. 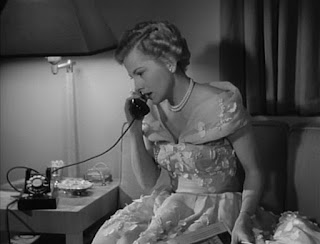 Floating around on the periphery is struggling artist Gabriel Broome (Mel Ferrer), whose portrait of Christabel seems a similar purpose to the portrait of the title character in Laura. One of the movie’s lighter moments is devoted to ridiculing the modernist rubbish that Gabriel paints. Gabriel is in some ways a more innocuous version of Christabel. He’s also on the make and he’s also a phony but at least he is open about it. He’s contemptible but harmless.

Christabel wants everything. She can’t have both Curtis’s money and Nick but that is exactly what she is determined to have. Whether she actually loves Nick is debatable. Whether Christabel could ever truly love anyone but Christabel is debatable. Her self-centredness is truly awesome to behold. Christabel can make any ordinary man do whatever she wants him to do, but as she will find out, Nick is not exactly an ordinary man. 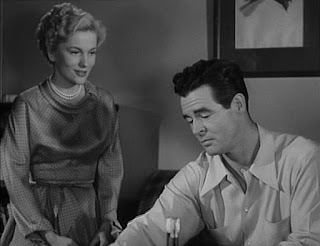 If you’re dubious about the idea of Joan Fontaine playing a femme fatale then think again. She is not only a great femme fatale, she qualifies as one of the all-time most dangerous examples of the breed. What makes Christabel so dangerous is that she seems so self-effacing and meek and apologetic. That’s all part of her technique. She has well and truly mastered the arts of passive-aggressiveness and manipulation. This is not the way any other actress would approach a femme fatale role but Fontaine knows exactly what she’s doing. Christabel is the evil twin of the meek heroines she usually played. As Christabel gets closer to her goal she slowly but surely throws off the assumed meekness. She is still as manipulative as ever but she has less need to hide it. She can now control people much more openly. Fontaine handles this gradual change with consummate skill. It’s a stunning performance.

Robert Ryan is the perfect complement to Fontaine. While Christabel is all calculation and ice-cold Nick Bradley is all emotion and passion and fire. In lesser hands Nick could have turned out to be obnoxious but Ryan is in full command of his performance and avoids that pitfall. He has charm, but it’s a frighteningly intense and passionate charm, if you can imagine such a thing. Ryan is constantly simmering with an animal sexuality that he makes no attempt to conceal. 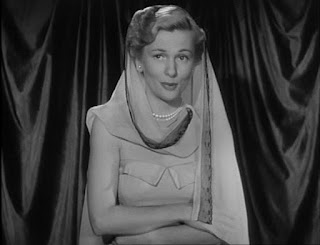 Joan Leslie is very good but she is totally overwhelmed by Joan Fontaine’s performance.

There’s a memorable scene between Christabel and Donna when Donna unsheathes her claws, while Christabel parries the thrust with her supreme command of the arts of self-pity and passive aggressiveness. That scene alone is worth the price of admission.

Zachary Scott is effective as Curtis, a well-meaning rather pleasant man who never had a chance once he got caught up in Christabel’s web.

I’ve never been much of a fan of Nicholas Ray as a director of film noir but this movie demonstrates that melodrama was his real forte. Nick Musuraca doesn’t get the opportunity to display his mastery of noir-style cinematography - this is not the sort of film that requires that kind of approach. 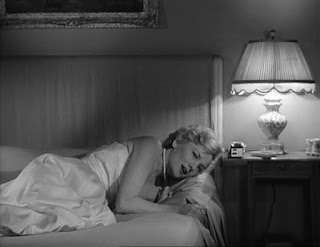 Odeon Entertainment’s Region 2 DVD is without extras (apart from a gallery of stills) but it’s a very good transfer and the price is very reasonable.

Born To Be Bad is melodrama at its best, played for real and not for laughs, and it’s immensely entertaining. It’s worth seeing for Joan Fontaine’s breath-taking perrformance but it’s worth seeing for plenty of other reasons as well. Highly recommended.
Posted by dfordoom at 1:19 AM