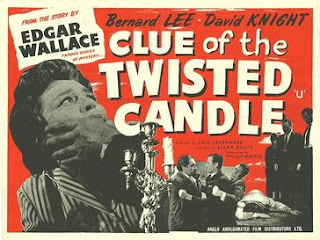 The Clue of the Twisted Candle was one of an extensive series of very low-budget B crime films based on Edgar Wallace mysteries made at Merton Park Studios in the early 60s. Oddly enough the production of these movies coincided with the German Edgar Wallace boom that produced so many wildly entertaining movies in the “krimi” genre.

Like the German movies the Merton Park B-features updated Wallace’s stories to contemporary times, mostly because this helped keep the budgets down. The British movies were true B-movies, intended to fill the bottom spot on double bills. They were later screened on American television as the Edgar Wallace Mystery Theatre.

The German Edgar Wallace movies were more outrageous, which made them more in keeping with the flavour of Wallace’s stories which belonged at the more outrageous end of the mystery thriller genre. By comparison The Clue of the Twisted Candle is more of a straight crime thriller although it does capture at least some of the authentic Wallace spirit. 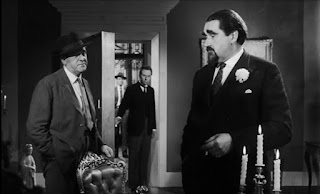 Wallace’s novels were immensely popular but were always regarded with a certain amount of derision by the literary establishment, even more so than the average crime novels of the period (Wallace published his last novel shortly before his death in 1932). The fact that they were considered to be slightly disreputable makes it appropriate that the movie versions should belong to the similarly slightly disreputable world of the B-movie.

The Clue of the Twisted Candle was based on a 1918 Wallace novel. A sinister and mysterious foreigner, Ramon Karadis (Francis de Wolff), has been attracting the attention of Scotland Yard. A young friend of Karadis’s, John Lexman (David Knight), has been the victim of blackmail. Lexman meets with the blackmailer, there is an argument, and the blackmailer is dead of a gunshot wound. Lexman claims, quite accurately, that it was self-defence but unfortunately the blackmailer’s gun is nowhere to be found. That makes things rather grim for Lexman. 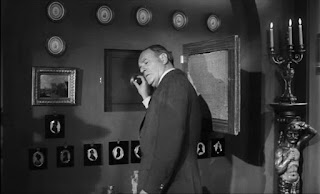 Lexman’s story is that the gun he was carrying was lent to him by Ramon Karadis. Unfortunately Karadis now denies this. In spite of the evidence against Lexman Superintendent Meredith (Bernard Lee) is inclined to think that the young man was set up by Karadis. But proving this will be difficult.

There’s also a mysterious Dr Griswold who seems to have some connection with Karadis although the nature of the connection is not clear to the police.

Bernard Lee makes a very satisfactory detective. As always his performance is understated and unruffled. The detectives in the German Wallace films tended to be somewhat more in the action hero mould but Lee’s Supt. Meredith seems more like an authentic British policeman. 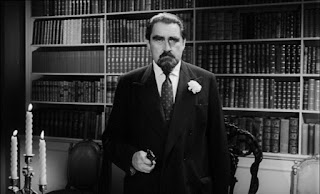 Francis de Wolff is nicely sinister as Karadis. His performance isn’t excessively over-the-top and this makes him seem more genuinely threatening. The elaborate iron door to his study is a nice touch. The supporting cast is perfectly adequate.

Director Allan Davis had a rather brief career in television and in B-features. He keeps things fairly simple, the low budget not really allowing for anything fancy. Philip Mackie’s screenplay, like Davis’s directing, gets the job done. The very short running time of 61 minutes ensures that the action does not drag. 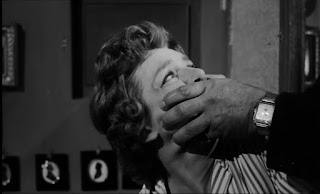 Network DVD have released all the Merton Park Wallace movies in a series of boxed set. The transfer is quite decent.

I personally find the German Edgar Wallace movies to be more fun but The Clue of the Twisted Candle is reasonably entertaining in its own unassuming way. As long as you don’t set your expectations too high and keep in mind that this is a very low-budget movie there’s no reason not to enjoy it.
Posted by dfordoom at 5:54 PM