Fallguy is an ultra low budget 1962 crime flick that’s included in Something Weird’s Weird Noir set. While the other movies in the set all possess some degree of weirdness this one really has nothing to distinguish it apart from its shoddiness.

It does at least have perhaps some very vague affinities with the world of film noir.

Ed Dugan is Sonny Martin, a harmless teenager with the usual teenage obsessions, cars and girls. After leaving the local juke joint his nifty little foreign sports car is passed by two cars. A guy leans out of the window of one car and lets rip at the other car with a shotgun. The car runs off the road and over a low cliff. Sonny, not having witnesses the shooting, stops to see if the occupants of the car are still alive. One of them is definitely alive, since he pulls a gun on the unlucky teenager. As we will learn later this was a bungled Syndicate hit and the target was mobster Dave Monarch.

Monarch may be alive but he’s in bad shape. He forces Sonny to drive him to the home of Dr Sam Johnson. Johnson is also a Syndicate member and Monarch doesn’t trust him but he’s a doctor and Monarch needs a doctor real bad. He orders Johnson to patch him up but then stumbles and falls, there is a scuffle, and now Monarch is really dead. And Sonny escapes from the house after Dr Johnson opens fire at him. 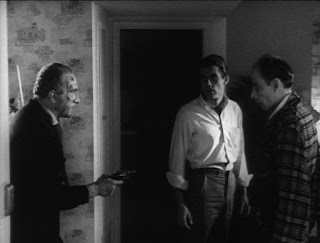 Syndicate boss Carl Tamin (George Andre), who ordered the hit, comes up with a plan to clean up the mess that the unsuccessful hitman (a bald-headed thug known only as The Indian) has made. Since Monarch’s blood is almost certainly in Sonny Martin’s car they will shift the blame for the murder on to him. With the help of the crooked chief of detectives the plan should work.

And it would have worked, except that Sonny tells the truth when he’s arrested and stubbornly sticks to his story. No amount of bullying or threats has any effect. If he keeps to his story when he appears before the coroner there’s a chance he may be believed. So Carl decides that an accident will have to be arranged for Sonny. He will be shot trying to escape. 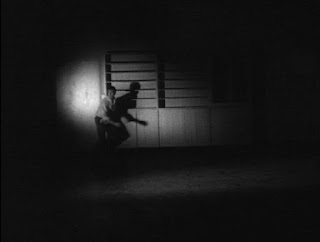 Unfortunately Carl’s gangsters are among the most inept in the history of crime. The Three Stooges would have done a better job than these guys. Sure enough the “accident” is bungled and Sonny really does escape. He has the police and Carl’s gangsters after him but he has little to fear from the latter. The Indian makes another mess of things. But surely eventually the police or the mobsters must catch Sonny, and before that happens Sonny has to find a way to prove his innocence.

There’s nothing especially wrong with the basic plot idea and there’s nothing wrong with the film-makers’ idea of trying to combine a gangster movie with a teen movie. It’s the execution of the idea that is the problem. And the acting. Especially the acting. The acting is uniformly awful, and unfortunately it’s not awful in an amusing way. It’s just plain awful. The bad acting does result in one highlight, a cat-fight between between two of Carl’s many women (his whole house seems to be filled with scantily-clad women). 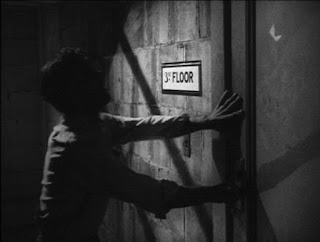 The very low budget is painfully apparent. The sets are basic and it’s obvious the film was made on a very tight shooting schedule which allowed no time for any fancy camera setups. The movie does have a dark noirish feel to it with lots of night photography although one suspects the dark feel was due more to budgetary constraints than deliberate stylistic choices. Still it works fairly well and the movie has a nicely seedy atmosphere. It has a similar feel to some of the exploitation movies of the same era, in which scenes were often filmed in the director’s own house.

Writers Richard DeLong Adams and George Mitchell don’t have much of an ear for dialogue. At least the plotting is reasonably tight. On the plus side the opening credits are very cool, and Jaime Mendoza-Nava’s jazzy score is quite good.

This was the only movie made by producer-director Donn Harling. It would be unfair to accuse him of being totally talentless. The pacing, so often a problem in very cheap movies, is no problem at all here and Harling packs plenty of plot and plenty of action into the movie’s modest 64-minute running time. He also pulls off one reasonably impressive visual set-piece, a chase sequence in an abandoned warehouse. It would have been interesting to see what this guy could have done with a more generous budget. 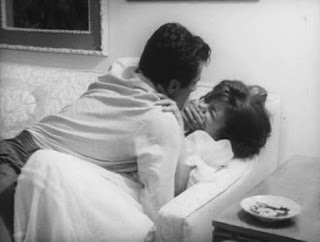 This is one of the six movies featured in Something Weird Video’s Weird Noir DVD collection. Considering the obscurity of this movie the transfer isn’t too bad. This is such a low budget movie that it probably didn’t look much better than this even in 1962.

Fallguy is a pretty terrible movie but it’s fascinating in the way that zero-budget movies often are. It’s sufficiently fast-moving not to be boring and if you’re feeling in a generous mood you might get some enjoyment out of this movie.
Posted by dfordoom at 10:37 AM