Demetrius and the Gladiators (1954) 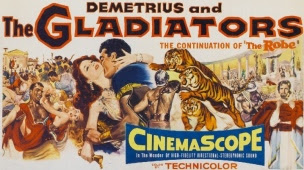 Demetrius (Victor Mature) is a Greek Christian who has been entrusted by the Apostle Peter with the keeping of the robe worn by Christ. Peter and Demetrius are careful to emphasise that the robe has a purely symbolic importance although there are others who will attribute magical powers to it.

Claudius (Barry Jones), the uncle of the emperor Caligula (Jay Robinson), convinces the emperor that the robe holds the secret of eternal life. Claudius has probably to some extent accidentally misunderstood the significance of the robe to the Christians but he also sees it as a way to curry favour with an emperor who is increasingly unstable, capricious and vicious. Caligula, who is already halfway to convincing himself that he is a god, now wants to get hold of the robe very badly. The emperor’s desire to possess the robe will land Demetrius in hot water.

In fact it lands Demetrius in Claudius’s gladiatorial school. As the head trainer of gladiators, Strabo (Ernest Borgnine), tells the latest batch of prisoners sentenced to the arena, it is not necessarily a death sentence. Strabo himself had been sentenced to the arena and succeeded in winning his freedom. For a Christian however who takes the Ten Commandments seriously (and literally) and who is therefore unwilling to kill it certainly is little more than a death sentence.

Demetrius makes an unlikely friend among the gladiators, the Nubian Glycon (William Marshall). As fate would have it Demetrius finds himself matched against Glycon, which means that one of them will have to die. There is but one chance - if they provide a good enough fight the emperor might be persuaded to spare the loser’s life.

The arena will change Demetrius’s life. It will bring him into contact with the notoriously debauched Messalina (Susan Hayward), the wife of Claudius. It will also lead him to question his Christian beliefs. Demetrius’s appearance in the arena will also have unexpected indirect consequences for Caligula, Claudius and Messalina.

Victor Mature is an actor that I find myself more and more impressed by. In epics such as this he managed to be both entertaining and sincere and his performance works very nicely. Susan Hayward has great fun (as you would expect from an actress who was never afraid of going over the top) as the wicked Messalina. Jay Robinson does well as the insane Caligula, making the emperor both creepy and menacing. Ernest Borgnine impresses as well while Barry Jones does a more than adequate job as Claudius, a man who in spite of unfavourable first impressions turns out to have more substance than expected. William Marshall has (as always) the necessary dignity for the role of Glycon, an ex-king reduced to fighting in the arena.

The weak link, as so often, is Michael Rennie. He gives a characteristic overly earnest and irritatingly smug performance as Peter.

With the competent Delmer Daves as director Demetrius and the Gladiators is surprisingly successful at combining action and spectacle with a Christian message which the movie delivers without being too heavy-handed.

The Region 4 DVD offers a reasonably adequate transfer but no extras.

Demetrius and the Gladiators is fine entertainment. It manages to be rather more than merely an exercise in camp (although fans of high camp will certainly find much to enjoy). Recommended.
Posted by dfordoom at 1:14 PM