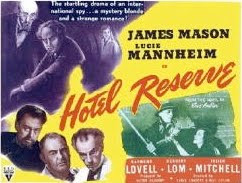 Hotel Reserve is a 1944 British spy thriller somewhat in the mould of 1930s Hitchcock thrillers like The Lady Vanishes. It combines suspense, some tongue-in-cheek comedy and a little romance.

A young Austrian, Peter Vadassy (played by James Mason), finds himself accused of espionage in France in 1938. On a seaside holiday at the Hotel Reserve he is indulging himself in his favourite hobby, photography, but unfortunately the gendarmes discover photographs of secret military installations on a roll of film he has left at the villag

e store for processing. He is innocent, but must somehow find the real spy in order to clear his name.

The movie benefits from a fine cast, with especially entertaining performances by Julien Mitchell as the French intelligence chief and Herbert Lom (always a delight) as one of the guests at the hotel. Mason is superb, a mixture of boyish charm, naivete, injured innocence and surprising resourcefulness.
Hotel Reserve is so

metimes mentioned as an example of a British film noir, and it does have some definite noir features. The second half of the movie becomes progressively darker in tone, and the photography starts to take on a very noirish look. The closing sequences in particular are all shadows and low-key lighting, and are very effective. Any movie based on a novel by Eric Ambler (a shamefully neglected and underrated writer today) is almost inevitably going to have an atmosphere conducive to film noir, Ambler’s specialty being the ordinary person caugh 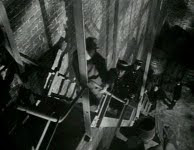 t up in a nightmare world of suspicion, danger and intrigue, a world in which no-one is quite what they seem to be and no-one can be trusted.

This is a well-crafted and thoroughly enjoyable little movie, a fine example of the superb mystery thrillers that the British film industry seemed to be able to turn out in abundance in the 1940s and 1950s.
Posted by dfordoom at 2:07 PM