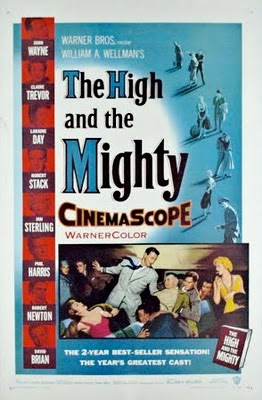 The High and the Mighty is the grand-daddy of all disaster movies. It was made in 1954 but every single feature of the disaster movies of the 70s and later is already present here, perfectly formed. It is in effect Airport 1954.

This is one of the many interesting movies made by John Wayne’s production company Wayne-Fellows Productions, later to become Batjac Productions. Their movies were always entertaining well-made quality motion pictures and quite frankly I’ll watch any movie made by Batjac.

The High and the Mighty is an airliner disaster movie, with a screenplay by Ernest K. Gann from his own novel. Gann was a flyer who wrote aviation-themed novels and was also responsible for an earlier Batjac picture, the excellent Island in the Sky.

Dan Roman (John Wayne) is a veteran pilot who had several years earlier been the only survivor of an air crash, an accident in which his wife and child were killed. This is the reason why despite his vast experience he is now a co-pilot. The accident may not have been his fault but he has to live with it for the rest of his life and potential employers are clearly unsure if his nerve is still sufficiently intact to employ him as a pilot.

The captain of the ill-fated DC-6 about to take off from Honolulu is John Sullivan (Robert Stack), an experienced pilot but one who is troubled by vague premonitions of disaster. And disaster does in fact strike. One of the plane’s four engines catches fire. The fire is quickly extinguished but the crew are left with two major worries - the wrecked engine has been twisted slightly out of position and is now causing extra drag, and fuel is now leaking from the wing tanks. The aircraft can certainly remain airborne on three engines, but will there be enough fuel to reach San Francisco?

The advantage of such a movie set on board a piston-engined DC-6 rather than a 747 is that we get to know every passenger, since the aircraft is only carrying a couple of dozen people. There is a flight crew of four, plus one stewardess. The stories of the principal characters are recounted in flashbacks. The requirement to make everyone on board the aircraft an individual means that this is a fairly long film, with a running time of 141 minutes. While the pacing is occasionally a little slow in general the film has no problem keeping the viewer’s interest.

It also follows the formula that would later become standard, with many of the passengers played by stars who were perhaps just a little past their prime. Nonetheless Claire Trevor for one gives a sparkling performance.

The main difference between this and later aviation disaster movies is that The High and the Mighty is much more believable. It’s the kind of mishap that could and did happen, and the crew of the aircraft respond in a realistic manner. There are some great flying sequences but the emphasis is on human drama rather than stunts and special effects.

There’s an interesting parallel set up between Captain Sullivan and his co-pilot. Dan Roman has been the trauma of an air disaster, while Sullivan now faces the same prospect and his nerves are clearly somewhat shaky. Dan obviously empathises with Sullivan but if the captain cannot pull himself together the chances of survival will be slim.

John Wayne didn’t see having his own production company merely as a way of setting up star vehicles for himself. In fact he often did not appear in these films at all. In this case he makes no attempt to dominate the film - he’s content to be part of an ensemble cast and to let his fellow cast members have their chances to shine. His own performance is extremely good but it’s nicely underplayed. Robert Stack isn’t everyone’s favourite actor but he’s effective here. The supporting cast is uniformly good.

Director William A. Wellman just loved making aviation movies and he’s in his element. This is not only the first movie in its genre, it’s one of the very best, tense and highly entertaining.

This is a movie that took a long time to reach DVD due to legal wrangles but it was worth the wait and the transfer is superb, preserving the Cinemascope framing and generally looking quite wonderful.
Posted by dfordoom at 6:24 PM