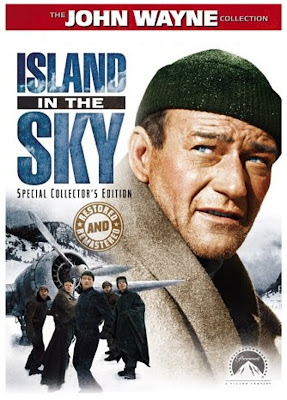 Island in the Sky is the fourth movie I’ve seen in the last couple of weeks that was produced by John Wayne’s own production company. And I’m becoming more and more impressed by Wayne’s achievements as a producer.

The four films I’ve seen have all been slightly offbeat and extremely interesting and all represent a perfect combination of commercial appeal and quality film-making.

This is actually the first one I’ve seen where Wayne himself takes the starring role. Actors often turn to producing in order to get more interesting parts and one of the things I admire about Wayne is that he didn’t seem to use his production company that way. His agenda appears to have been simply to make good movies, and if the lead role happened to suit him then he’d take that role. Island in the Sky is a war movie without any shooting. During the Second World War many commercial airline pilots served in the US Army Air Force’s Air Transport Command while still remaining civilians. They flew cargo planes to and from the various theatres of war often in extremely dangerous flying conditions. One of these pilots was Ernest K. Gann, and he used his wartime experiences as material for several best-selling books, including Island in the Sky.

Many of these wartime transport missions were flown in Arctic conditions where atrocious weather was not the only hazard. There was also the added complication that compasses no longer work accurately that close to the North Magnetic Pole. It was not difficult to become hopelessly lost. This was the fate that befell a C-87 transport aircraft in real life, and Gann’s novel and the film are based on this real-life story. In the movie a DC-3 piloted by tough Irish pilot named Dooley (John Wayne) loses its way in the frozen wastes of Canada. Dooley makes a successful crash-landing but neither they nor their ground controllers have any clear idea of their location. They have enough food for six days at the most.

A search is immediately instituted. Flying conditions are dangerous in the extreme but there’s no need to call for volunteers. The air crews flying the missions have an incredibly strong camaraderie and they are all determined to find Dooley and his four crew members. As Leonard Maltin points out on the commentary track a movie like this could never be made today - this is a movie about heroism without any irony or cynicism. In that sense it’s an old-fashioned film, but it’s old-fashioned in the best possible way.

Director William A. Wellman was a flyer himself so he has a kind of personal stake in this picture, and it shows. This is a celebration of the brotherhood of aviators, and while that may sound a little corny the movie has an integrity and an emotional honesty that makes it work. The huge cast is filled with interesting actors and a notable feature of the film is that even the most minor parts are brought vividly to life. Every actor in the movie gets at last one good scene, and every one of them makes the most of it. And that reflects the message of the movie, because this is a story not so much about individual heroism as collective heroism. It’s also a story about loyalty and comradeship. Again, they’re old-fashioned messages but there was a time when such values were considered to be important, and if we can’t understand that today then it’s our loss.

It’s also a visually stunning movie. One’s first impression is that the miniatures work is incredibly impressive. And then the realisation hits home - there aren’t any miniatures shots. It’s all done for real. When they needed to show a DC-3 crash-landing in the snow, they took a DC-3 and crash-landed it in the snow. William Clothier was in charge of the aerial photography, and he’d been doing this sort of thing for Wellman since they worked together on Wellman’s Oscar-winning Wings back in the 20s. It’s a movie that is tense, exciting and emotionally involving and always entertaining, a movie obviously made by people who cared about what they were doing. Highly recommended, but you’ll have to leave your cynicism at the door.
Posted by dfordoom at 5:10 PM