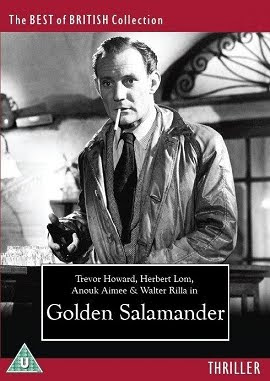 The Golden Salamander is the sort of movie the British film industry used to do supremely well - a solid unpretentious but well-crafted and highly entertaining thriller benefitting from a superb cast. This one has the added bonus of some great location shooting in Tunisia.

Trevor Howard plays David Redfern, an English archaeologist who has been despatched to Tunisia to retrieve a collection of Etruscan artifacts belonging to a British museum. The collection had been salvaged from a sinking ship and are now in the home of the wealthy and mysterious Serafis in a small Tunisian village. On the way to the village Redfern finds the road blocked by a landslide and has to abandon his car and continue the journey on foot in darkness and driving rain. He’s not the only one having problems - he passes a lorry that has ditched. And, fatefully, he accidentally discovers the cargo the lorry was carrying - guns. He has stumbled upon an international gun-running operation. Redfern has no wish to become involved and pretends to have seen nothing. Unfortunately the two men running the arms smuggling operation, Max (Jacques Sernas) and Rankl (Herbert Lom), are certain that he spotted them. And Rankl is a sinister and rather frightening figure.

Redfern finds that apart from the collection that he has to catalogue prior to its shipment to the UK the village has other distractions that are perhaps even more enticing. Most notable among these is a young and beautiful Frenchwoman, Anna (played by Anouk Aimée who at that stage of her career was known simply as Anouk). The attraction is mutual, although the situation is complicated by the fact that Anna and Max have been lifelong friends. Redfern is, against his will, finding that he cannot avoid taking some sort of stand in relation to the gun-running that Max is mixed up in. He tries to find an easy solution that will get Max off the hook, keep Anna out of the situation altogether, and clear the decks for his gradually blossoming romance with Anna. He will soon discover that there are no easy solutions, and finds he has become involved with murder as well as smuggling. Now Redfern can no longer avoid taking a moral stand but he has no idea of the scale of the criminal activity and corruption that he has inadvertently wandered into. And the gun-runners have decided that the meddling English archaeologist must be eliminated. For David Redfern the challenge now is to stay alive.

Director Ronald Neame had a long and varied career as a writer, cinematographer and director. He did not direct a huge number of films but his output included some remarkably interesting projects. He handles the directing duties on this film with considerable skill. Trevor Howard was of course one of the greats and he’s excellent as a man who is very reluctant indeed to become a hero, a man who thought he could go through life successfully ignoring things that were unpleasant or inconvenient. When he’s pushed too far he discovers within himself the strength to fight back.

Anouk Aimée is an engaging enough heroine. Herbert Lom gives one of his trademark vicious thug performances and he’s terrific as always. Miles Malleson as the village’s French policeman, Walter Rilla as the smooth but villainous Serafis and the always delightful Wilfred Hyde-White as a seedy but good-natured barfly round out the impressive cast. This is a movie that succeeds admirably in what it sets out to do - to be an entertaining thriller. And that’s enough.

Odeon have released this one in their Best of British DVD series which includes a multitude of lesser known but intriguing British movies. The DVD is all-region and the transfer is quite acceptable.
Posted by dfordoom at 9:08 PM