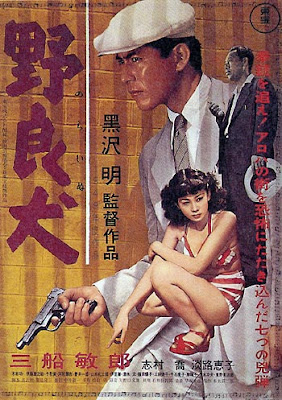 Akira Kurosawa’s 1949 Stray Dog (Nora inu) is a crime film that is often seen as an example of Japanese film noir. It certainly has many affinities to film noir and Kurosawa was almost certainly influenced by American film noir but there are some crucial differences as we’ll see.

Murakami (Toshirô Mifune) is a rookie homicide detective. His inexperience causes him to fall victim to a pickpocket on a bus, and his gun is stolen. He assumes he will be dismissed from the force for such an egregious failure but his chief has no time for that kind of self-pity and tells Murakami to get on with his job. Murakami becomes obsessed by the necessity of getting his gun back. The stolen gun will have fatal consequences and will also drive the plot. The gun is used in an armed robbery and Murakami is convinced that it’s only a matter if time before it’s used in a murder, and his sense of guilt takes him to the edge of self-destruction.

He is teamed with an older detective, Sato. This then becomes the classic cop movie combination of the wise old detective teaching the green youngster the ropes. The gun itself becomes merely a symbol, an example of the workings of fate but Kurosawa is mostly interested in how we respond to fate. Murakami’s quest for his lost firearm will take him on a journey into the seedy depths of the world of petty crime, a world of casual violence and nihilism. His fate becomes entwined with that of the man who now has his gun, a man who seems set on destroying himself and others with a vicious disregard consequences.

Like American noirs Stray Dog deals with the difficult adjustment to the new post-war world. But Kurosawa has little sympathy for those who use the war as an alibi for failure and despair. There are major differences compared to American noir (or French noir for that matter). The idea of wallowing in victimhood is explicitly rejected. Yusa and Murakami have both suffered from the blows of fate but the most important line of dialogue in the movie occurs when Murakami’s boss tells him that bad luck can be an opportunity or it can destroy you. What is crucial here is that it doesn’t have to destroy you. It only destroys you if you choose to allow that to happen.

The noir world of chaos and self-pity can be defeated. If Murakami chooses the path of duty, if he accepts that as a cop he has a job to do and gets on with it he will survive. Survival is a choice, a message you can’t imagine finding in an American or a French noir. Kurosawa’s movie is dark but there’s a fundamental optimism that is antithetical to the universe of film noir. Family and duty can bring salvation, another message you don’t normally associate with film noir. While Murakami feels some sympathy for the criminal the movie in general presents criminals as rabid dogs who must be destroyed. The violent world of the criminal is not glamorous, it is a squalid and pathetic world of losers.

The very fact that Kurosawa takes elements of film noir and puts them to his own uses makes this a particularly interesting film. This is one of Kurosawa’s less known movies but it’s arguably one of his best. Recommended.
Posted by dfordoom at 11:09 AM