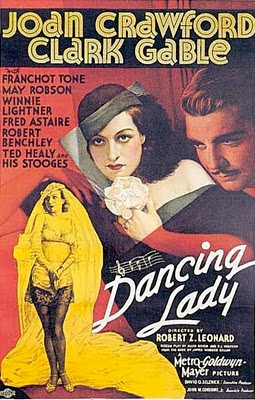 MGM’s 1933 musical Dancing Lady can be seen as an attempt by the studio to do something in the style of Warner Brothers’ 1932 hit 42nd Street. MGM couldn’t capture the hardboiled atmosphere that made 42nd Street so distinctive and they didn’t have Busby Berkeley but they did have plenty of money and they did have two great stars in Joan Crawford and Clark Gable. The result is lightweight but a lot of fun.

Its main claim to fame though is probably that it launched the film career of Fred Astaire. It’s an often overlooked fact that Fred Astaire’s first dancing partner in the movies was not Ginger Rogers but was in fact Joan Crawford. Even back in 1933 the plot was already hackneyed. Burlesque artiste Janie Barlow (Joan Crawford) will do just about anything to get her break as a dancer. Her opportunity comes when she meets rich dissolute playboy Tod Newton (Franchot Tone). He pulls strings to get her an audition with renowned Broadway producer Patch Gallagher (Clark Gable). Gallagher is tired of having wealthy backers trying to get their girlfriends into his show and tells his assistant to give her the brush-off but the assistant finally persuades him to take a look at her. He can see at once that she has potential, so now she’s got a job in the chorus line.

Tod isn’t really interested in furthering her theatrical career. He’s more interested in getting her into the bedroom than onto the stage, but she’s so single-minded about dancing that he figures that getting her into the chorus line will keep her interested and then when she realises how tough Broadway is she’ll be more inclined to accept her attentions. At last that’s his initial plan, but he soon realises that actually he wants to marry her. While Janie is kept busy fending off Tod’s attentions Patch has had second thoughts about his new find. He’s decided that she really is something social, that she just might have what it takes to become a star, and that he should take a big chance and put her into the lead role. She’ll be dancing opposite a well-established Broadway star named Fred Astaire. Naturally things aren’t going to work out that smoothly or that simply, the show faces cancellation and Janie faces the even more unpleasant fate of marriage to Tod, that being the only alternative she’s left with.

Of course it can’t end that way and somehow Patch will find a way to save the show, and Janie will get her chance. The unoriginality of the plot doesn’t matter in the least in a movie like this. What does matter is the charisma of the leads and the quality of the musical numbers. In both those respects Dancing Lady is on firm ground. They may not have had Busby Berkeley but the music is good and the production numbers are spectacular. At times surreal and even verging on the bizarre, but impressive nonetheless.

Crawford and Gable are both terrific and as always they have tremendous chemistry. As a dancer Crawford might not have been Ginger Rogers but she was still a pretty good hoofer. Her dance duets with Astaire are not as elaborate as the ones he would later do with Rogers but Crawford acquits herself extremely well. There’s a strong and rather varied supporting cast. Franchot Tone is reasonably good as the smooth but somewhat sleazy Tod. Astaire only appears in the dance routines. Robert Benchley is amusing as a slightly scatter-brained gossip columnist. There’s also the first movie appearance of Nelson Eddy. Plus there’s comic relief courtesy of the Three Stooges, a very strange touch that works better than you’d expect.

Robert Z. Leonard is one of those often overlooked directors. He was no auteur but he was a capable craftsman who could handle just about any genre, the kind of director who was the backbone of Hollywood in the days of the studio system. He does his usual competent job here. There’s not a huge amount of pre-code sex and sin here, but there is some. Janie does after all start her career as a strip-tease artiste, and there are a few risque moments scattered through the film.

This is not perhaps one of the great musicals of the 30s but it’s thoroughly enjoyable and it features Gable and Crawford at their most charming and likeable. Definitely recommended.
Posted by dfordoom at 1:12 PM