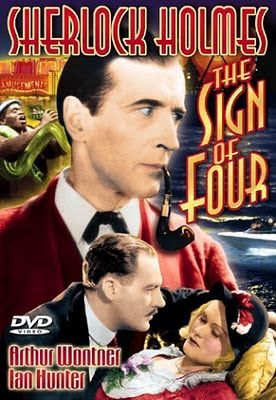 It’s almost impossible to count the number of actors who have played Sherlock Holmes on either the big screen or the small screen. One of the more successful, although now largely forgotten, was Arthur Wontner.

Wontner played the great detective in five British films between 1931 and 1937 (one of which is sadly now lost). The third of the Wontner Sherlock Holmes movies was The Sign of Four, in 1932. It’s a reasonably faithful adaptation of Sir Arthur Conan Doyle’s novel of the same name. The most interesting change is that whereas in the novel the mystery is revealed at the end (as you’d expect in a mystery novel) in the film it’s revealed at the beginning. The movie is therefore not so much concerned with the mystery as such, as with the way in which Sherlock Holmes solves it. It’s a perfectly valid technique and one that has been used with success by some very notable mystery writers. I’ll try to reveal as little as few plot details as possible in this review.

The mystery in this case revolves around a fabulous Indian treasure and an assortment of people who believe they have some claim on it although they’re all in fact thieves. The mystery begins with the daughter of a British Indian Army officer who inexplicably starts to receive gifts of extremely valuable pearls. She receives a letter explaining merely that the gifts are to right a wrong that has been done to her, and she suspects it has something to do with the mysterious death of her father. He had been stationed in the penal colony in the Andaman Islands. A plan of a fortress with four names on it (the sign of four of the title) will provide another clue.

Wontner makes a pretty good Holmes. There are even those who have claimed that he is the definitive Holmes. I don’t agree (I regard Basil Rathbone and Jeremy Brett as the two greatest interpreters of the role) but Wontner is perfectly acceptable. Ian Hunter is an adequate Watson. Director Graham Cutts was a major player in the early days of the British film industry, being a co-founder of Gainsborough Studios. He was apparently somewhat difficult to get along with and his career declined after the introduction of sound. His subsequent reputation has suffered due to the fact many of his movies have either not survived or are difficult to see. On the evidence of this film he was a talented director. For a 1930s British movie it features some rather bold stylistic flourishes, it’s well-paced and it’s exciting with a surprising number of action sequences (and includes an impressive speedboat chase).

If you’re a Sherlock Holmes fan this one is well worth watching. One of the chief obstacles to the enjoyment of this movie is the very poor quality of the public domain prints that are available. Both sound and picture are terrible. It’s a pity because it’s by no means a bad movie.
Posted by dfordoom at 7:51 PM