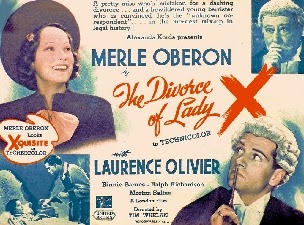 The Divorce of Lady X is a 1938 British romantic comedy starring Laurence Olivier and Merle Oberon. It is in fact an attempt to do a British screwball comedy. The results demonstrate how very difficult it actually is to carry off a successful screwball comedy, and they also suggest that this was a genre that was perhaps better left to the Americans.

Olivier is successful young barrister Everard Logan. He is unfortunate enough to get himself caught in a London pea-souper fog. The fog is so thick that his taxi driver gives up all hope of finding his way to Logan’s home and Logan accepts the rather sensible advice of a passing policeman to spend the night in the hotel outside which his taxi currently happens to be.

A fancy dress party is in progress at the hotel and the guests now find themselves stranded and forced to spend the night sleeping on couches in the hotel lounge, all the rooms having long since been taken. Leslie Steele (Merle Oberon) has no intention of sleeping on a couch and manages, by dint of some very devious manoeuvres, to persuade Logan to give up his bed to her. The unlucky barrister spends the night on a couch in the sitting room of his suite. 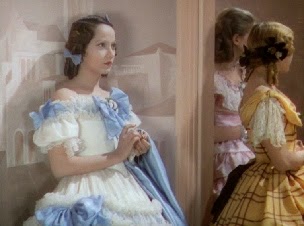 Leslie refuses to reveal her name, a factor that will become a major plot point.

Logan finds Leslie to be intensely irritating and in a screwball comedy that is of course a sure indication that he will subsequently fall madly in love with her.

Logan specialises in divorce work and this is where the complications start. The following Lord Mere (Ralph Richardson) asks him to handle his divorce. Lord Mere has learnt that his wife has spent the night with a man, at the very hotel Logan spent the night. Logan (in true screwball comedy style) leaps to the conclusion that the mysterious woman who tricked him out of his comfortable hotel bed was Lord Mere’s wife. He is aghast at the effect the scandal will have on his practice but at the same time he has now convinced himself that he is in love with the mystery woman. 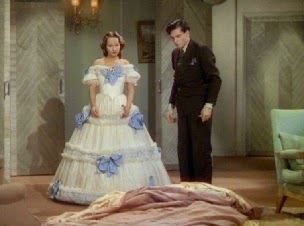 This brief plot outline demonstrates that the screenwriters understood the mechanics of the screwball comedy extremely well. There is however more to a good screwball comedy than the mechanics. Actual gags are required. The screenplay must not only have the right structure, it must exploit that structure to bring out the laughs. Witty dialogue is an absolute necessity, and the actors must know how to make the most of that dialogue. It is in these areas that The Divorce of Lady X doesn’t quite hit the target. It’s mildly amusing but there are very few laugh-out-loud moments. 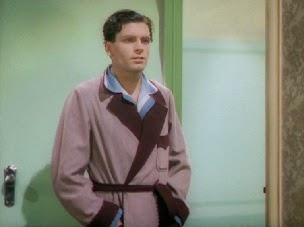 Olivier does his best and with a stronger script he would have been excellent. Much the same applies to Merle Oberon. Ralph Richardson is much more successful, being an actor who was much more at home with comedy and having the ability to make moderately funny dialogue seem more funny than it actually is.

This movie was, rather unusually for a British production of this era, shot in Technicolor. Alexander Korda was perhaps the most ambitious producer in Britain in the 1930s and was always willing to spend serious money. The early fancy dress scenes look marvelous and one suspects that the fancy dress party was added to the script in order to justify the money spent on shooting in colour. 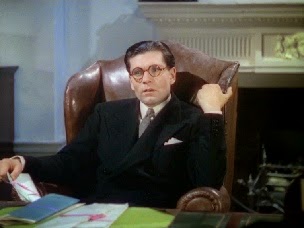 Despite these weaknesses it’s a likeable enough and reasonably enjoyable affair.

This movie’s Region 4 DVD release pairs it on a single disc with another early Olivier film, Q Planes, a much more interesting movie. The transfers are very good - the colours are bright and vivid in The Divorce of Lady X. It’s a double-header that represents good value.

The Divorce of Lady X doesn’t quite come off, but it’s an interesting near miss and it’s not without entertainment value. I can’t help feeling that a Hollywood director given the same material would have added a bit more bite. It’s still worth a look. Buy the two-movie set for Q Planes and consider this one as a bonus and you should be reasonably satisfied.