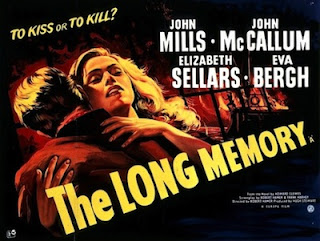 John Mills might not be the first name that springs to mind when someone mentions film noir but he made several interesting British noirs including, in 1953, The Long Memory.

When we first meet Phillip Davidson (Mills) he’s just been released from prison after serving a long sentence. He was innocent of the crime and he’s bitter and as we’ll soon find out he wants revenge. We then find out what actually happened in a flashback sequence. Davidson had been hoping to marry Fay Driver (Elizabeth Sellars). Her father, a grizzled and drunken old sea captain (actually the skipper of a broken-down old tub), is mixed up in some very shady activities with some very shady people. There is a confused confrontation and then a fire breaks out on board. A body is found and Davidson finds himself facing a murder charge. All the witnesses lie at the trial but there is one betrayal that is especially painful. Davidson is convicted. He escapes the hangman’s noose but he serves twelve years and that’s not an easy thing to forget or forgive. 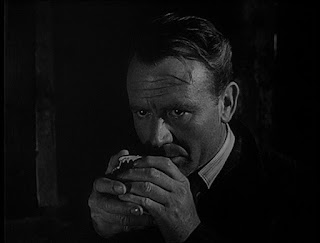 Davidson wants to track down three people, the three people whose evidence sent him to prison. Finding two of them is easy enough but the question is what is he going to do once he finds them?

Superintendent Lowther has had a tail on Davidson from the moment he left prison. Lowther was the man who arrested Davidson but the police had no reason to think, at the time, that there were any doubts as to Davidson’s guilt. He is however concerned by a report from the prison governor. Lots of convicted criminals vow to get revenge on those they blame for putting them inside but it’s unusual for them to nurse a grudge for twelve years. Lowther believes it’s very possible that Davidson may really be intending to take his revenge. Lowther is a good cop and in this case he hopes to prevent a crime. There is another reason for the Superintendent’s concern. One of the three people Davidson is looking for is the Superintendent’s wife. 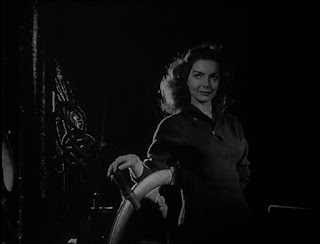 Also taking a keen interest in the case is a reporter named Craig (Geoffrey Keen). He knows that there could certainly be a story here. Craig is a good reporter but he has a conscience as well (I know such a thing is wildly implausible but it’s a case where you have to suspend your disbelief).

We can understand Davidson’s desire for vengeance but at the same time we know that this time he could destroy his life completely and he’s basically a good man and we don’t want that to happen. Especially when, quite by chance, he stumbles onto something that could make his life worth living.

Unfortunately he has set certain events in motion and now, even if he were to change his mind, he may not be able to stop those events from unfolding in a way that could bring ruin to both the guilty and the innocent.

Robert Hamer was a very fine and justly celebrated director who contrived to wreck his own career through his weakness for the bottle. He does a fine job here. 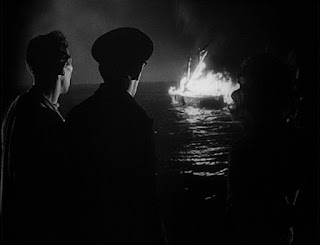 This was an A-picture so there was enough money for at least one action set-piece, and it’s a reasonably satisfying one.

This movie has plenty of noir credentials. There’s a plot that is a web of lies and betrayals, there’s plenty of moody cinematography and there’s a protagonist who is a decent man who has fallen into the noir abyss and given way to impulses that might well lead him to destruction. There’s a delightfully sinister villain. There’s a Femme Fatale and there’s a Good Girl character as well. The question is whether the Good Girl can save him by persuading him to accept her love.

Mills does the noir protagonist extremely well. Davidson is an embittered man driven by a slow cold anger but we do get glimpses of the basic decency underneath. He’s trying to be hard and merciless but he’s going against his own nature. Mills was always wonderful at playing very solid and very noble heroes but he had a surprising talent for much darker and more tortured characterisations, a talent that made him ideal for film noir.

Fay belongs to the Ambiguous Femme Fatale category. She’s not an evil spider woman but rather a woman who has been put in a difficult situation and has chosen the morally wrong course of action. She has certainly managed to ruin Davidson’s life just as completely as any spider woman. 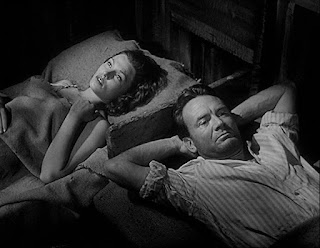 Ilse is the Good Girl. She’s a kind of stray puppy who follows Davidson home, home being the burnt-out shell of the barge that was the scene of the fatal fight that landed him in prison. Davidson wants to kick her out because he’s trying to convince himself that all he now wants out of life is revenge but she’s such a sad pathetic puppy and she’s so obviously desperate for his love that it’s not easy to steel himself to be cruel to her. Norwegian actress Eva Bergh is able to make Ilse sweet without adding too much sentimentality.

The John Mills Centenary Collection II boxed set comprises seven movies and they’re a varied bunch, which is a reasonable reflection of the breadth of his talent. It includes a couple of noirish gems - Tiger Bay and The Vicious Circle. The Long Memory gets a pretty good transfer.

The Long Memory is a satisfying crime thriller. Purists may not accept it as full-blown noir but it has enough noir credentials to please most viewers and it’s very definitely entertaining. Highly recommended.
Posted by dfordoom at 11:50 PM