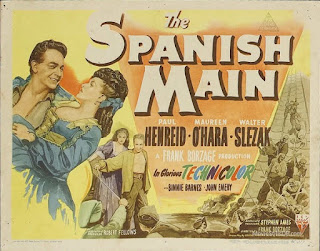 I’m quite a fan of pirate movies but RKO’s 1945 The Spanish Main, directed by Frank Borzage, is not exactly one of the classics of the genre.

Pious Dutchman Captain Laurent Van Horn (Paul Henreid) is sailing to the New World to start a new life but he falls into the hands of the wicked Spanish when his ship runs aground near Cartagena. The wicked Spanish viceroy Don Juan Alvarado (Walter Slezak) throws him into prison. Vam Horm escapes and becomes the dreaded pirate known as the Barracuda.

A beautiful Spanish contessa (played by Maureen O’Hara) is one her way to Cartagena to become the Alvarado’s bride. Her ship is captured by the Barracuda and she is forced to marry the pirate. She has already been acquainted with him and is oddly attracted to him. Whether she has really married him against her will is a moot point. 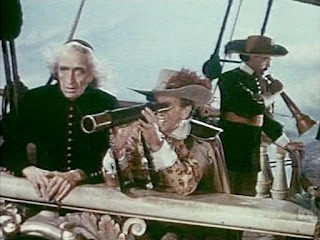 Of course the Contessa Francesca and the Barracuda hate each other at first before realising that they’re actually madly in love.

Van Horn’s motives for marrying the Contessa soon become clear. He wants revenge against Don Alvarado and plans to use her as bait in his plan to destroy the wicked Spanish tyrant. Of course he eventually realises that he truly loves her.

There are complicated and tedious plots and counter-plots by Van Horn and Alvarado as they seek to destroy each other, while Van Horn’s schemes cause much dissension among the Brethren of the Coast (a sort of pirates’ trade-union). It all ends with the expected showdown between the Barracuda and Don Alvarado. 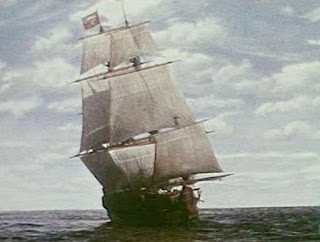 This movie starts with some pretty decent action scenes including a full-scale sea battle. There are some lesser but still reasonably good action moments later on. This was RKO’s first Technicolor production, the cinematography is excellent and by RKO standards it’s quite lavish.

The Spanish are always cast as the villains in pirate movies set in this era but this has to be just about the most hysterically anti-Spanish movie I’ve ever seen. The Spanish are depicted as cruel, treacherous, bloodthirsty monsters but they’re also depicted as incompetent buffoons. The pirates on the other hand appear to be a mixture of courageous freedom fighters and priggish social workers. OK, it’s just a pirate movie, but even by pirate movie standards this is juvenile and unconvincing nonsense and it makes the movie tiresome. 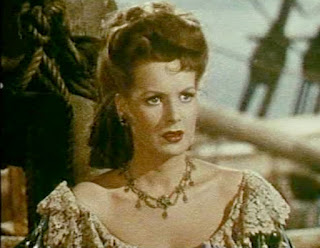 The big problem is the casting. The movie was apparently Paul Henreid’s pet project and he was the one who sold RKO on the project. Unfortunately he just doesn’t have the charisma or the personality to be swashbuckling hero. He seems more like a country parson than a pirate. He may be the dullest swashbuckling hero in cinematic history and he pretty much sinks the whole film.

Maureen O’Hara made quite a few swashbucklers and her performance is as spirited as usual although the plodding and rather feeble script by Herman Mankiewicz and George Worthing Yates doesn’t give her much to work with.

The supporting cast is mostly dull. 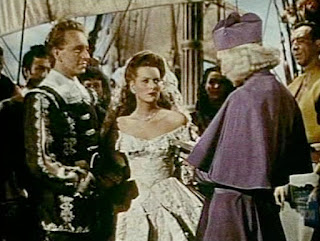 The one bright spot is Walter Slezak as Don Alvarado. He’s a cartoon villain but Slezak’s performance is sparkling and witty and immensely entertaining. He’s the bad guy but I was rooting for him to win and hoping that at the end he’d get to hang those sanctimonious pirates.

The whole movie is the usual collection of clichés, executed with a noticeable lack of energy and style. With a decent swashbuckling hero, an Errol Flynn or a Tyrone Power, it might still have worked. With Paul Henreid as the hero it all falls terribly flat. The Spanish Main looks good but even Walter Slezak’s wonderful performance can’t keep this one afloat. Not recommended.
Posted by dfordoom at 6:39 PM