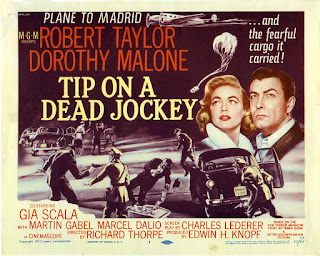 Tip on a Dead Jockey is a 1957 crime thriller with a definite noirish tinge and an aviation background, which certainly sounds rather promising.

Phyllis Tredman (Dorothy Malone) goes to Reno, for the usual reason, but finds it’s not as easy as she imagined since she seems to have no valid grounds for a divorce. In fact when she thinks about it she realises she has no idea why she is getting divorced. All she knows is that her husband Lloyd wrote to her from Madrid (where he has been living apart from her for nearly two years) asking her to divorce him and he gave no reason. So she decides that perhaps she should go to Madrid and find out what is going on. What she discovers is not quite what she expected.

Lloyd Tredman (Robert Taylor) seems like a pretty nice guy but there is something that is not quite right about him. He’d been a flyer, and a very good one, in both World War 2 and the Korean War. Now he seems to be drifting. His life seems too irresponsible and precarious for a middle-aged man. 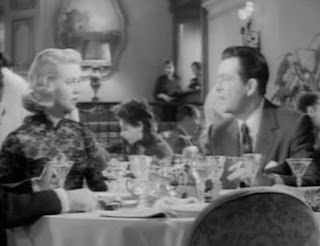 It doesn’t take long for us to find out what the problem is. He can’t fly any more. He’s lost his nerve. That obviously limits his career prospects (flying is what he’s trained to do and after the war he’d been an airline pilot) but it does more than that. As his buddy Jimmy Heldon (Jack Lord) remarks, when a flyer can’t fly any more there are other things he can’t do either. This is clearly something that is eating away at Lloyd’s soul.

And now Lloyd is in trouble. He’s in big money trouble. He’s been making his living mostly from gambling and he’s had some bad luck (although it’s possible that luck actually had nothing to do with it). There is a way out. He’s been offered an enormous amount of money to do a very simple job. It’s not exactly legal but it appears to be almost risk-free and it also appears to be not really immoral. The problem is that it involves flying. 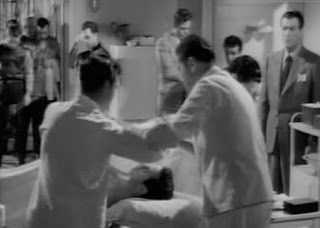 Now the crime thriller and romance sub-plots start to intertwine, and they do so surprisingly effectively. Lloyd allows both his fear of flying and his confused emotional life to persuade him to do something that is more than just dishonourable and cowardly. He then retreats into self-pity. This is starting to move towards real film noir territory, with a flawed hero tempted his own weaknesses into taking the first step towards ruin and degradation.

It’s all very promising but then it starts to pull its punches a bit. Of course it’s always worth remembering that no-one in Hollywood in the 40s or 50s was consciously making film noir. In retrospect we read film noir themes into many of the crime films of the era but at the time the film-makers were just making crime movies. If you accept this movie simply as a crime movie it works quite well with the darker moments being a bonus for modern film noir fans. 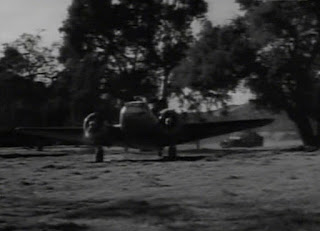 By the late 1940s Robert Taylor was starting to look just a little weather-beaten which might explain why he started to get offered some slightly darker roles, often in movies that were at least borderline film noir. These roles turned out to suit him perfectly. He could do the hardboiled thing, he could play tortured characters but most of all what he was particularly good at was conveying world-weariness. Not exactly cynical world-weariness, but world-weariness with a touch of pessimism and a touch of fatalism. That’s exactly what his part in Tip on a Dead Jockey requires and he’s superb.

Dorothy Malone gives a fine performance as the sympathetic wife trying her best to understand the struggle her husband is having with his private demons. Jack Lord is pretty solid as Lloyd’s buddy Jimmy. 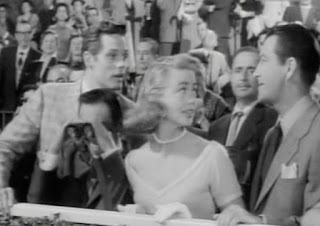 The single most surprising thing about this movie is that Robert Taylor sings! He does a duet with Dorothy Malone, and it’s a song with lyrics by P.G. Wodehouse, not quite what you expect in a movie such as this. It’s only a single musical number but it does achieve its purpose in letting us know something about how Lloyd and Phyllis really feel about each other.

Tip on a Dead Jockey was made in Cinemascope and gives the impression of having had a fairly decent budget, and it’s an MGM production so it certainly doesn’t look cheap. Robert Taylor was still a fairly big star. This all suggests that the movie was either a cheap A-picture or at the more expensive end of the B-picture spectrum. Content-wise however this is pure B-movie stuff.

Which is fine, I like B-movies. There are some decent aerial sequences, Robert Taylor is extremely good, there’s some suspense and some romance. It’s not a great movie but it deliver perfectly adequate entertainment. Recommended.
Posted by dfordoom at 5:16 PM