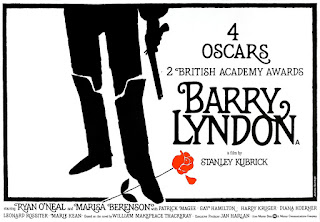 Barry Lyndon was released in 1975 and is in every way a typical Stanley Kubrick film. It’s visually breathtaking. It’s also entirely lacking in emotion, but deliberately so. Kubrick does not want us to care about any of the characters in the film. He wants us to regard them in the same dispassionate way that he views them. It’s a movie you may or may not enjoy but in its own way it’s an extraordinary movie.

It was based on a very minor novel (The Luck of Barry Lyndon) by Thackeray and again this is almost certainly a deliberate choice on Kubrick’s part. Had he chosen to adapt a better known Victorian novel there’s the danger that the audience might have been familiar with the book and might therefore already have formed an opinion about it. It suits Kubrick’s purposes to choose a novel that very few people have read.

Thackeray was the inventor of the so-called "novel without a hero” and this is indeed a movie without a hero. Thackeray’s much more famous novel Vanity Fair would have suited Kubrick’s purposes equally well except that it’s too widely known and the audience would have preconceptions about it.

Barry Lyndon is not even a real anti-hero. An anti-hero is someone about whom we have some feelings even if they’re mainly negative. Barry is simply a non-hero. We don’t care enough about him to dislike him and the whole movie is so detached that it’s difficult even to work up disapproval for Barry.

There’s only one character in the movie who could potentially function as a hero, and that’s the young Lord Bullingdon, but he’s almost as unsympathetic as Barry and definitely not the stuff heroes are made of. 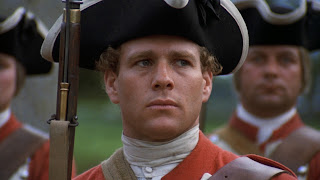 The protagonist (played by Ryan O’Neal) starts life as Redmond Barry, an Irishman born into modest respectability but penniless due to the untimely death of his father in a duel. Another duel will be the crucial event that launches Barry on his career (and a third duel will have equally momentous consequences). Barry suffers misfortunes and joins the British army and participates in the Seven Years War (an extraordinary cynical and senseless war brought about by the breathtaking amorality of Frederick the Great and which therefore serves as the ideal background to the story). Barry deserts and ends up in the Prussian service (a byword for brutality). Barry has no intention of remaining a humble soldier. He waits patiently for his chance of escape (he is a man who does not make things happen but he is extremely adept at recognising opportunities when they fall into his lap).

Barry’s fortunes prosper when he teams up with the Chevalier du Balibari (Patrick Magee), a professional gambler and amateur libertine. It has taken a series of betrayals to get Barry into this favourable situation but betrayal comes very easily to him. By the halfway stage of the movie Barry’s lack of morals, his eye for the main chance and a certain amount of luck have propelled him to the top of the social heap. He marries a fabulously wealthy widow. He has everything he ever desired. He has done little to deserve it. In the second half it all starts to fall apart for him, partly through his own flaws and partly through bad luck.

Much nonsense has been written about the supposed miscasting of Ryan O’Neal in the title role. In fact O’Neal is perfectly cast in every way. Barry Lyndon is a man with considerable ambitions and with a talent for opportunism but he has no morality and no beliefs and no personality to speak of. He takes on the colouring of his surroundings. O’Neal’s performance has just the right quality of complete emotional detachment but then in the rare moments that Barry has to display genuine emotion O’Neal rises to the occasion. It’s a perfectly judged performance and it’s obviously exactly what Kubrick wanted. 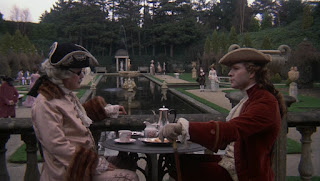 Marisa Berenson can’t act but that doesn’t matter since her role is more a modelling assignment than an acting job - her task is to look right and she does. She’s part of the decor really.

Hardy Krüger of course can act and he does a fine job as the Prussian Captain Potzdorf who manages to get the better of Barry for a while but is eventually betrayed by him.

Patrick Magee was a Kubrick favourite and he gives another outrageous but wonderful performance as the deplorable Chevalier du Balibari.

It’s often been remarked that almost every scene in this movie looks like a painting. There’s considerable truth to this. It’s a movie that is more a series of striking visual images than a conventional movie. There is a straightforward narrative here but it’s of little importance. No-one could possibly care what Barry’s ultimate fate is going to be. The images don’t serve the story. The story serves the images. Kubrick gets away with it because the images are so incredibly gorgeous. If there’s ever been a more beautiful movie than Barry Lyndon then I’ve yet to see it. 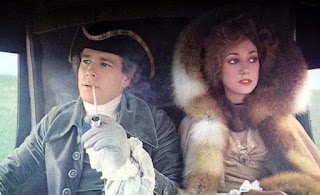 Kubrick was insistent that he wanted to use only natural light. If a scene took place by candlelight then the lighting for that scene would be provided entirely by candlelight. Special lenses and very fast film made it possible to do this and there’s no question that the film not only looks superb, it looks superb in a very distinctive way. It has a look that is quite different from any previous historical epic. Cinematographer John Alcott, set designer Ken Adam and costume designers Ulla-Britt Söderlund and Milena Canonero all won richly deserved Oscars for this movie.

Barry Lyndon is a movie that is worth seeing for its intoxicating images alone. In fact they’re enough to make it a must-see movie. It’s interesting as an epic without a trace of heroism. Like most of Kubrick’s better movies it’s just not like other people’s movies.

It’s an amazing technical achievement but was it really a worthwhile exercise? Was it a movie that was actually worth making? The answer to that pretty much depends on how you feel about Kubrick. If you’re a Kubrick sceptic then Barry Lyndon will probably confirm all your doubts about him. If you’re a Kubrick fan you’ll be overjoyed because this movie is the concentrated essence of Kubrickian film-making. It’s not a movie with anything profound to say. The protagonist sacrifices anyone and anything to achieve his ambitions and then finds that maybe it wasn’t worthwhile after all. Not exactly dazzlingly original. What is profound and original is the way it’s done - the extreme lack of any trace of heroism, the uncompromising refusal to manipulate the audience’s emotional responses or moral judgments and the unique style. I think it’s enough to justify the movie.

And I’m going to highly recommend this one because even if you end up not liking it it’s still one of those movies you have to see at least once.
Posted by dfordoom at 4:32 PM